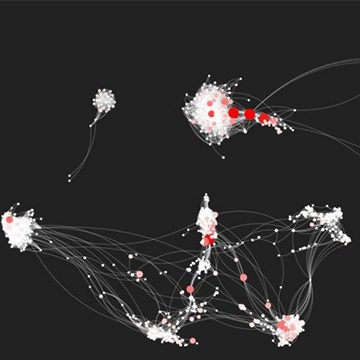 In December 2013, specialists from the worlds of Human Sciences and Data Processing Technology, two previously distinct fields, joined forces to develop the Algopol Project: in-depth analysis of the dominant behavioural styles impacting on the interactions of Facebook users.

In order to carry out an initiative of such magnitude, a cutting-edge partnership between Linkfluence, The University of Paris 7, Paris School for Advanced Studies in the Social Sciences, The French National Centre for Scientific Research and the Orange Labs was formed.

The next stage of the project saw researchers seek to understand the implications of these user preferences. Simply put, each piece of shared content generates a ‘source’ that reflects a certain individual preference, serving as an ‘interest indicator’.

Relatable patterns of interests were identified in over 270,000 analysed sources. This data was then mapped by Linkfluence: the cartographic overview is shown below:

Linkfluence has delivered cartographic visualisation studies such as this since 2006. In terms of analytical depth, the Algopol Project sets a new standard for research methodologies designed to manage data sets of this scale. This landmark in the history of Linkfluence introduced a modus operandi that continues to lead all client-driven and independent cartographic studies: powerful data analysis, well founded academic approach and bespoke research methodologies remain at the heart of Linkfluence.