Automotive Brand Tracker: Which Car Brands are US Consumer Favorites?

Like the old saying goes...you never forget your first. Wherever you’re from in the world, your first car is a love affair with trivial studies confirming that car owners go so far as to name their vehicles. In most countries you can drive before you're old enough to vote, making it symbolic as the first step and transition into adulthood. Americans in particular have a special relationship with cars exemplified through rich history, prohibition and pop culture.

Considered ‘land of the free’ and ‘the American dream’, there's a national psyche historically influenced by laissez faire and self reliance. Owning a car is closely linked to the founding ideals of freedom, autonomy and the pursuit of happiness, so in the words of Bruce Springsteen ‘roll down the window and let the wind blow back your hair’.

The automotive industry in America

In 2010 the number of vehicles worldwide surpassed a billion for the first time. The leading contributors to this milestone are world superpowers China and the United States, both in terms of sales and production. The US is infamous for the first ever mass production of automobiles and thanks to marketers evoking core American values, major consumer brands like Ford, Chrysler and Chevrolet remain popular around the world. These signature brands are deeply embedded into US society and culture, but we’re noticing a shift in consumer preferences….

Since we’re notoriously curious data geeks, we analyzed the brand equity of the top brands in the US automotive industry. We compared global brands and measured the gap between what a brand thinks it stands for vs. what consumers are actually thinking.

You may already be familiar with the concept of measuring social brand equity. In this increasingly digital era, it's hard to keep up with the noise around your brand, so we developed a framework as an additional means to measure voice online so that you have eyes and ears all over your market.

(Social media monitoring using limited positive and negative sentiment is a thing of the past.)

Using the ADPR framework of our Social Brand Tracker, we defined a set of metrics to understand consumer voice around your brand.

And it's with this framework that we analyzed over 5.69 million social posts about cars and the automotive industry in the US. We categorized and compared how different car brands are discussed and perceived by US consumers.

Under the relevance KPI, our social data researchers defined 8 industry drivers with which we used to benchmark how brands measure up against each other, and with themselves (over time): 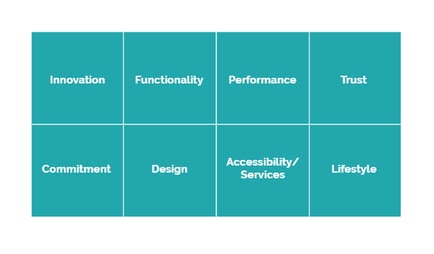 Note: These industry drivers are customizable depending on your industry and brand goals. For beauty brands, the set of drivers would look very different: 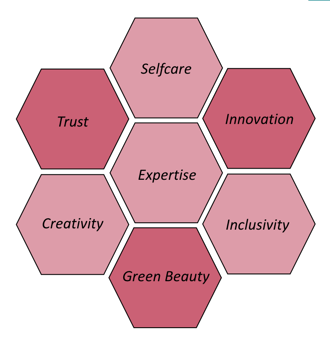 Why are these drivers useful?

Having a set of brand and industry drivers allow us to qualitatively measure social media chatters for a brand and its key competitors. Concretely, it allows you to:

Out of the 5.69 million posts we analyzed, 9 of the 11 top brands discussed on social media were American and Japanese. Our research found that older, more historical US brands lead in brand awareness and visibility, with Ford and Chevrolet receiving the most mentions. It’s a clear indication that these brands are creating enough awareness to influence conversations around them.

These emblematic brands consistently met similar results throughout the research, performing above the other 9 brands in the performance brand pillar.

'Muscle cars' among the most popular car models

We can attribute this awareness to years of popular culture, blockbuster cinema and entertainment. Car lover or not, the Chevrolet Camaro in Transformers, or simply Bumblebee to the lesser experts out there, is a modern legend and one of America's greatest muscle cars. 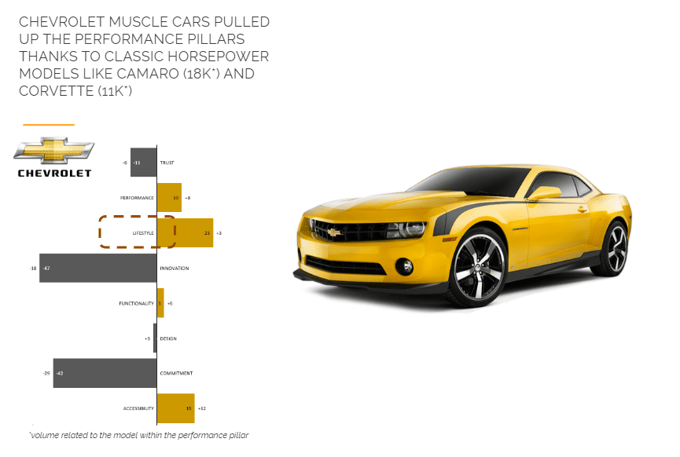 Coined in the 70s and 80s, it describes the modification of mass produced cars into high performance sportsters. Characterized by rear wheel drive, V-8 engines (the first of their kind), affordability and speed, it was a genre born out of rebellion.

The story starts during the 1920s prohibition when bootleggers and moonshiners modified their engines to outrace authorities. Once prohibition ended and alcohol was legal again, they continued to use these cars for street racing, going on to inspire one of the first NASCAR V-8 engine designs, the Oldsmobile 88.


Equally as iconic as the Camaro, is Ford’s infamous Mustang model. These 2 cars, like their brand proximity confirms, have a 50 year legacy with one another. The Camaro was actually designed and built to compete with the 1964 Ford Mustang, and with only 3 years between them they grew up as rivals.

The Mustang actually made its first appearance onscreen in ‘Goldfinger’, the third James Bond movie, some months before it was officially introduced to market. This made it one of the first Mustangs EVER to be driven, and responsible for the birth of the Mustang trend.

This symbolism of American cars was continually cultivated over the years through popular culture and onscreen entertainment, slowly adapting to mass consumers at the time. ‘‘That 70s Show’ took viewers on a journey with one of America's most loved nuclear families. The whole show was iconically filmed around statement cars, including the 1969 gold Aztex Oldsmobile Vista Cruiser station wagon. On screen son Eric was hugely embarrassment to share the humble family car with his parents at the time, but the car became synonymous with his friends, their shenanigans and his first on screen kiss with neighbor Donna. In 2009, the Cruiser went on to be crowned third greatest television car of all time by MSN Autos.


It was during a national gas crisis that Eric’s WW2 veteran father, nicknamed Red, reluctantly purchased a 1976 Toyota Corolla to save money...a Japanese car.

“Yeah, it’s mine. I tell you the last time I was that close to a Japanese machine,

it was shooting at me.” Red.

Japanese cars are highly desired in the US market

These cars served as authentic props but also perfect nuggets of realism in terms of American values and politics. We can see vintage American cars are leading on brand awareness but when it comes to buyer intent, consumers are just like Red, leaning towards trusted, practical and affordable Japanese cars.

These brands were found to dominate in terms of desirability as Toyota's mentions confirm:

This conversion to modern day adapted family cars is a major trend in our findings. Out of 1.2 million mentions, Japanese brands Honda, Nissan and Toyota collectively dominated, making up 50% of the positive mentions. They also performed well on functionality and accessibility brand pillars. It's evident that consumer desirability is leaning towards Japanese brands, but are there operational reasons that explain it? 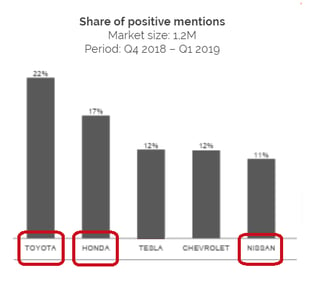 Possible contributing factors to the popularity of Japanese brands

Many movies tend to highlight the worst in salespeople – deceit, corruption, greed and immorality. The Wolf of Wall Street is the perfect depiction of success by any means possible. This age old stereotype perhaps, is something Nissan deliberately tapped into.

Along with being a more affordable brand, Nissan appears to have a whopping 1018 dealerships across the United States, not including Canada. We’re guessing this dense network could be a grassroots strategy to increase accessibility and reach more consumers. But in addition, we discovered sales managers conversing and sharing content with their happy clients on Twitter. Customers were happy to reciprocate and share their customer service journeys. This adoption of social to review products and consumer experiences is common, but to share direct conversations with sales people is still relatively unseen. Is this a social media strategy to generate more noise around the Nissan brand? 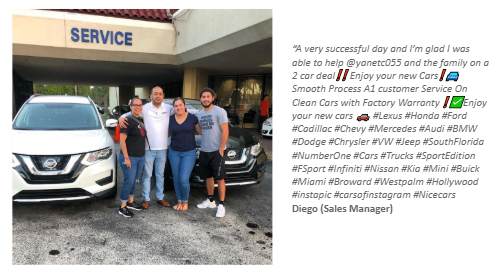 Growing up with a dad in the car sales industry, I can tell you this exaggerated stereotype is by no means true. Selling a car means cultivating long term relationships, late night calls, multiple test drives, favors and follow ups. Dealerships function on a localized level, making reputation and customer service key to generating more business.

Social conversations leads us onto our next topic of industry digitization. We found a third category of consumer, increasingly visible on social platforms with a preference towards electric cars. The brand found leading this consumer shift is of course Tesla.

A new category of car consumers

Opposing both traditional muscle cars and Japanese brands, this new generation of consumer has steadily emerged, shifting the direction of automotive engineering and sales.

Founded in 2003, Tesla disrupted the industry by pioneering the first road compliant all electric car. It’s no surprise it surpassed all other brands in our list in innovation, trust and commitment brand pillars. Let’s remember they sent the first car into space…

Powered by sunshine = $0.00/mile for fuel. Solar had paid for itself before I got the car. pic.twitter.com/OehnSna2Bb

Tesla has since gone on to create a range of vehicles, causing a mass disruption that forced all other players to innovate and release their own version of electric and hybrid vehicles worldwide.

McKinsey’s analysis suggests the global automotive industry is about to enter a period of trans formative and wide ranging change, as sales continue to shift and environmental regulations tighten. We can already see this happening thanks to Tesla’s disruptive technologies and shifting consumer behaviors. It inspired what we were calling ‘Eco tech style’, the next wave of conscious consumers with environmental concerns. The next 20 years will focus heavily on sustainability and the environment as this new paradigm begins.

To prove the cliche millennial stereotype exists, here's one below on her way to therapy, eating avocado toast in a Tesla:

here’s the most LA picture of me: trying to eat avocado toast in the Tesla on my way to therapy and instagramming about it. #iknowwhoiam

The future of the automotive industry is changing

The digital disruption of the automotive industry is one of many challenges and opportunities ahead. Is the dealership structure at risk of being replaced by online purchasing? Or will more brands adopt Nissan’s suspected social strategy and focus on increasingly personalized customer service?

McKinsey also identified the growing role of digitization in the actual driving experience. Alongside an environmental revolution, we can expect better connected vehicles to devices, social media and insurers, as well as autonomous vehicle technology. One thing is certain from our brand tracker report, this new paradigm will involve both sustainability and new technologies, reshaping our view of transportation.