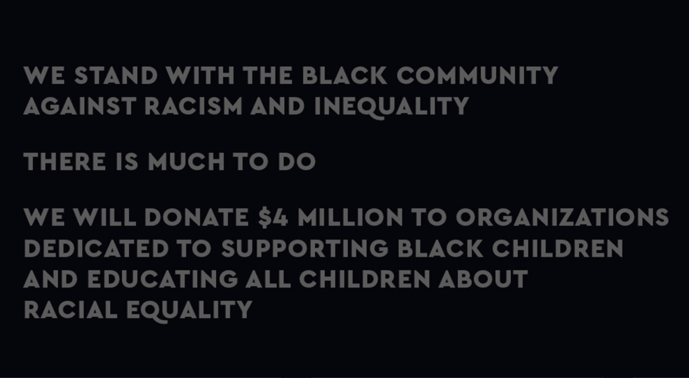 Working with social data on a daily basis provides a unique perspective on everything that’s happening in the real world. Today, this includes the world-wide racial inequality debate and the protests organised by the Black Lives Matter campaigners.

Might it be on Instagram, Twitter or TikTok, people around the world share messages of solidarity, learning resources and links to charitable organizations in order to educate and create a bond. The calls for an end to the police brutality and systemic racism black people face everyday are louder than ever before, accelerated by what’s happened to George Floyd in May 2020.

The social web is a place where many activist movements find home and the #BlackLivesMatter campaign is no different. The debate is heated and emotionally charged, with some key motivations being the major force. Some users feel the real shift is coming, visible in behaviours of some of the public and community figures. It’s also not hard to find angry users, either because they think what’s happening is not enough or, on the opposite side of the spectrum, it’s going too far.

The topic is highly political and brands might not want to engage or demonstrate their stance on the issue. For many, this would be a big mistake as people expect, even demand, organizations and corporations to actively contribute to political and social debates involving their customers. A survey run in 2019 showed that “74% of the consumers expect brands to take a stand on important issues”. After all, brands and consumers share the same world, thus are both affected by what’s happening. It’s important to highlight that what consumers expect is not a late opportunistic response to dramatic events. It’s genuine pledges to do better.

Where should businesses stand and, more importantly, how should they react? If some brands shined by their commitment in displaying a more inclusive attitude, those who haven’t stepped up yet might benefit from what we’ve discovered on social media - whose posts get more engagement when it comes to social movements, and why?

For brands willing to step up for the cause, the path is already paved

When it comes to engaging consumers through inspiring campaigns, several companies have showcased great initiatives. Regarding systemic racism and police brutality, there is one specific example that deserved a mention in this blogpost. In 2018, Nike released an ad featuring Colin Kaepernick. The American NFL pro player sparked outrage when he chose to kneel for the national anthem to highlight police brutality and the discrimination people of colour in the US face every day. His actions made him a new symbol of the civil right movement, but the controversy surrounding his decision generated equally negative press well before the ad's release, and it quickly went viral. 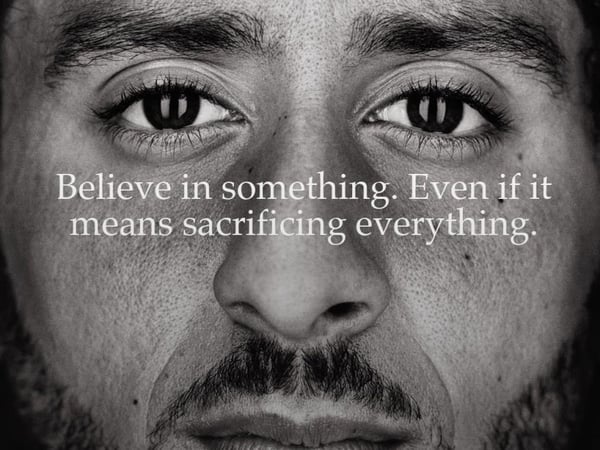 Following the decision to choose Kaepernick as one of their brand ambassadors, Nike faced protests and boycott threats but also won many plaudits for its clear message. The jump in sales indicated that the brand’s solidarity with Kaepernick was seen as a positive move by the fans who expected no less from the sports giant.

Committing to a movement on social media and speaking up must be combined with taking action. In June 2020, LEGO removed all marketing activities for police-related products and pledged $4M in donations to “organisations dedicated to supporting black children and educating all children about racial equality”, arousing many positive reactions from users excited about this honorable decision. 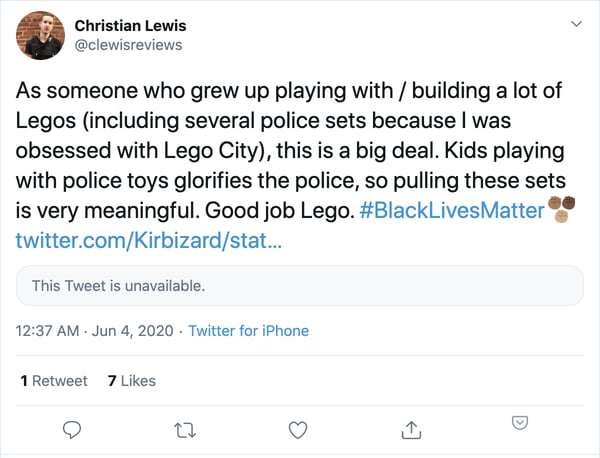 McDonald’s, as well, donated $1M to The National Association for the Advancement of Colored People. Unless the messaging of support is backed by meaningful action, the backlash from consumers is highly likely. To avoid this, brands should display a long term commitment to a social/environmental movement. This is the only way their intentions might appear sufficiently authentic to social media users craving for some real stances from their favourite brands.

Who is considered authentic (and more engaging) when it comes to activism?

The analysis of the Black Lives Matter conversation in French revealed interesting findings when it comes to engagement and positive reaction generation. Since George Floyd’s death, more than 50K posts relating to #BLM appeared on the French social media, generating almost 15M engagement actions such as Like, share, RT or comment.

Clearly, the 18-24yo segment proves to be the most active on this topic. If we examine the segment further, start seeing interesting differences between users of specific demographics.

If the conversation seems to be shared on an almost 50/50 basis by both 18-24yo male and female users, their posts do not receive the same treatment when it comes to engagement.

18-24yo female users’ posts engage significantly more people, with a 83,8% share of the 418k recorded engagement actions for this segment.

So, where do we go from here? As shown by those results, the reception of a campaign relies on who will drive those campaigns. Minorities speak out and their voice is heard, partially due to the messaging interpreted by social media users who genuinely care about an issue. As highlighted by us previously, consumers will no longer accept fake commitments and brands actions must be visible, transparent and relatable.

Engagement is driven by trust and authenticity

Although more brands decide to follow the footsteps of Lego or Nike, and use their presence as a platform to encourage change - many still struggle with appropriate reaction. The key challenge is to ensure the involvement goes beyond the initial PR moment and opportunity. Following the talk with actions that are genuine, meaningful and impactful is of paramount importance.

On the social engagement side, listening to the communities directly affected, understanding context and leveraging knowledge of experts (community leaders) give brands the opportunity to truly educate themselves and assess the position they should take. The identification of individuals and demographics that resonate particularly well with the rest of the audience is the first step to authentic and relatable content, driven by what consumers want to read, not messages agreed at the board level. The real investment in social movements such as Black Lives Matter, is a long-term strategy, based on a voice of users who really engage. When governments step back and fail those affected, global brands have a real role to play in the consumer’s eyes.