Camping in the UK: tradition vs trend 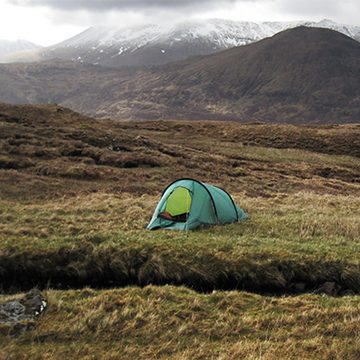 Despite the unpredictable weather, camping in the UK persists to be ever popular! In fact, the Great Britain Tourism Survey reported that by this time last year, five million camping and caravanning trips had been taken.

However, camping is not just a British hobby - it is a global phenomenon, and social data supports this. Across June, July and August this year, almost one million camping posts were published on Instagram.

Who is discussing camping online?

[Key interests of campers on social media: entertainment and technology]

These demographic insights indicate that while camping is conventionally a family activity, it is particularly enjoyed and discussed by millennials.

Food and drink are mentioned in 9% of posts, with campers showcasing a variety of creative recipes. A trend that enticed the likes of BBC good food.

Everything you need to keep the kids happy this summer, from ice lollies to camping recipes: https://t.co/PMFanMtXPW pic.twitter.com/Jvw8osILNc

But forget lunch dates, elevensies, and quirky brunches, for the majority of campers, breakfast really is the most important meal of the day. 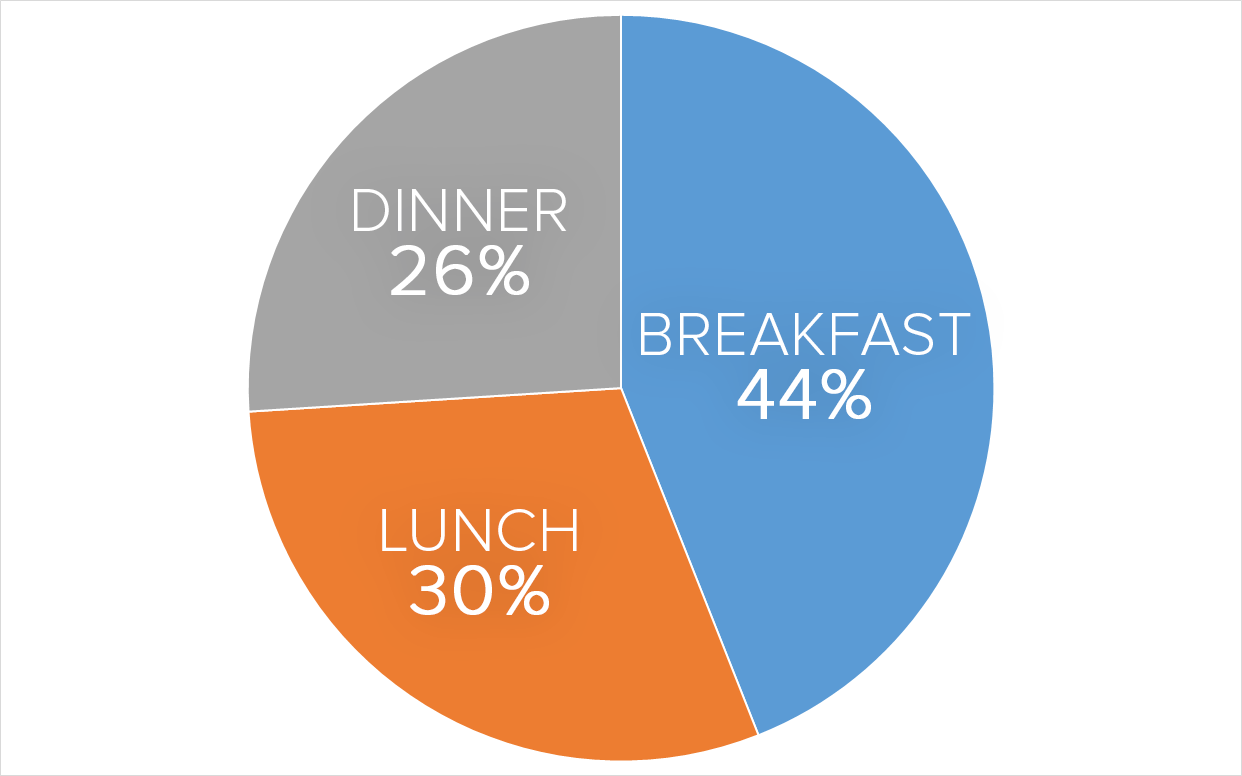 [Share of voice based on UK social media posts]

Yoghurt, fruit and muesli are mentioned in conversation, however focus is on the hearty and traditional English breakfast. Bacon and eggs conquer the healthy breakfast option, almost doubling the number of mentions.

Picnics are popular for lunch and an evening BBQ is the choice for dinner.

Traditionally nothing compliments a BBQ better than a beer. Beer is the most mentioned beverage in camper conversation, and even features as the fifth most used emoticon. 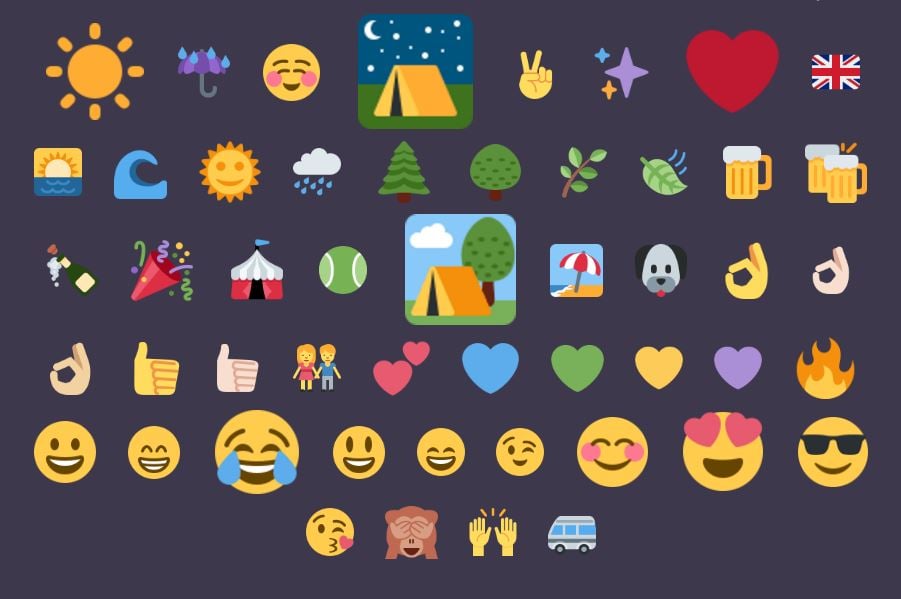 This demonstrates the pre-existing strong link, some would say emotional, between beer and consumers. Brands have already explored how to play with this... 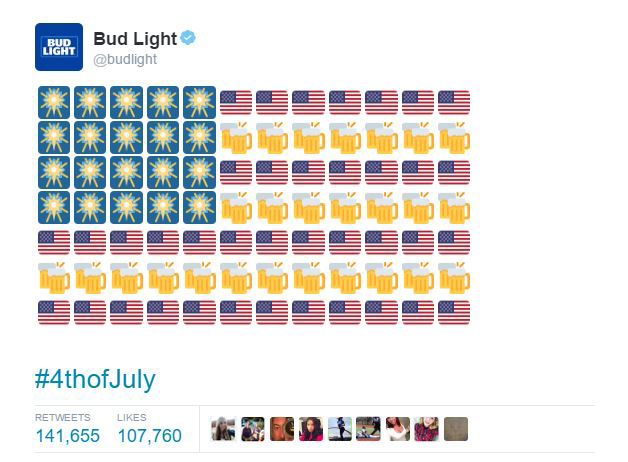 In fact, Corona Extra launched an emoji campaign this summer, #RaiseSummer. A campaign that was informed by identifying their target audience through the use of particular emoticons.

Although beer is a key topic of discussion, no particular brand has prevailed. There’s certainly a gap in the market for a brand to become the campers’ choice and set the tradition!

The prime camping hotspot in the UK is Scotland, particularly for males under 34, seeking adventure. Fort William is the most instagrammable location, with views from Ben Nevis making up half of these posts. 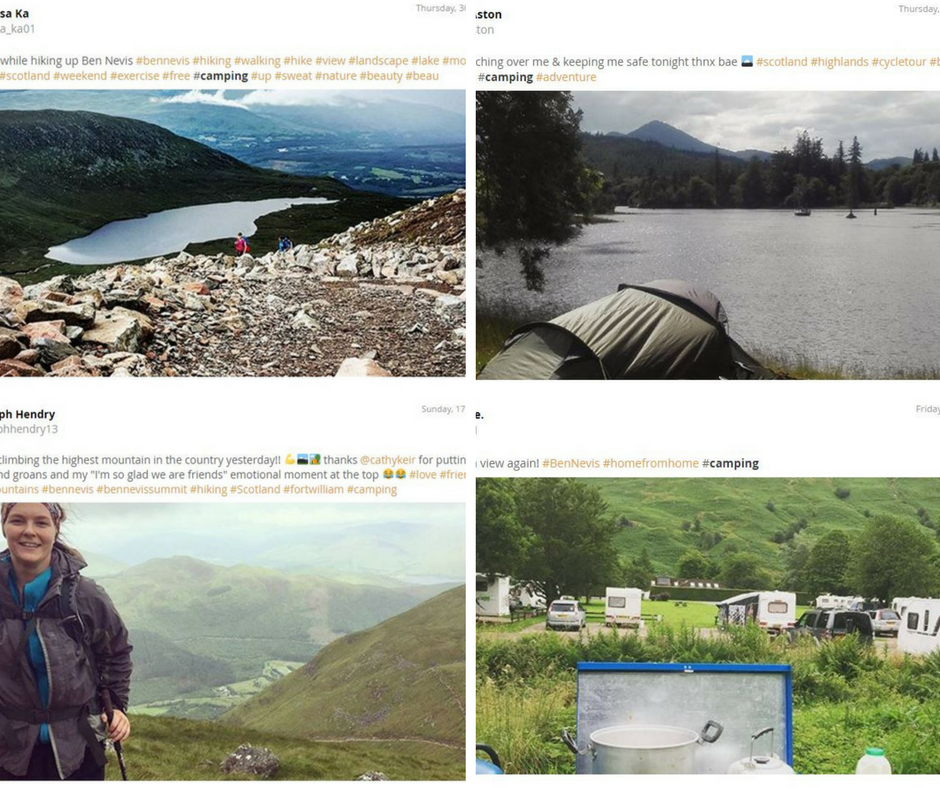 The old-school outdoorsy nature of UK campers is evident, as Snowdonia, Wales, is the third most talked about destination. Cornwall closely follows, due to its beautiful coastline.

Music festivals drive 14% of UK camping discussion. While heading to a festival is the top activity - a trend that has been catalysed by millennials - the most discussed festival in relation to camping is Glastonbury. 30 festivals, 43 years: Glastonbury is one of the longest-running mainstream music festivals of today.

In fact, Glastonbury is the second most discussed camping location after Scotland. The blend of mud, music and rain entices bigger crowds each year.

Glamping - camping without compromising on comfort, has been a phenomenon of the last five years.

“Glamping is likely to satisfy any city slicker seeking a little refuge in nature – without foregoing any of life’s luxuries”.

Its essence of luxury is what sets glamping aside from camping. But how does this trend sit against the more traditional approach to camping? 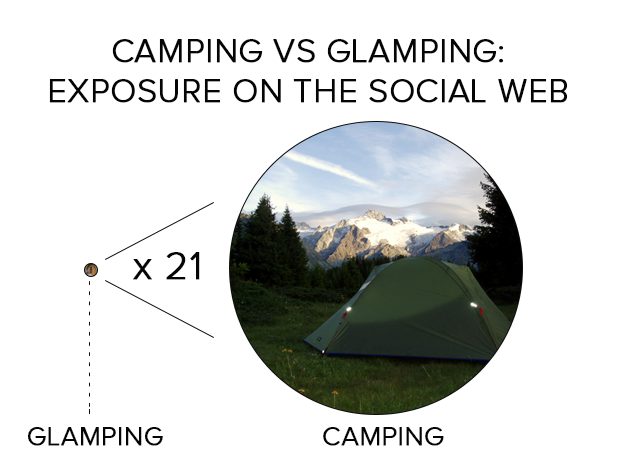 The glamping trend is not yet surpassing the popularity of camping, but it has had a positive impact in the UK.

The three main causes of upset for ordinary campers are the weather, lack of sleep and illness. All of which can be counteracted by a variety of glamping put-you-ups. Whereas, the primary source of upset for users interested in glamping is not being able to take such trips, #fomo.

Radarly proves that the identified complaints are core to the camping experience. Such instances are embraced more than they are condemned.

Camping in Britain wouldn't be complete without a thunderstorm! ?☔ #camping #britishweather

Millennial trends are breaking into everyday culture in the UK, especially with the rapid growth of organisations such as Uber and Airbnb, and the abundance of lifestyle coaches influencing the nation.

However, camping - which has seen attempts of 'millenialisation', e.g. glamping, remains ever popular in the UK because of the rich traditional experience it offers.

Social data paints a picture of the typical UK camper, millennial or not. Equipped with a tent, beer, bacon and a sense of adventure!

To find out about our social media intelligence services or if you would like to discover more travel/camping social insights then please get in touch or request a Radarly demo!