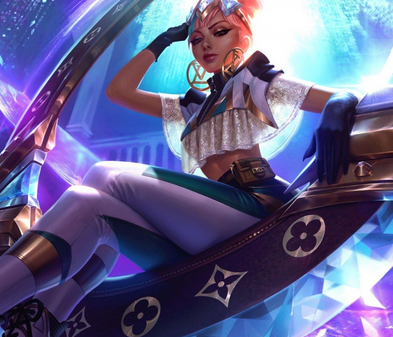 Social distancing doesn’t mean we are not allowed to have fun. If cinemas, theaters, concert halls and sports arenas are shut, what are the options left? When experiences in the real world are no longer available, virtual reality becomes an attractive alternative.Travis Scott’s and Fortnite’s digital concert proves this assumption. 27.7 million unique visitors attended it live, and its Youtube recording was viewed more than 48M times. Are those millions of viewers exclusively hard-core gamers? Right now, and beyond the current situation, consumers are eager to experience their world online. Casual gaming as a trend has been steadily growing and the coronavirus outbreak accelerated the rise. With $9.6B invested in video games development during the last two years, the online world is getting closer and closer to the real one, offering opportunities for brands that might have thought video games were for nerds only.

In our last webinar dedicated to Gaming and Toys industries under lockdown, we’ve learnt a lot on what makes video games so attractive to socially distanced consumers. Some brands have already capitalised on the engagement the genre is capable of generating. Their lead should certainly be followed.

The Nike sneakers Travis Scott’s avatar wore at the now famous concert became the centre of attention for the sneakerheads in the real world. The pair of trainers sells for more than $1,300 today.

Entertainment, gaming in particular, has long reached the fields of luxury, FMCG, sports and fashion industries. From last November’s highly discussed Louis Vuitton X League Of Legends collaboration, to Gucci t-shirts designed by Animal Crossing players, video games have proven to be a creative digital practice to endorse a brand and convey its image.

The audience and opportunities are significant and scalable, and there is nothing preventing brands from showcasing their products or jumping onto collaborations like the previously mentioned LV X LOL. Leveraging the multiverse introduced by those virtual phenomena is a sign of innovation and creativity consumers seek. For a long time television was the most impactful medium, with brands paying a high price to get their products featured there. Why wouldn’t they want to do the same in the new virtual reality appealing to an increasing number of consumers?
There are watch outs to take into consideration. Anything that is simply an advertising exercise will most certainly be interpreted as invasive by the players. There are alternatives available. Providing new, full-filling experiences, enabling change or providing support, sending a message that is relevant and timely - all these, if executed tactfully, are likely to strengthen a brand's perception and its relationship with the audience.

When Virtual Replaces The Reality

Nintendo has sold more than 55M units of Switch & Switch Lite by the end of March, recording a 24% increase this fiscal year. Are all of those new Switch addicts looking for a way to explore a new reality such as Princess Zelda’s Hyrule from Breath of the Wild? Hardly. Whilst exploring and getting away from boredom might be the purpose behind the purchase of a video games device, it is not the only benefit for the quarantined consumers.
Indeed, apart from exploring, people search for ways to escape their current living conditions. Animal’s Crossing: New Horizon’s huge success (15.5M discussions worldwide in 2 months) definitely shows us what casual gamers are experiencing when stepping in a new virtual world.

Particularly in lockdown, Animal Crossing offers an escape to those who want to forget the reality and immerse themselves in a dimension that is similar yet much better and more peaceful.

More importantly, the mechanism of the game embraced two core elements that inevitably led to the game’s huge success: social interactions and creativity.

Hanging out with friends in real life is at best challenging and for most of us still impossible. As such, consumers are eager to share their Animal Crossing moments with friends. Social media platforms are flooded with screenshots of in-game birthday parties, picnics, spider-hunting missions and even graduation ceremonies. Moments shared in a virtual world that imitates real-life experiences is invaluable for consumers today.

The crafting system in Animal Crossing is another gem of the game. Web users discuss and share how they decorate homes and design their own furniture. They share codes of their paintings and clothes designs so that others can use them in their games. Crossovers are spotted everywhere, as creative players implement elements from another game/anime they love into Animal Crossing.

Fashion, typically an exclusive sphere, is compensating for the cancellation of Fashion weeks and catwalks. Virtual runways with Djs and celebs sitting in the front row, as in the real world has been a welcome solution.


Problem is - when you spend 10 hours in a row wandering around your favourite video game, how are you supposed to burn all the calories accumulated from your last banana bread? Well, it seems like video games also got this area covered.

Those who assume that playing video games only consists of holding a controller, might have been sleeping for the last 15 years. Since Nintendo’s Wii, every video game studio has developed games that are actually meant to be played by moving around.
As the home workout becomes part of the new normal, video games can definitely cope with consumer’s growing expectations around self improvement and wellness.


Time to mention another great initiative from Nintendo. To satisfy the growing demand for home workouts, the brand released Ring Fit Adventure. When people are challenged with limited space and increased food temptations, this new controlling device allows players to get a professional training, without leaving their living room. Interestingly, while both Chinese and Western consumers talk about their ambitions to keep fit with the Ring Fit Adventure, the former often mention how much they regret not buying the game set before the quarantine. 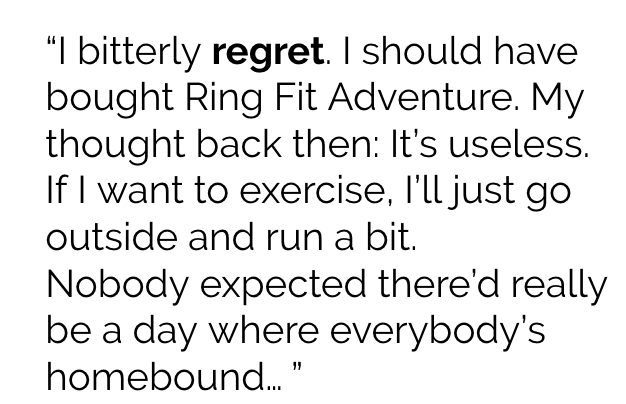 Undoubtedly, now that consumers can run their daily workout routine without necessarily going to the gym, they might cut off their gym subscription to save money and buy a Switch, opening a new space for brands to pre-empt the need.

Virtual is becoming real- are you there?

To summarize a little bit, let’s make things clear: the goal of this blogpost was not to have you buy a Switch! What I really wanted to highlight is that online gaming has been one of the winning industries in the lockdown context, and that the behaviours recorded on the social web, are here to stay.

Indeed, the physical constraints imposed by the quarantine have made consumers look for new ways to escape, connect and create. Casual gaming attracts players across the spectrum, making the gaming industry more inclusive. Even the traditionally closed platforms like Twitch are changing. The “Just chatting” channel is the one that’s most attractive, with the number of viewers overtaking the more traditional channels around specific games.

Casual gamers are growing in numbers. If you want to have a look at our recommendations for brands looking to engage with them, it’s all recorded in our webinar dedicated to Entertainment. You will find on our Covid Resources Hub. Enjoy the show!