Learning from China's Covid- It's not all revenge spending

Over the course of the three months from January to March, the forecasted GDP of the world’s second biggest economy shrunk from a roughly 1 trillion to 350 billion US dollars, destroying value equal to the economy of Switzerland in the biggest economic downturn since the cultural revolution.

Eyes at every global brand are scrutinizing China’s recovery from the initial impact of COVID-19, hoping spending will return to pre-COVID levels, and fearing a long-term downgrade in consumption. Fashion and luxury brands are especially attentive, since China contributes up to 50% of their global revenues. Some of these brands, unable to hold their breath long enough, have closed operations without plans to re-open.

Two camps of forecasters have coalesced to predict what will happen in China, and more importantly, whether or not this is indicative of what will happen in the west: those who believe consumers will rush back into stores and restaurants, eager to reignite their consumptive lifestyles, and those who see a more lasting cautiousness and a new normalcy of reduced consumerism.

The Revenge Spenders Will Save Us

“Revenge spending” describes the behavior of consumers emerging from isolation to spend more than they routinely spent before the pandemic, perhaps driven from the resentment of being forced to eat their own cooking or wearing clothing from last season. In the past 6 months, the term “revenge spending” (复性消费) was mentioned over 3.5 million times. To give some context, this is almost as much as discussions of the previously upcoming 2020 Summer Olympics.

In a perfect example of the sensation, a café in Qingdao launched a gallon-bucket-sized bubble tea, priced at 14 USD, or eight times the price of the standard serving. Consumers flocked to this and similar promotions, claiming a need to “catch up” for weeks of missed bubble tea. 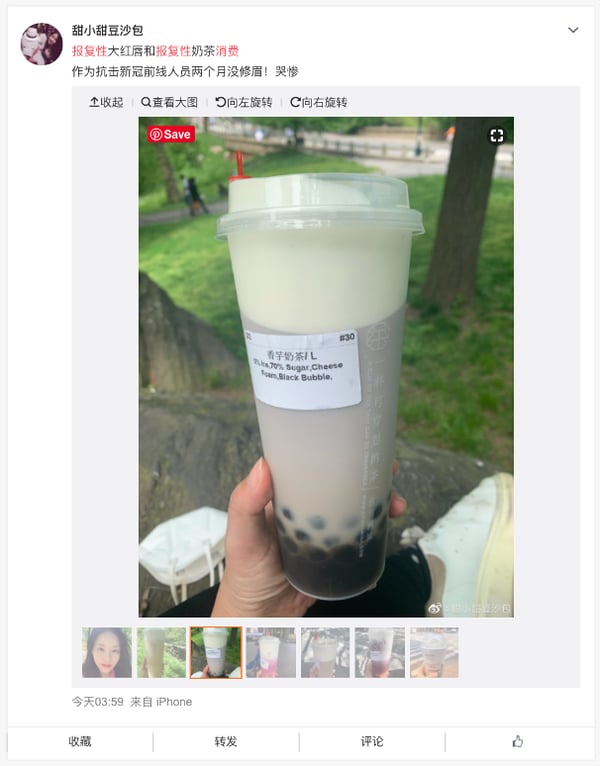 One Weibo netizen laments about missing bubble tea for two months, and catches up.

Consumer brands have also been quick to take advantage of the sudden increase in middle class spend, with McDonalds being the most visible brand in posts mentioning “revenge spending”, followed by CPG brands belonging to Mondelez, PepsiCo, and Danone. 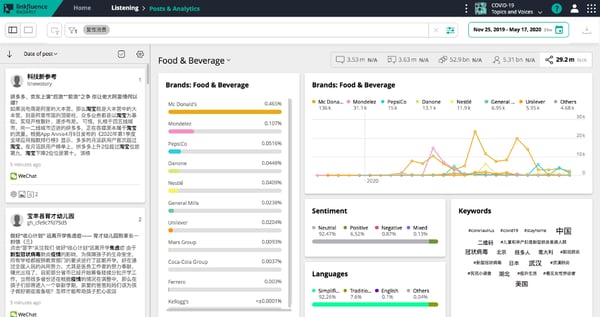 While brands realize that revenge spending will end, the trend indicates that many consumers will return to their previous habits of consumption across categories and that the lockdown will not in fact have a longer-term depressive impact on the economy or shopping trends.

A Consumption Downgrade is Inevitable

Chinese born after 1990 haven’t lived through the cultural revolution or great leap forward, but they’re still subject to the advice of their parents who did, and are still immersed in China’s culture of value and proclivity for saving. China’s gross national savings is nearly 50% of its GDP, compared to a rate of 17% in the US, indicating a deeper cautiousness engrained in society.

‘Consumption downgrade’ (消费降级) refers to a growing caution among Chinese middle class consumers, which first appeared in response to a simultaneously slowing economy and increasing spending on overpriced Starbucks lattes and luxury handbags.

The COVID-19 pandemic has caused a resurgence of the term in social media, as a response to uncertainty both in China and economies abroad, which impact the prices of important goods like soybeans, evidence of this can be seen in the trend of posting lists of items being downgraded. 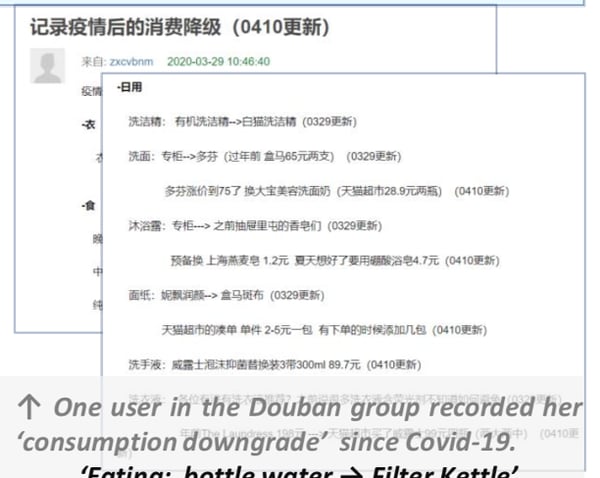 One Douban user listed items she had downgraded, mentioning brands like Dove and Walch.

The Truth is Somewhere in the Middle

People say it takes thirty days to form a habit, which makes sense and is an easy rule of thumb to remember . Unfortunately, however, it’s incorrect. On average, it actually takes about 66 days to form some habits, and for other more that 200 days. After that time, even if the circumstances that caused the change return to normal, the habit often remains.

While no-one can forecast which consumer habits will persist after the pandemic is over, social intelligence gives us the ability to predict the near future and plan three to six months out, an approach economists call nowcasting.

By tracking how terms like “revenge spending” and “consumption downgrade” are trending across industries, for example in luxury fashion as compared to quick-serve restaurants, and comparing these trends to current sales, brands can have a strong indicative measure of what’s to come.