The Chinese social media landscape, how big is it really?

Between January 2016 and January 2017, the number of active social media users in China increased by 20%. With over half the population owning a social media account, the Chinese market should be core to the social media marketing strategies of all global brands.

In addition to greater social network adoption, China has seen a move to mobile with a 39% rise in mobile web traffic in the last 12 months.

How can brands make the most of the Chinese social media? 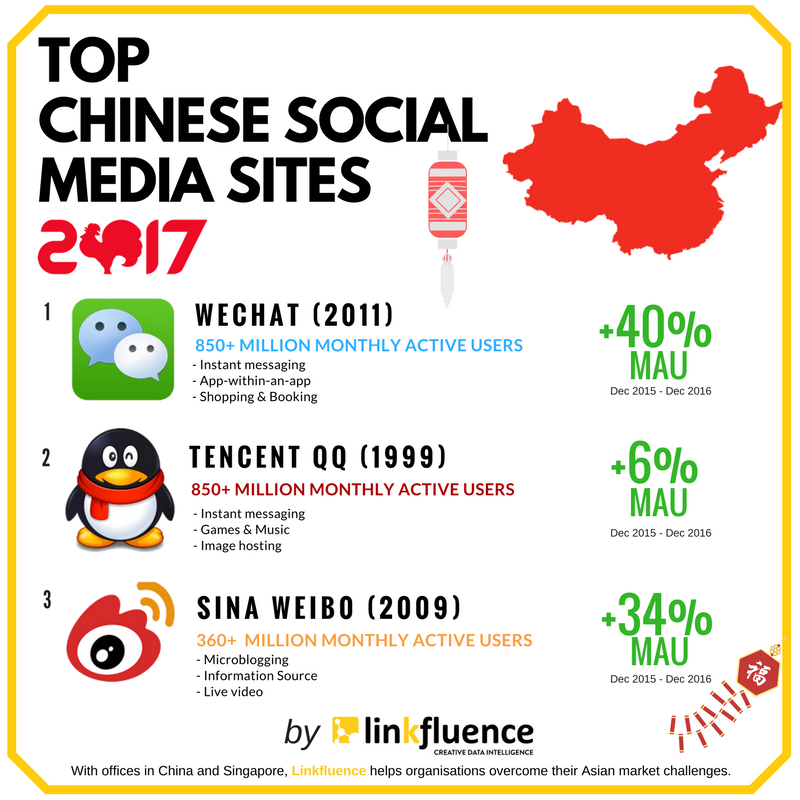 WeChat can be likened to a combination of:

It has surpassed simple communication functions to become a sophisticated e-Commerce platform... Book a flight, reserve a table, make a payment - it’s a one-stop shop, all from your smartphone.

Luxury brands #win at WeChat. According to Bain & Company’s 2016 survey, 60% of Chinese consumers identified WeChat and Weibo as their go-to online resource for luxury goods.

To increase brand exposure in China, British born Burberry signed up to WeChat in 2013. For nearly four years, Burberry has utilized WeChat’s many functionalities to build strong relationships with its consumers.

In light of the Chinese New Year in 2016, Burberry created an app-within-an-app. Followers were sent a virtual gift that led to many opportunities: the ability to send personalized greetings, to browse and buy from Burberry’s exclusive collection and to win a limited-edition Burberry Lunar New Year envelope. As the envelope was only available in-store, the campaign drove footfall and in-store purchases.

“The Chinese social media landscape is the most dynamic, unique and influent in the world”

Chinese platforms, like WeChat, are multi-purposeful in order to meet the demand of the Chinese internet community. An approach that Facebook has begun to embrace, although other Western platforms remain focused on their core functionality.

Tencent drives the growth of QQ and WeChat.

QQ has been referred to as a ‘clone of ICQ’ with a Facebook-like style. It’s most popularly known for its instant messaging service, but also offers online gaming, music, shopping and microblogging functions.

Tencent QQ is particularly effective for institutions and niche brands. QQ groups can be created to interact with group members to build relationships. The creation of a group also means a brand can build a community around its product or services. Furthermore, brands can benefit from Qzone marketing. In just three days, Oreo’s ‘Zone of Child Innocence’ Qzone campaign triggered 130 million impressions. The combined reach of QQ and Qzone is unparalleled in China.

Step 3: Win at Sina Weibo, the Bounce Back King

Sina Weibo’s growth figures almost rival those of WeChat. The platform drove a 34% increase in monthly active users between December 2015 and December 2016. An unpredicted trend, since media outlets such as the BBC, projected the death of Weibo in 2015.

2016 saw a rapid turnaround thanks to a host of new partnerships and feature integrations. Sina Weibo is now supported by the entire Alibaba ecosystem which enables the platform to fuse with Tmall, Youku, and live streaming apps such as Yi Zhoo.

At first, Sina Weibo was dubbed the (bigger and better) Twitter of China, however, it is now more commonly compared to Facebook. While it exercises Twitter’s key traits: @’s and #’s, it is likened to Facebook due to its many other capabilities. Weibo’s functionalities go beyond blogging. Weibo is also used to share music and videos, create photo albums and play games. Users are able to personalize profiles too.

In 2016, parallel to Facebook, Weibo saw a big rise in live video. The platform delivers 470 million daily video views. In China, live-streaming has become the video equivalent of the selfie.

Weibo is a powerful and productive platform for B2C brands. The Beauty and Sports industries have successfully invested in the platform to expand their reach in China. Following a recent live-streaming deal with the NFL, Zhang Zhe, head of Sina Weibo Sports, said:

“We strongly believe that social media is a core platform to promote and consume domestic and international sports events.”

Weibo offers an opportunity to businesses unknown in China. Chinese consumers are somewhat different to Westerners, the “just Google it” concept is completely alien. Consumers will typically browse Weibo to discover new brands rather than using search engines.

Chinese consumers admire brands that share their heritage, their values, and their story. A brand that does this particularly well is French luxury brand, Chanel. However, not all companies are able to compete with the awe around luxury brands in China and must approach the challenge of the Chinese consumer in a different way.

Chinese social media users thrive off personal interactions and favor brands based on their social persona. Brands that humanize their language and move away from corporate speak drive more engagement. It’s not just the voice of the brand that needs to be mastered, it is important to ensure content is fresh, interesting and relevant. Chinese consumers also respond poorly to content that oozes a desperate craving to go viral.

“The effective path to building quality, local content and creating impact lies with a launch-listen-learn-respond approach.”

At Linkfluence, we have unparalleled technology that allows our clients to listen to and analyze the Chinese Social Web. What’s more, we have a team of local insights experts to support our clients’ social and digital strategy in APAC. If you would like to discuss your Asian market challenges and how Linkfluence’s social media intelligence solutions can help, please get in touch!

Tip: To gather rich data regarding your targeted marketing efforts we also recommend checking out the Meltwater social marketing platform!