A great example is our recent post on Coca Cola’s latest strategic innovation: artificial intelligence. By adopting advanced learning software into their drinks machines; real-time collection and analysis of consumer data is able to identify trends and opportunities in various regions. It also means new and bizarre flavors (cinnamon and spiced cranberry) can be trialed with more accurate results.

But in a broader view of the B2C industry, there's an abundant source of real-time data that many companies continue to overlook, and this of course is social insights. There’s no more immediate source of consumer insights than in social media.

To demonstrate the different ways you can leverage social data, our social data analysts created a report using Coca Cola as an example. We took a quick look at their social insights in the United Kingdom across the web in the first quarter of 2019.
Ready? let's dive in.


From social data to consumer insights

In the first three months of 2019, Coca Cola generated 22.8K mentions across major social platforms of which 72 percent came from Twitter. It was yet again, the main platform used to discuss the Coca Cola brand and was driven by user-generated content. Consumers shared their favorite flavors, discussed environmental issues and the sugar tax. The top user-generated post by engagement was on Instagram and received 13.2K likes. But how can this data be translated into actionable insights?
Let's break it down.

What's the size of conversation around your brand or campaign? Volume is a good indicator, it shows you what audiences find interesting and helps to identify what your consumers are loving or hating. By analyzing the volume of conversation, we're able to identify the most popular moments of consumption among Coca Cola consumers.

Coca Cola paired with food was a popular topic and made up 52 percent of all conversations. It was the beverage of choice, consumed with fast food such as McDonald's, home-cooked roast dinners and lunchtime meals, clearly indicating that a Coke beverage is popular at almost any time of day or with any meal.

Moviegoers made up just 5 percent of the conversation, pairing their favorite Coke with either popcorn or nachos while watching a movie. Alternatively, people also enjoyed pairing their coke with alcohol.

So I learnt last night that pouring half a pint of vodka into my large Coke Zero at the cinema made things much more entertaining. Vodka cinemas are now the way forward 🍿🥃 pic.twitter.com/v4nnXoNYI4


Of the 11 percent of conversation volume around treats and snacks, health-conscious consumers participating in a healthy diet regime, enjoyed Diet Coke when craving a sweet treat.

Both Diet Coke and Coca Cola Zero were found to be prominent choices among both the online slimming community and calorie-conscious consumers. 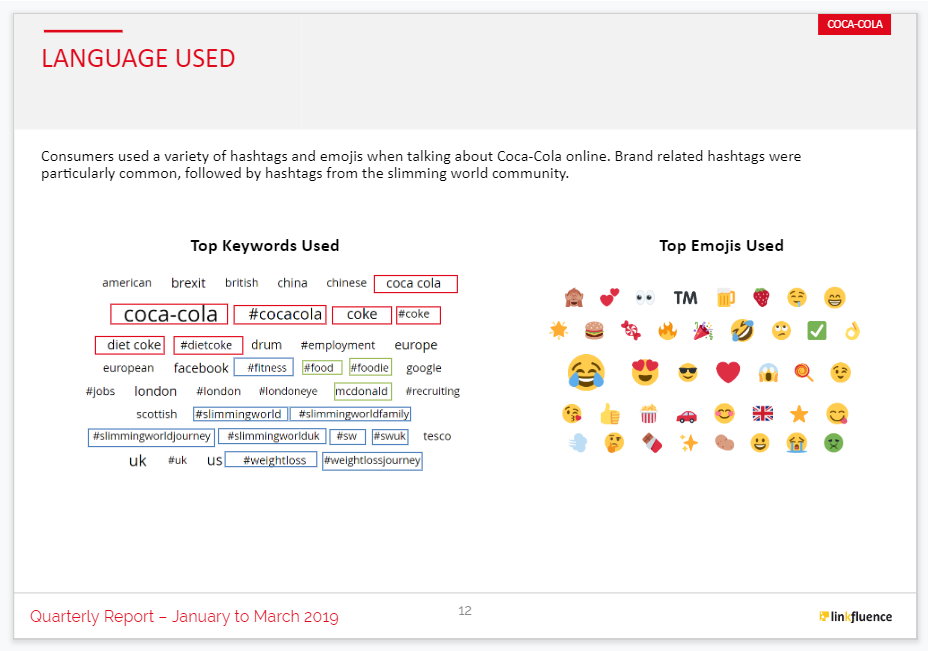 The beverage industry is currently reshaping itself by moving away from sugary carbonated products to low-calorie beverages. Using these insights, we can identify the scale of the trend, particular tribes behind it and the specific products they’re searching for.

Immersive brand events and experiences are used to increase awareness and engagement. It creates opportunities for a brand to physically interact with their audience, and encourage social engagement through unique hashtags, thereby increasing their share of voice online.

Another opportunity to drive online engagement is brand sponsorship. In February, Coca Cola kicked off a three and a half year partnership with the Premier League with an advert campaign, ‘Where Everyone Plays’. The Premier League has international coverage and was Coca Cola's main driver of conversation volume this quarter. 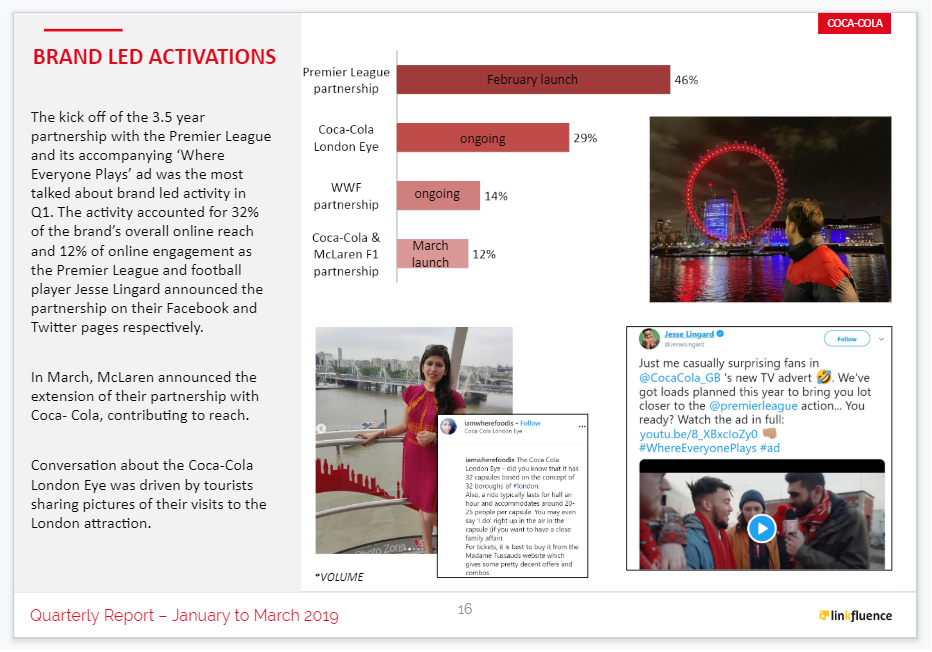 It was their most discussed sponsorship, accounting for 32 percent of the Coca Cola’s overall online engagement. How are people participating in the conversations around your brand?

Engagement helps to identify how audiences spread and engage with a topic. Football player Jesse Lingard announced the Premier League partnership on his Facebook and Twitter pages and in turn accounted for 12 percent of Coca Cola’s online engagement; a good way to identify the most influential sporting figures for a campaign.


In March, Formula 1 contender McLaren, announced an extension of their partnership with Coca Cola and was one of the activations contributing to their brand reach. This can help to estimate the number of users exposed to a social post, and how far your content is disseminating.

McLaren Racing and @CocaColaCo announce a 2019 Formula 1 partnership, following a successful 2018 pilot which saw the iconic Coca-Cola brand carried on a Formula 1 car for the first time. 🤝

And finally, 29 percent of conversation volume was driven by tourist photography of the Coca-Cola London Eye. The famous London attraction provides a continuous flow of social conversation all year round.

Among the Coca Cola topics discussed was the negative impacts of plastic on the environment; an ongoing and increasingly popular topic related to manufacturing methods of the beverage industry.

People took to Twitter to express their outrage over plastics polluting oceans, demanding the Coca-Cola brand take responsibility for their actions.

A small collection of plastic picked from @balmedie beach yesterday. No surprise to have a @CocaCola top. When will you @CocaCola_GB take responsibility for the pollution you create? #deadwhales #plasticpollution pic.twitter.com/jX7B8bB8ls


The conversation was further fueled by the revelation of how much plastic Coca-Cola produced in 2017. Some thought that sharing this information was a great first step, but many also demanded alternative actions to be taken to find a better solution. Some even signed a petition attempting to force Coca-Cola into implementing better environmentally conscious policies.

Hey @CocaCola great you have admitted it (first step) but what are you going to do about it (real step)? Coke uses 3 MILLION tonnes of plastic packaging in one year. Bravo @circulareconomy for creating pressure, data and mobilisation.


Sometimes the most important insights don’t come from your consumers. Tracking the negative sentiment around your brand can help you spot an emerging crisis in real-time, and respond immediately. Identifying the platform, topics, and concerns, allows you to set up alerts to be notified in the event of future crises.

This Coca Cola case study is just one example of our hybrid solution at Linkfluence. We combine human expertise with AI enriched social listening to help brands understand their audience, competitors and industry. Learning to surface and leverage social insights can provide deep and bountiful analysis to track trends, find new products, consumer tribes, influencers, crises and more, in every region of the globe.

If you’d like to have a conversation about social media intelligence and what it can do for your brand, get in touch! Or take a peek at our customer case studies page to see how we’ve helped other global brands.