COVID-19: Are #tipyourbartender Programs the Perfect Charity for Alcohol Brands? 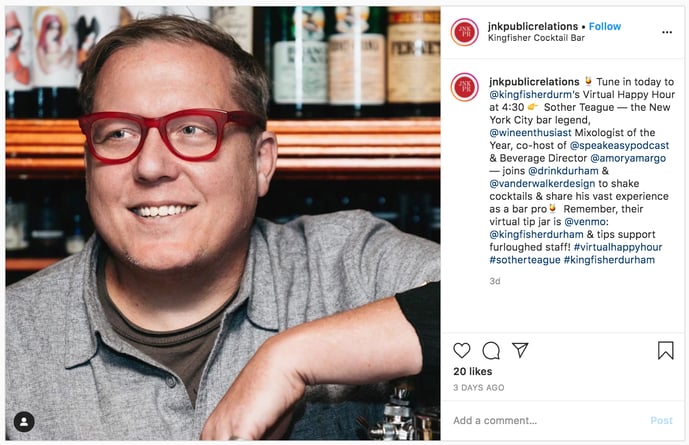 Not even a repeat of the 1920’s prohibition could be worse for bartenders than COVID-19. Not only have bartenders lost their jobs, but brands have lost the on-trade business associated with them, the cultural ambassadors to their customers, and the human face of the beverage industry.

A good bartender romanticizes the comfort or celebration of drinking. She narrates the heritage and craft of exclusive whiskeys, and elevates common well drinks into status symbols, seducing us to spend as much on a cocktail in a New York bar as a bottle of gin or vodka at a liquor store.

Despite their lynchpin role in the industry, bartenders are one of the most underpaid skilled workers. To address this issue, charities have been setup to provide the support many other workers take for granted, like the Helen David Relief Fund, designed to help bartenders diagnosed with breast cancer.

But to even slightly ameliorate the impact of COVID-19, these charities are not enough.

The Industry’s First Response has Been to Help, not to Entertain.

The impact of COVID19 on the industry is unprecedented. In response, alcbev companies have donated millions of dollars and produced oceans of hand sanitizer, and not only large companies like LVMH, Constellation Brands, Bacardi and Ab InBev, but at least 62 distilleries in the US alone, many of them independents.

For example Grey Goose not only shifted production to produce 7,600 gallons a day of hand sanitizer, but worked with a partner outside the industry, L'Oréal, to deliver 42,000 gallons of alcohol to L’Oréal to distribute sanitizers free of charge to hospitals, pharmacies, and care homes.

Another remarkable case comes from Another Round, Another Rally , a non-profit that raises emergency funds for hospitality workers to support bartenders who are facing economic hardship due to the COVID-19 emergency. Brands such as Campari, which has recently announced the donation of $1 million to the cause, are encouraging bar patrons to support their local bars by joining in the movement via the #AnotherRoundChallenge.

The United States Bartenders' Guild has, in a similar way, activated the Bartender Emergency Assistance Program. Dating from 2015, participants in BEAP include Pernod Ricard, Diageo, ABInBev, and other major holding companies.

The BEAP program was mentioned nearly 14,000 times, peaking in mid-March.

While some of this charity finds its way to assisting bartenders, it doesn’t bring us out of our homes and back to the bar. And as evidenced in the decline of the #quarantini social media trend, some of us are beginning to realize we’re not the talented home mixologists we thought we were.

Mentions of #quarantini, showing a peak in March and subsequent decline.

But in the medium-term, Entertainment is a Promise that Brands Need to Keep

At the same time, brands are considering how to align their charity with their heritage. As confinement continues indefinitely and brands begin to ever-so-carefully reintroduce advertising, most have resorted to PR textbooks on communicating during crisis, creating an echo chamber at best, and lack of sincerity at worst, as shown by this mashup of major brand television ads.

Creative agencies have found the magical mix of subtlety, purpose, and humor nearly impossible to script, leaving their clients with two options: either curating and re-playing our own stories, or speaking through the cultural ambassadors who’ve earned the right to laugh along with us.

Clever brands have responded by reincarnating the voice of the bartender via live happy hours and contests. Examples of this outside the US include ABInBev (through BarSolidaire) and Spirits Hunters through their own contest.

Unlike #quarantini and mentions of charity, #virtualtipjar conversation have more staying power.

Jameson, who’s charity created $1.3 million in donations through partnering with Republic National Distributing Co, and matching donations from consumers, has gone further to re-activate bartenders via @Jamesonhosts in an effort to both support bartenders and reactive them in their classic role as brand ambassadors.

In one of the best examples of reactivating the role of bartenders, the online magazine Punch setup a daily happy hour which allows those of us who desperately miss our after work watering-hole to maintain our relationship with the bar while improving our mixing skills.

Punch connects their audience with bartenders to create virtual bars and tipping.

Grey Goose's House Pour may be the most extensive of support-your-bartender programs, which hires out-of-work bartenders to create video cocktail lessons. Airing on the brand’s social channels, the videos connect bartenders and drinkers worldwide to share stories and favorite drinks. Videos include a link to donate to the United States Bartender Guild, Tales of the Cocktail Foundation, or Another Round Another Rally.

In Crisis, Alcohol Brands are Speaking Through an Important Tribe - Bartenders

Bars, bartenders, and the rest of us have no idea when drinking will go back to normal. And as brands face uncertainly about what that “normal” will be, social media has become one of the only remaining ways to understand how people are adapting.

Consequently, bartenders’ activity on social media has become channel for finding an authentic voice, while simultaneously supporting the people that have for so long been compensated mostly by the recognition of their customers. Re-creating that bond is the most effective way to stay relevant.