Influencers, robots and the death of Snapchat: Social insights from the Festival of Marketing 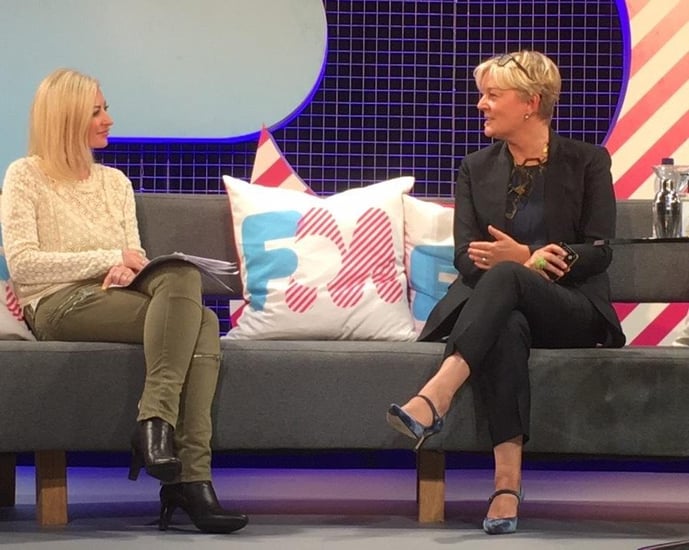 Big Data, customer experience, disruption, transformation; these are the topics you’d expect to see discussed at a big marketing event. And they were certainly on offer as part of the hundreds of presentations and workshops at this year’s Festival of Marketing, held at Tobacco Dock, London, on 4 and 5 October.

Yet the buzz that pulsed throughout the “festival city” this year firmly pointed to artificial intelligence and the influencer bubble as the big topics for marketers right now. Oh - and one man.

Stephen Fry is the reason many of a certain age joined Twitter all those years ago, so there was more than a little excitement as the man himself walked into the room for the headline keynote at this year’s Festival of Marketing. Resplendent in jacket and tie, he waxed lyrical not just about his history with the platform, but also his excitement around the coming robot revolution.

And there march the robots once more. Over and over we were assured the robots were not coming to take our jobs; told that AI needed our emotions put into it to take it beyond menial tasks; that, in the words of Mr Fry himself, we are facing the biggest change for humanity since the agricultural and industrial revolutions.

What got us talking at this year's Festival of Marketing?

You’ll find plenty of articles online poring over the AI discussions, and what the future holds - to quote Mr Fry quoting Wayne Gretzky, “smart marketers are where the puck is going to be” - so let’s take a moment to focus on the here and now. Jo Malone, Mark Ritson and Suki Thompson got people talking, and everyone wanted to be a growth-hacker, an entrepreneur or leading a start-up. What did we learn at the Festival of Marketing that you can take back to the office and start working on today?

1. It’s not just about millennials

So much of marketing discourse urges we be mindful of millennials - closing out the first day, Jo Malone said: “I understand that the young generation wants to create. Treat me as an equal, teach me, they say” - but one of the more powerful presentations told us we shouldn’t forget the baby boomers. There is £173 billion in spending power collectively between the UK’s over-50s, yet baby boomers feel under-represented and forgotten about in today’s marketing.

The compelling “Grandmother Pukka” - Lucia Whitehouse, the self-proclaimed “instagran of Instagram”, a prolific Instagrammer and an over-50s influencer - pondered why the representation of the over-50s centres around “old people stuff”, like gardening or stair lifts. Research by Gransnet found L’Oreal, Dove and Marks & Spencer are among the best at representing the older generation; Boden has just approached Grandmother Pukka to be a new face for the brand.

But Jane Stocks of BMI Healthcare did give a word of caution for those thinking of targeting baby boomers: this is not one homogenous group. They know what they want, and are not easily influenced. If a baby boomer follows you on social, you have to work hard to keep them. She advised you be there at the point of need, be discoverable, but avoid the hard sell - baby boomers hate to be patronised.

Should we be making things ‘simpler’ or...did they invent the internet and smartphone and we marketers need to WAKE UP?!#festivalofmarketing pic.twitter.com/1Ddg7K5aYq

At least two social experts - including from marketers-of-the-moment Social Chain - warned the much-hyped Snapchat is on its way out. A big indicator they’re right? Our platform didn’t pick up a single use of the term “Snapchat” throughout the festival, its lead-up, or its aftermath. In contrast, mentions of Twitter hit 252k impressions, Instagram achieved 5.56k impressions, there were impressions of 9.78k for Facebook, and LinkedIn reached 156k impressions.

In June 2017 Social Chain wrote that Generation Z would save the dying Snapchat; on Wednesday, CEO Steve Bartlett told the first session at the Festival of Marketing that it “will go away soon”. It was a running theme in discussions about social platforms, with Come Round’s Philip Brown predicting Instagram and YouTube will be king in 2018.

3. Fake influencers can be discovered

Philip Brown welcomed us to the “influencer marketing sh** show” on day two, coming after many, many, many talks the previous day and a half about influencers and how to best engage them. Influencers and celebrity endorsers - such as Laila Loves, Tom Daley, Rochelle Humes, Jamie Jewitt, Lauren Laverne, Reggie Yates, Anna Whitehouse and Ella Mills - were everywhere at this year’s festival; it was Brown that tackled the big question of spotting a fake influencer.

The simple answer? Check, check and check again. If you’re thinking of engaging an influencer to help your brand reach, make sure you do your due diligence because fake influencers abound. He shared a four-step solution:

Also look at the reach of their posts, the engagement, the history of their followers. And, essentially, the location of their followers; would a micro-influencer in Vienna have the majority of followers in places like Brazil, Mexico and Russia?

There was a resounding message coming from all the influencers at the festival: you need to involve them in the creation. Let the influencers create the content, and the brand deliver the reach - and definitely don’t try to write their posts for them.

Influencers shouldn’t be a last-minute addition to any strategy. In an inspiring opening session on day 2 where he sat alongside Reggie Yates and Rochelle Humes, Olympic diver Tom Daley made his preferences clear - he wants to be involved in the creation and said brands should trust the influencer knows what works for their audience. That session, incidentally, sparked huge social conversations; impressions of 296k and reach of 23.7k in just one hour. Reggie Yates’s impassioned views on diversity were still being discussed well into the day.

Yates’s plea for authenticity was another talking point, and something many other speakers echoed throughout the two days. Whether you’re working with influencers or creating branded content, fakers will be quickly discovered and your audience won’t engage.

Leon Harlow of influencer agency James Grant Group urged brands to think of the value for influencer talent beyond an exchange of money; teaming up with a brand could expose them to new markets, new skills, new viewpoints. He used the example of footballer Frank Lampard, who is a Weibo ambassador in China - a role he accepted to spread his brand into the hard-to-reach market.

Interestingly, only one session actually focussed on the lessons to learn from what’s happening in the East. Our very own Benjamin Duvall stunned his crowd with tales from China, telling us that China is ahead of the US in a lot of digital engagement and consumption. (Incidentally, you can download Ben’s deck here.) Perhaps Asia will be the buzz next year?

Regardless of role or marketing practice, every session touched upon social in some way. It’s clear that social intelligence and insights are invaluable to brands large and small as they seek to build their audience and develop their strategy.

China is ahead of the US in a lot of digital engagement and consumption, says @benjaminduvall #FoM17 pic.twitter.com/4EojLAyIEu

Want to improve your own social insights? Get in touch with the Linkfluence team.