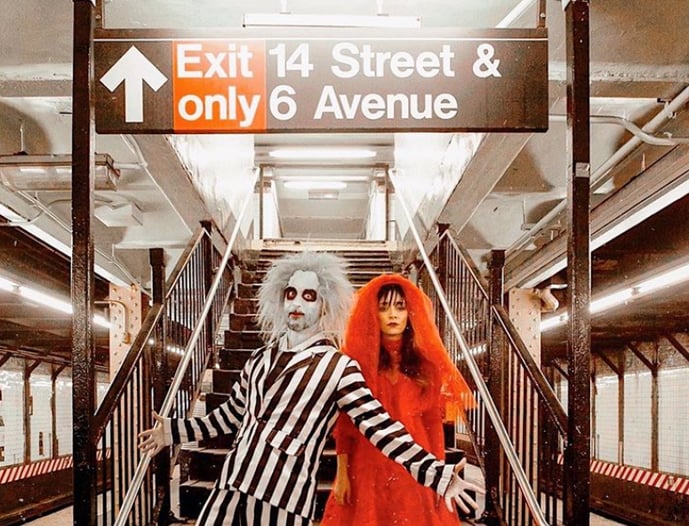 Every October, brands and fans begin their annual Halloween discussions online. Last year, we saw online holiday chatter literally double on October 1st and this year was no different. Let’s take a look at the content driving Halloween conversations each year, and check out one brand that's taking 2019 trends to a “horrifying” place.

A traditional costume search, yielded modern versions of decade old classics including witches, pumpkins, and an assortment of animals.

Scattered amongst top-performing content, were cost effective designs and signs that sustainability is driving the traditional costume category.  Millennials and GenZers in the 18-24 age range, sought sustainable, affordable costume options and contributed to nearly half of the discussion about eco-friendly costume options so far this year. 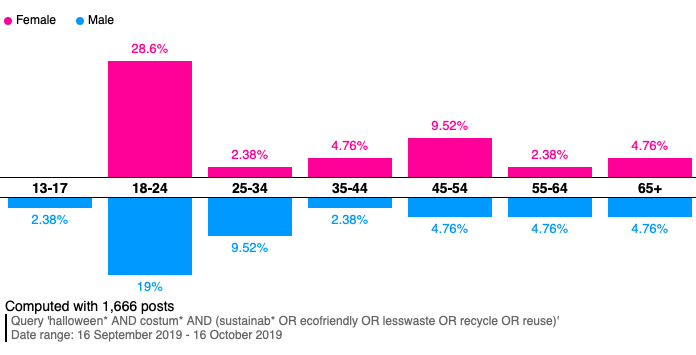 It’s safe to say, a traditional Halloween costume can be a winner for you in 2019. When picking a “traditional” costume, many are reminding friends to consider the origins of each costume to avoid cultural appropriation.

Halloween is coming up. Have you or your kids ever worn a marginalized person’s identity or culture as a costume? . . “If you missed the mark when you were younger, maybe think about using this Halloween as an opportunity to teach your kids about the importance of cultural sensitivity. If your child’s dream costume feels questionable, don’t just throw up your hands and hand over your credit card. You’re the parent here, and the onus of what your child wears falls on you. If your kid wears a racist costume…you’re kind of wearing it too. It's important to align with, and stand up for, people of color [and other marginalized groups], and a key part of that is showing respect for their cultures. To pretend to be a [minoritized] racial, ethnic, or religious group when you're not makes light of their history — and reinforces a deeply problematic power dynamic, wherein white people use, then discard, pieces of cultures they've subjugated for centuries just because they can. There’s no better time than when a kid is in their formative years to teach them that it's not OK to mock other people's cultures. That's the sort of attitude that will ultimately bleed into the way they behave and think as they get older — do they respect the personhood of those unlike themselves, or is their only concern doing whatever they think is fun? A Halloween costume is a small, easy way to introduce these issues in a way that a child's yet-to-be-fully-brain can process. This isn't about putting a damper on your kid's creativity; it's about exercising sensitivity towards anyone who doesn't get to choose how the world at large sizes them up. Whether or not your kids get that is up to you” (Redbook). . . We linked in our Stories a 4 minute video of 6 women explaining what cultural appropriation means to them and how it feels to see their culture worn and discarded on Halloween. See their reactions & listen to their message. It includes a written transcript. 📌What other costumes would you add to the list? [image description: plain bold black text on a white background that reads: “Cultural Appropriation at Halloween: My Culture Is Not a Costume”] #Halloween #HalloweenCostumes #Parenting

We imagined easy and last-minute costumes would trend at the last moment, and compared Search results from October 17th, 2018 - October 17th, 2019. Sure enough, conversations spiked during Halloween last year. While some brands and organizations found their own ways to participate, most of the content in 2018 came from bloggers, makeup artists, and writers who often capitalize on commercialized holidays. 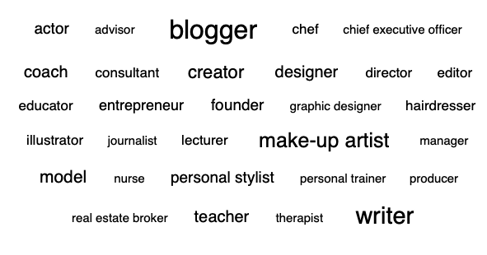 In terms of costume material, both cardboard and duct tape, were mentioned frequently in instructional posts.

Unsurprisingly, the conversations around couples’ costumes online are less focused on inspiring ideas, and more on emulating celebrity couples', including John Legend and Chrissy Teigen, and Sophie Turner and Joe Jonas. 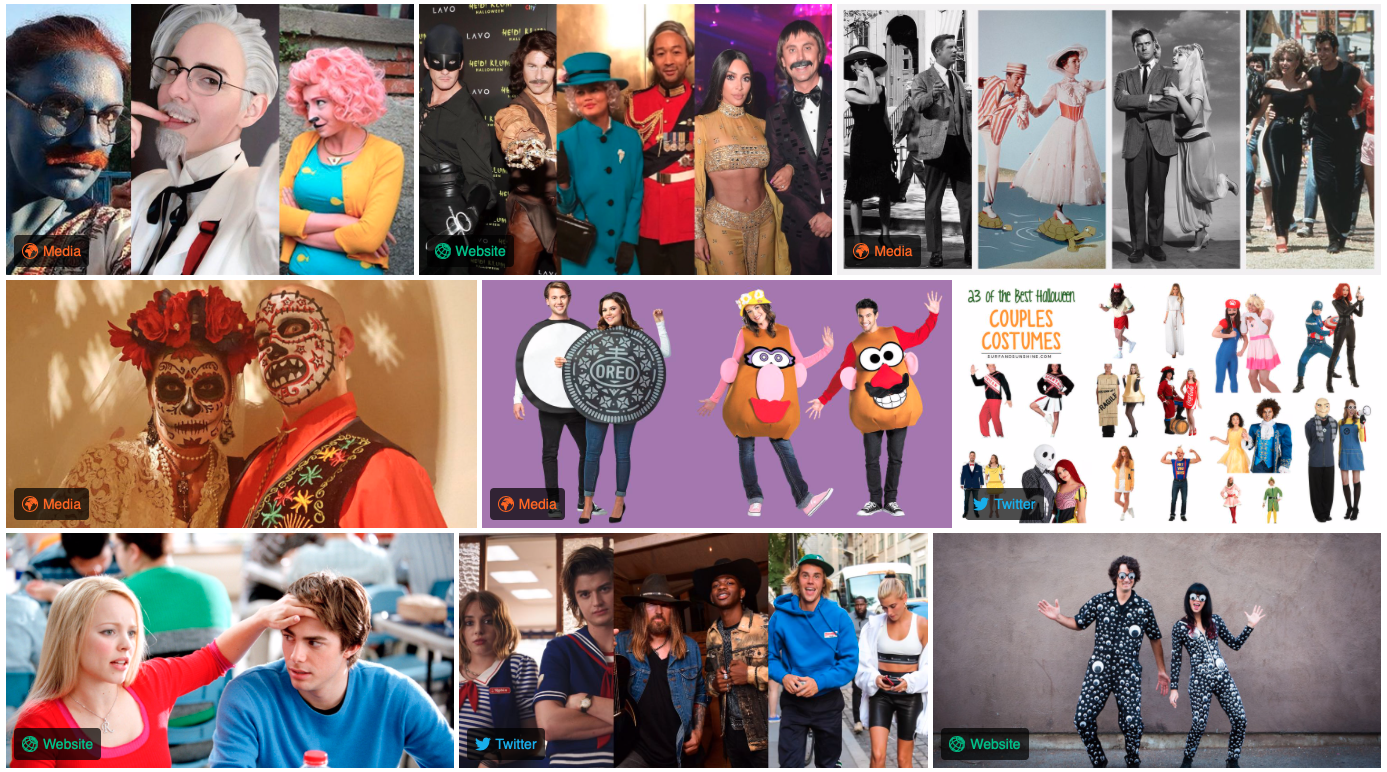 A trend worth checking out, is unique paired and couples’ costumes. People are relying less on traditional gender stereotypes (e.g socket and Plug, female nurse and male doctor) and embracing unique duos like: milk and cookies, Lil Nas X and Billy Ray Cyrus, and googly eye bodysuits that don’t require a male-female partnership.

It wouldn’t be a family holiday if pets weren’t included, especially when it comes to dogs. Unlike human costumes, dog outfits have a place on social all year round. Throughout the year, posts include dogs mermaids, theme and event style costumes, and dogs drumming up likes on brand pages.

Pet costumes range from simplistic (tiny hats, vests) to complicated (multiple pieces, bulky accessories) and as category, earn some of the most likes on social media. Two pooches in the spotlight this year are the Mop Dog (from 2017) and Chucky dog.

When browsing through 2019-specific costumes trends, DC or Marvel were prominent. And its no surprise considering Joker, Avenger’s: Endgame, and Spider-Man: Into the Spider-Verse, were major box office hits since Halloween 2018. Politicians were another trendy option for up-to-date Halloweeners, including Donald Trump, Elizabeth Warren, and Joe Biden.

Nostalgic trends like Mean Girls, the Addams Family, and Friends also resurfaced this year. And 2019’s drink of the summer, spiked seltzers (especially White Claw) have appeared as one of the trendiest choices this Halloween. This leads us to this year's star of the show, Yandy, who recently had a minor moment in the spotlight with their “Sexy White Claw” costume.

Yandy.com: A costume for any occassion

Yandy.com is an online retailer selling lingerie, swimwear, Halloween costumes, and women’s apparel. They sparked an online discussion in 2018 with a controversial “Brave Red Maiden” costume in tribute to The Handmaid’s Tale. This season, Yandy.com appears to be doubling-down on semi-controversial costumes. Here are the entities related to Yandy.com in online conversations, keep in mind many of them are billed as “sexy” costumes: 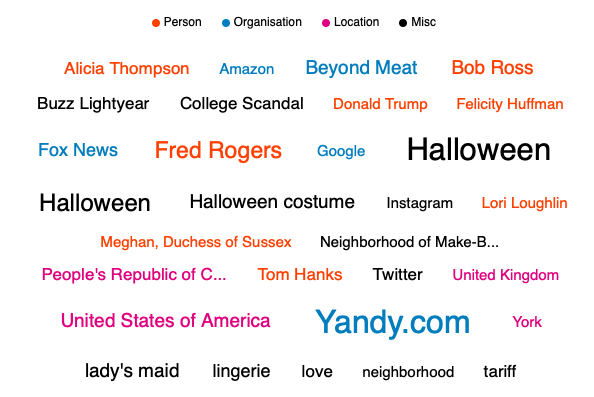 You read that right. For 2019’s Halloween season, Yandy.com will give you a choice of dressing up as the “Nicest Neighbor” aka a “Sexy” Fred Rogers from Mister Roger’s Neighborhood (sorry, childhoods everywhere), sporting a “College Admissions Scandal” costume that resembles a prison jumpsuit, or wearing a “Miss Impeachment” costume that mimics a beauty pageant look. Food-inspired costumes appeared on Yandy.com, including “Sold out Chicken Sandwich”, “Hard Outlaw” (read: Sexy Water), and “Beyond Beef” outfits (a “plant-based” headband gives away the meatless aspect). With the exception of the beloved Mr. Rogers and “Beyond Beef” in vegetarian-friendly areas, none of these costumes would have made much sense last year.

While it might seem risky to create one-season or trendy costumes because they're a passing fad, Yandy.com counts on it to drive costume sales during the holiday season. Like many fast-fashion options, costume manufacturers often produce low-craftsman-ship, high-popularity items with the idea to leverage FOMO. If you don’t dress as a sold-out Popeye’s sandwich this year, WHEN will you get the chance?

That said, most of the costumes that Yandy.com produces are not limited to one year’s cultural events. Roughly one-third of the costumes listed on their site are new in 2019 and many of those newly-introduced costumes play on professions like nurses and cops or “sexy” animals.

As a result of Yandy.com’s approach to creating a shocking yet inclusive costume inventory, the brand has generated word-of-mouth awareness and increased brand recognition. Their ability to leverage trends for the Halloween shopping season has earned them hype as October 31st approaches. 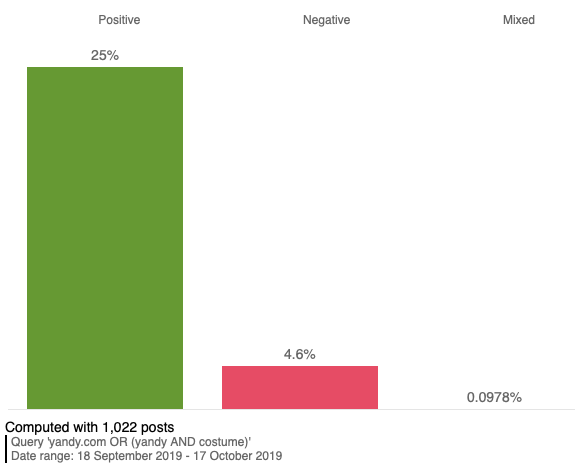 Whether you prefer a DIY costume, picking outfits months in advance, last minute decisions, we wish you a trendy trick-or-treat!

Want to learn more about trends, how they unfold, and who's driving them? We can help. Get in touch!