How Car Brands Pushed E-mobility at the Super Bowl 2020 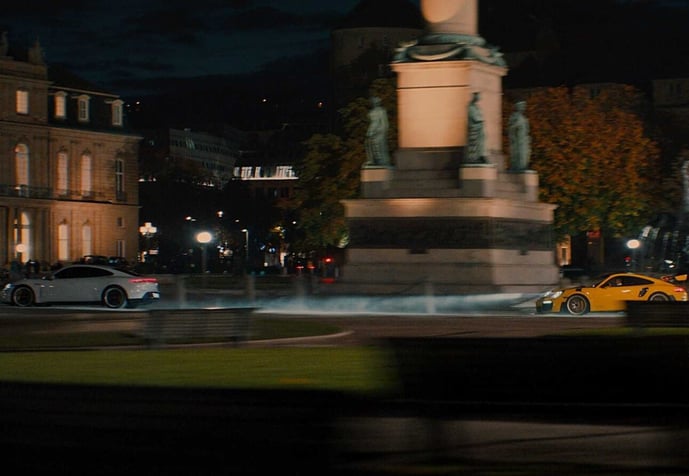 This enormous global reach is something that companies can't afford to miss, making the commercial breaks, in keeping with the rest of the Super Bowl, a true media spectacle. The space for a 30-second spot alone costs at least 5.6 million US dollars. This immense price makes the Super Bowl the scene of probably the most expensive and elaborate marketing competitions worldwide. With blockbuster-quality commercials, plenty of star power and a clear message, they give it their all to stand out from the crowd.

In the age of social media, the target group is right amidst the action. Not only did the Web cheer live during the game, it also had a clear opinion about the commercials being aired. And as we all know by now, consumers are the harshest critics.

In addition to the food industry and the US American election campaign, the automotive industry took up a large part of the advertising schedule. Car manufacturers focused on their latest innovations in the field of electric mobility. Porsche, Audi and General Motors, in particular, provided plenty of content to discuss.

Last week alone, around 11,000 posts with an estimated reach of 38 million were sold around the car commercials.

All three manufacturers have one thing in common - E-Mobility. By bringing their new electric cars to market, they are drawing attention to a sustainable future in the automotive industry. In doing so, the manufacturers have promoted the topic in various ways, setting themselves apart from the competition with clear positioning.

Conversations on the web we're enthusiastic about the development, and we're clearly  reflected in our Emoji cloud.

General Motors created a biggest buzz by announcing their comeback with the new Electro Hummer.

In their spot they focused on the technical product features. Our #Cloud reflects this focus. In connection with commercial, the net discusses especially the topic "Hummer". The discussions on this topic, took place mainly on websites and forums. 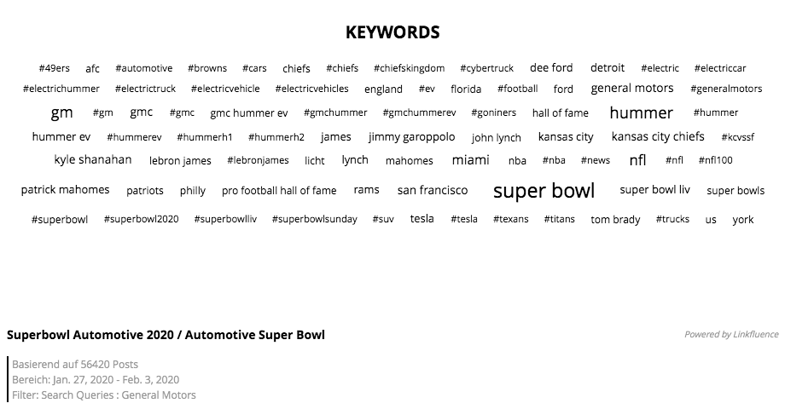 With the spot they mainly address a male target group. 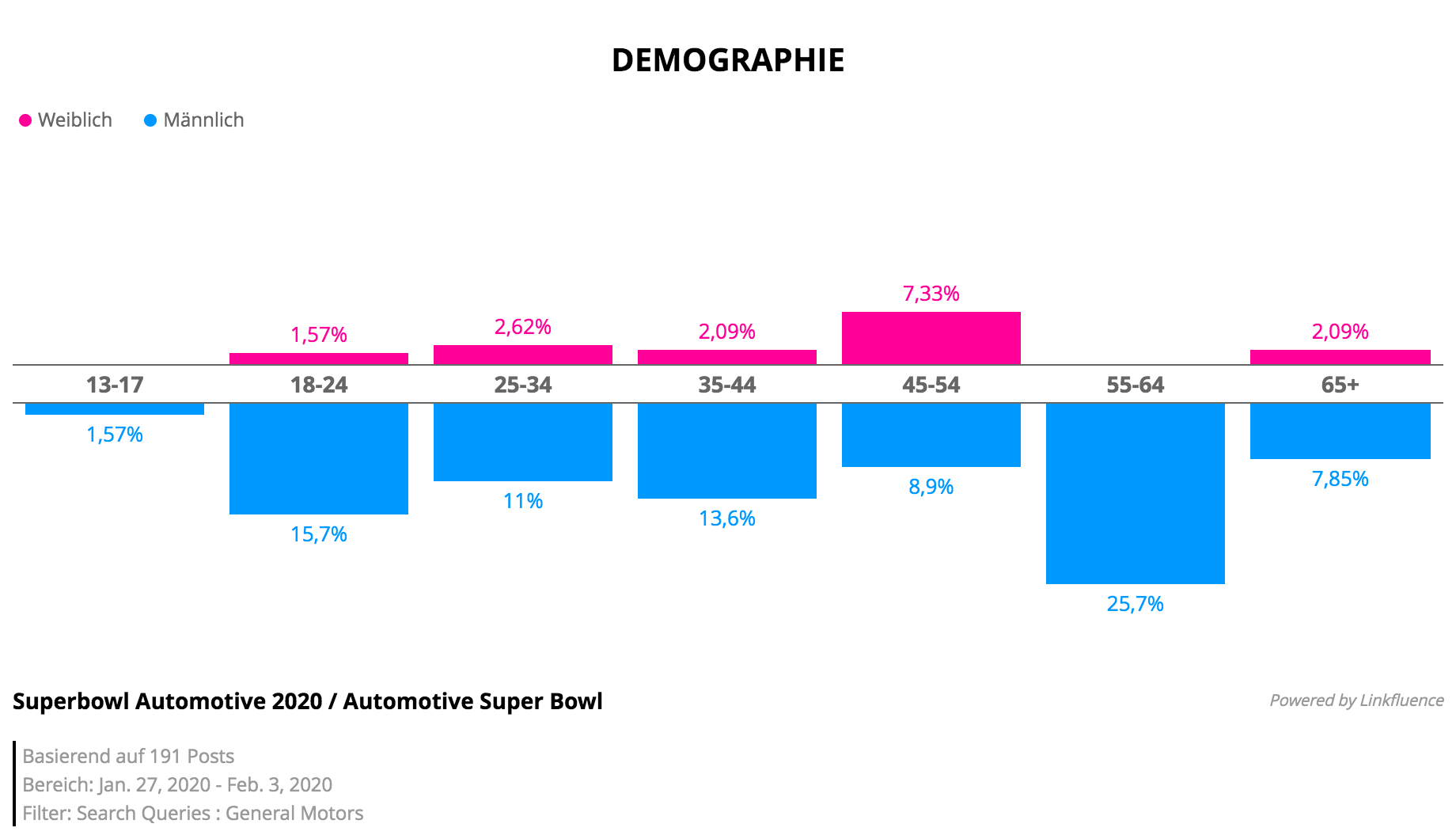 The Porsche Commercial was released a week before the Super Bowl and went viral. Last week they reached about 3,800 postings with a reach of about 14.5 million. Compared to the other manufacturers, Porsche stands out especially because of its predominantly positive tone. They are using the spot to put their masterpieces of recent years back in the spotlight and at the same time position themselves in the direction of e-mobility. The whole ad is staged as an exciting chase, in which the new Taycan entices viewers with its speed and quiet chassis. Porsche relies on the brand's confidence in producing good cars, and packages this in a commercial that fans love.

Porsche commercial was AMAZING! Best one hands down. #PepsiHalftime #SuperBowl

They also succeed in focusing on the vehicle and its technical features, and in particular in reaching the male target group. 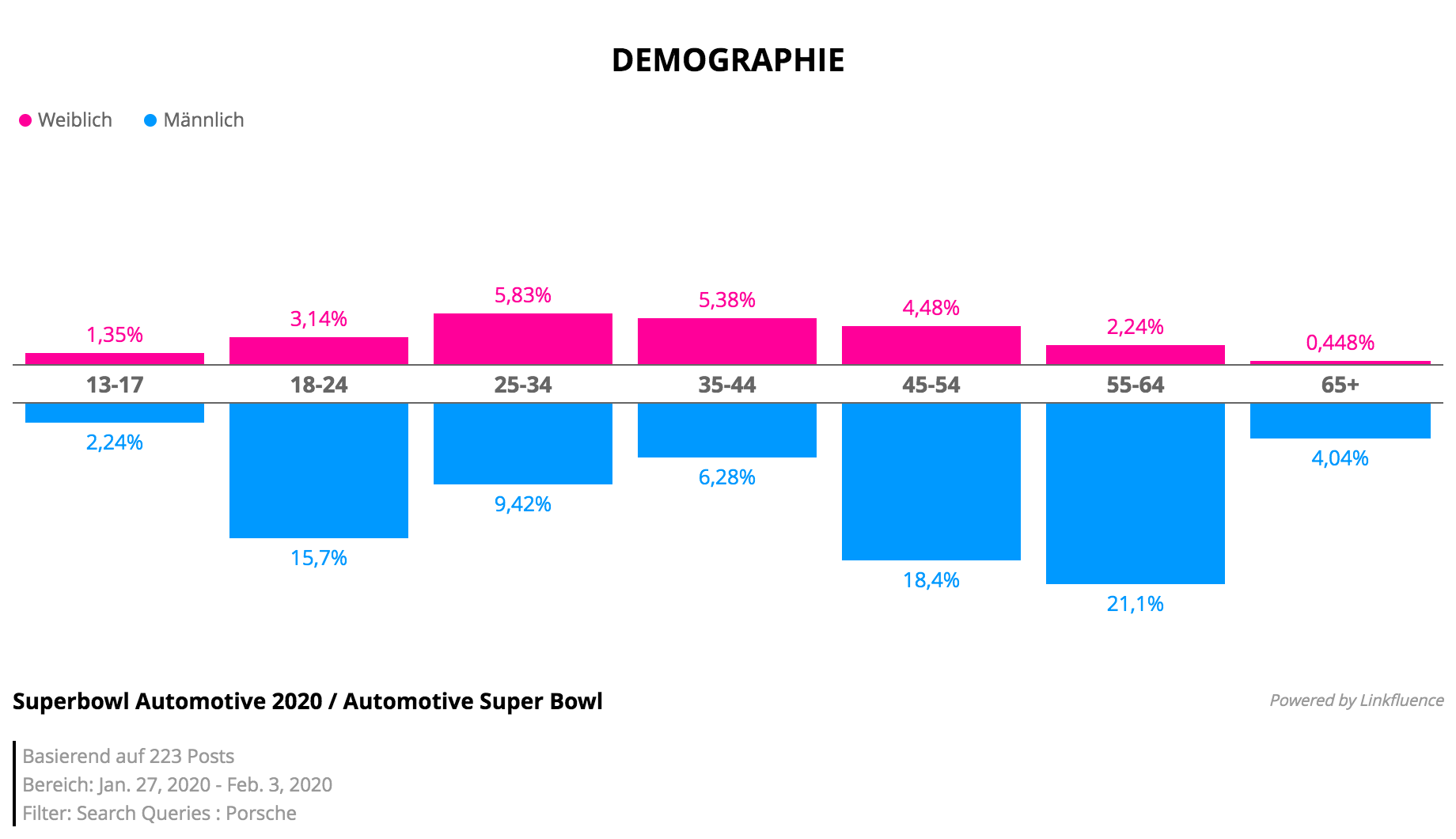 Audi relies on celebrity support in the Super Bowl spot. This shifts the focus of the social media community away from the new Audi E-Tron and towards topics like Game of Thrones and Frozen. All in all, it creates a sense of community and promotes the path to a sustainable future.

The associations with Frozen and Game of Thrones, as well as the strong message, appeal to both the male and female target groups. 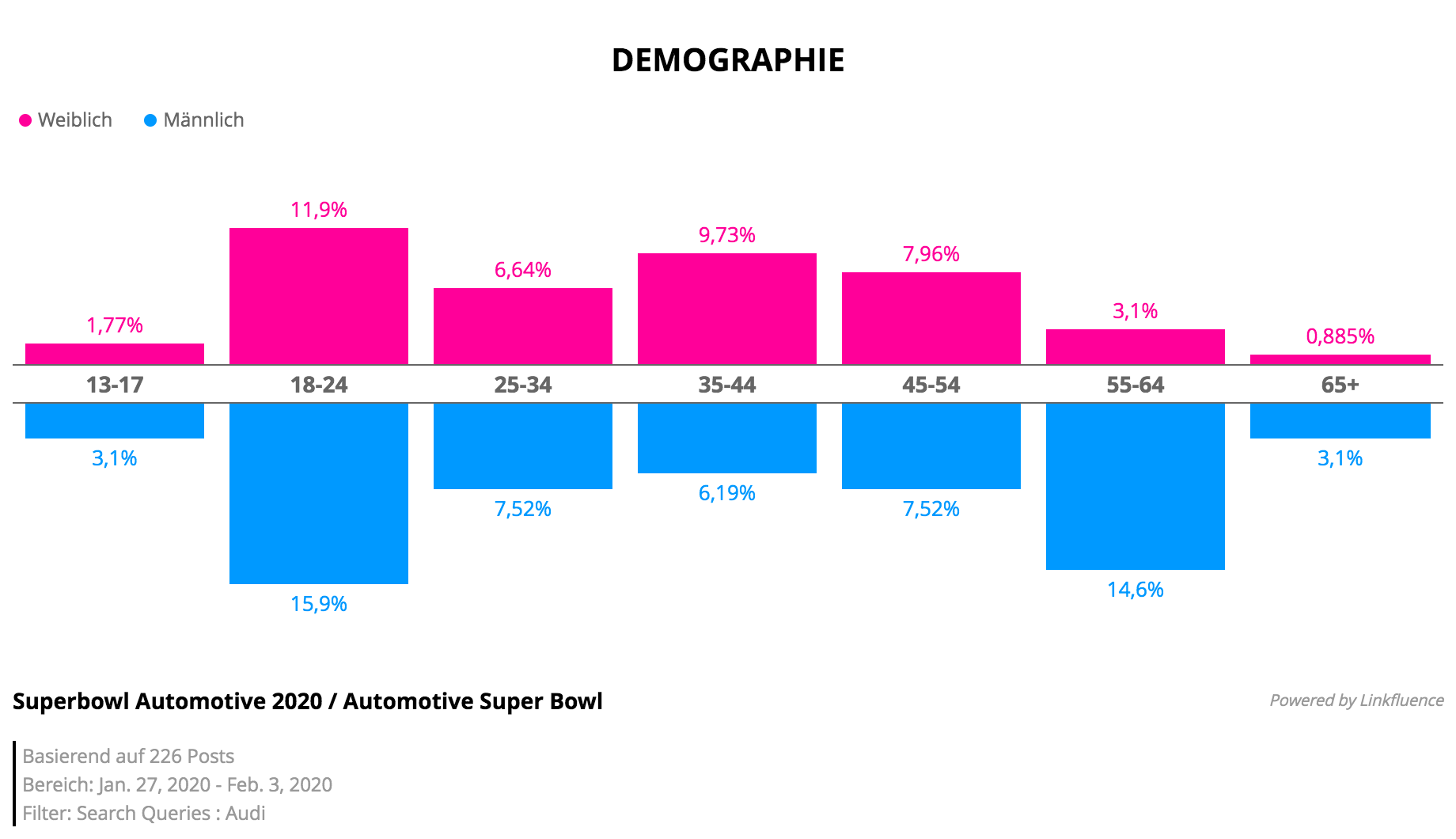 So what does this have to do with Tesla? Although Tesla did not run a commercial, it didn't go unmentioned in the discussions about electric-mobility. The marketing winner through a spill-over effect was without a doubt Elon Musk. With Tesla, he has made an important contribution to the realization of e-mobility and is considered a pioneer in this field. And as we all know - the web never forgets. That's why the conversations about electric cars in Super Bowl Commercials are largely connected to Tesla and thus become free advertising for the brand.

Comparing the number of posts by viewers to the respective spots, General Motors is in the lead with almost 4,000. Closely followed by Porsche with a respective 3,800, Audi with 3,000, and Tesla with 800. 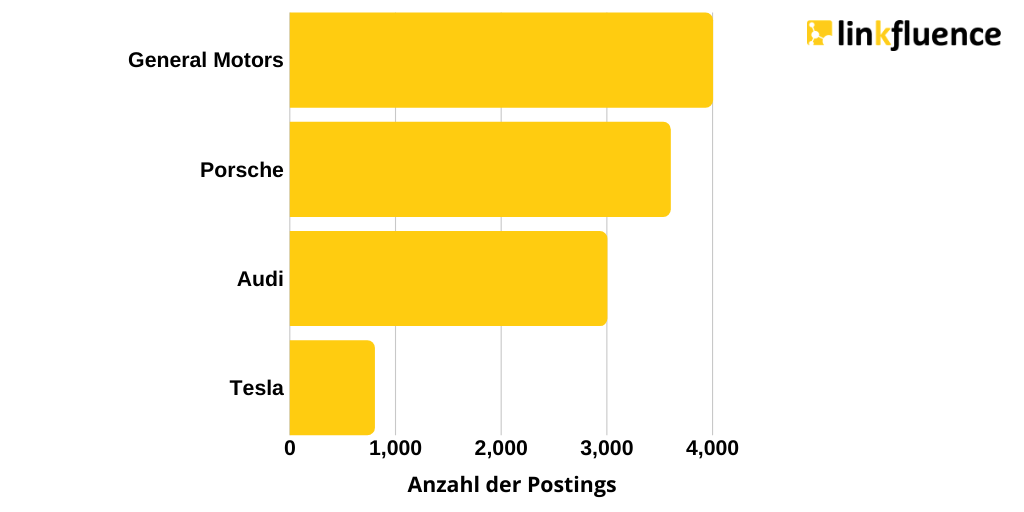 In our live Webinar we will give you more exciting insights about the spots and show you how you can use this information for your own marketing success in 2020. 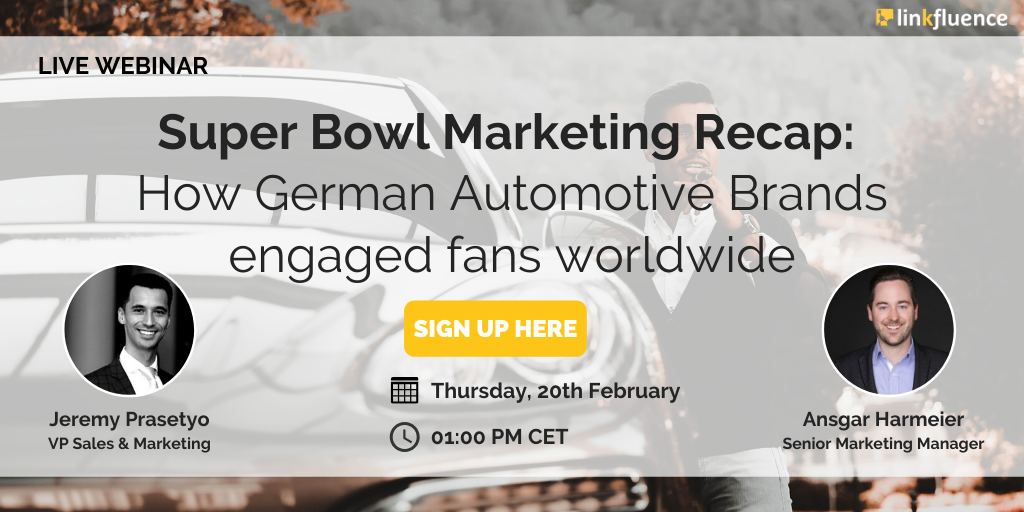