IF YOU’VE GOT IT, HAUNT IT! HALLOWEEN FANCY DRESS TRENDS IN 2018 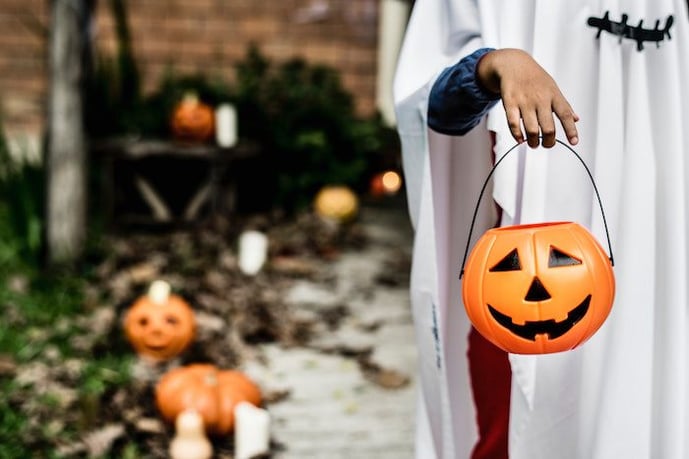 We rummaged around Linkfluence Search* to see what trends were catching the eye for spooky season.

*All data collected from 1st-31st Oct

As the year ends, an annual celebration approaches, Halloween; where children knock on doors asking for sweets, and disgruntled teenagers show their dismay at unanswered doors by covering houses in eggs – I think it’s safe to say, get stocked up on sweets!

Mentions for Halloween doubled as October 1st hit, with 18-25-year olds being the most vocal on the annual celebration (originally made to remember the dead). Females in this age range spoke more about Halloween, accounting for nearly 25% of total conversation.

But what trends were the most popular when it came to everyone’s favourite part of Halloween, getting dressed up?

The rise of extreme make-up

Make up bloggers took up a large majority of the female demographic in the 18-25-year-old range by sharing their Halloween inspired make up looks on Instagram. Make up fanatics created looks which were Halloween themed by incorporating bats and skulls and using out of the ordinary colours such as bright blues and oranges for dramatic effect. 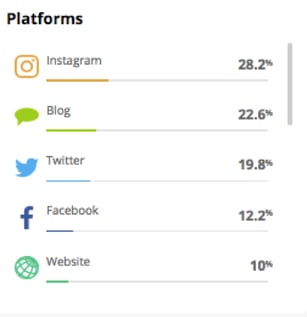 Instagram was the platform of choice for Halloween based posts

Posts made by these make up lovers focused very heavily on creating looks, rather than advertising the products they used to create them. ‘Mini-tutorials’, often shown on Instagram in video format, were commonplace. The MUA (make-up artist, FYI) would hold up what products they used to create their look. Noticeably, Instagrammers were focused on the look rather than promoting make-up products. Halloween influencers were all about self-promotion. Often, they were encourage their followers to replicate their looks for Halloween, or at least be some sort of inspiration. Many influencers encouraged engagement as opposed to purchases, writing ‘mention me if you try this’ or ‘show me what you guys are doing for Halloween this year’.

Beyond this, the sparkly Instagrammers were not focused on creating the ‘prettiest’ look, if anything – it was who could be the most eccentric with their designs! Looking at these bloggers, it wouldn’t be replicating a classic Halloween costume, it’d be making it even scarier and colourful and making the most out of all those make up palettes acquired through the years.

Interestingly, eye make-up was the most discussed area. Mentions of eyeliner, eyeshadow, mascara and eyebrows were key to looks which were praised by followers, an area that is heavily focused on Instagrammer’s posts to achieving their Halloween looks. This is evident from the topic wheel, and honestly, by just how much effort these bloggers really put into their eyes when making these AHAMAZING looks. 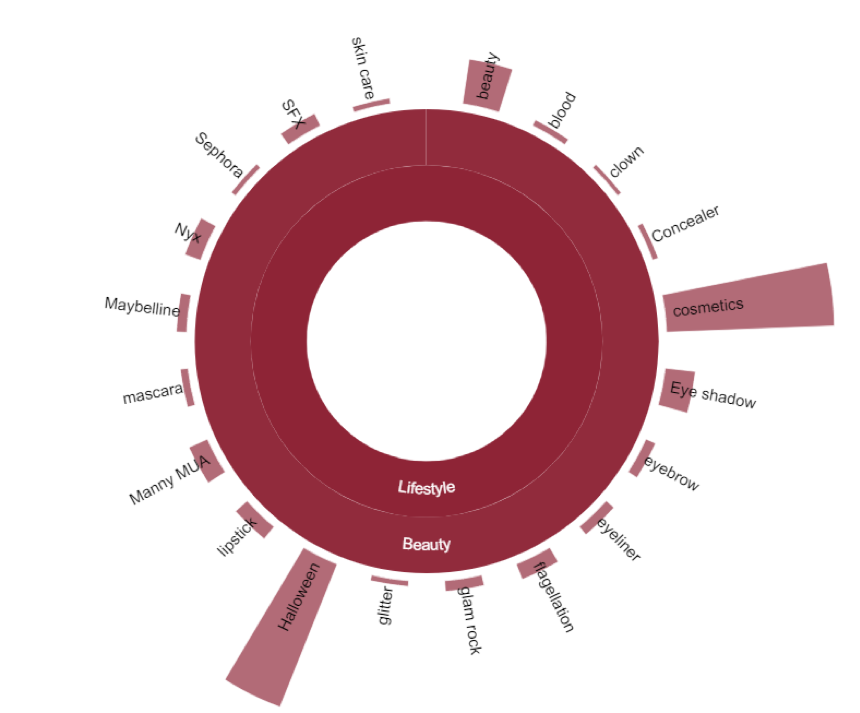 Topic Wheel: Most discussed beauty topics for Halloween based discussions

It wouldn’t even be Halloween if we didn’t talk about costumes would it? The biggest question around the whole October period, amongst those who do plan on dressing up anyway, 'what are you going as?'

The possibilities are always endless, it wouldn’t be Halloween if one of your friends turned to you and said ‘oh it’s too early too even think about’ – till the 31st and they sling on all their black clothes and some drawn on whiskers – ta dah, I’m a cat! Again.

Traditional superheroes and villains were the most commonly discussed dress up ideas, including the likes of Superman, Batman and the Joker. Additionally, characters recently seen in pop culture were mentioned as costume ideas amongst consumers.  These included the likes of Pennywise from Hollywood movie IT and Harley Quinn from DC movie Suicide Squad.

And finally, who doesn’t love a top used emoji analysis. Here are your Halloween top 3: