If you’re not already acquainted with Gen Z, where have you been? After millennials, they’re the demographic cohort born between the mid 90s to mid 2000s. In 2019, that means anyone between the ages of 7 and 22. The majority of this generation is still well below voting age and considered pretty uninteresting in terms of societal influence, but it appears that Gen Z is being wrongly overlooked for many reasons.

There's a new kind of shopper in town and despite their young demeanor, they’re disrupting brand and business strategies across the globe. This influential group is growing in number and spends more time than ever online, providing a clear indication of what's hot and what's not.

Similar, but far more extreme than Millennials, Gen Z is over traditional advertising. Instead when it comes down to consumer choice, they’re placing trust in their peers and tribes to find the best products. This is where influencer marketing comes in, how should you approach this new cohort?

We want to explore the right way to engage this group through influencer marketing, so you can engage the consumers of tomorrow. But before we begin, let's take a look at Gen Z and what they stand for.

Who are Gen Z and what makes them important?

Having crawled straight into the 21st century, Gen Zers are the first generation to grow up with no distinction between online and offline reality.

Since birth they’ve had access to social media, digital entertainment and smart technologies, while growing up alongside major modern innovations. So despite their young age, this is actually the generation with unprecedented influence.

IBM calls them self-reliant ‘digital natives’, and rightly so. In 2017, their global survey of 15,600 Gen Zers, aged 13 to 21 produced impactful results on their true economic influence.

Gen Zers are found to influence in all areas of family spending on both small and large consumer decisions.

Alongside their individual influence, this generation is also taking lead in numbers. By 2019, Bloomberg predicted Gen Zers to surpass Millennials for the first time, accounting for 2.47 billion of the world’s 7.7 billion inhabitants - a whopping 32% of the global population. Thanks to these statistics, brands and businesses in recent years have hailed Gen Zers as the 'next crop' of consumer.

One of the best ways to tap into this generation is via their own peers and communities. This generation is all about relationships and now more than ever, it's important to relate with tribes and influencers, before they align with you.

The key to any successful marketing campaign is using the right platforms. Looking at the top mainstream video platforms, Gen Z have increased their usage of all three compared to Millennials in 2018. Naturally, they've evolved into a mobile dominated generation and this rise in usage is guiding future digital trends in terms of marketing, branding and advertising.

Aside from these mainstream channels, Gen Zers are increasingly adopting non-mainstream platforms. Here are two examples.

TikTok is one of the youngest and most successful apps to be propelled by Gen Z.
Launched in 2016, it's like the Instagram of video, allowing users to record and share 15 second choreographies. It’s to-the-point concept captures Gen Zers 8-second attention span and their preference for video entertainment. Globally, it's estimated that 66% of users are under 30 years old.

If you haven’t already turned to TikTok for influencer marketing among a younger audience...now is the time. With its simple UX, TikTok is predicted as the next big hit and because it’s still under the radar, brands can leverage its under-priced potential.

The same age as Snapchat, is live streaming and chatting platform Twitch, built predominantly for gamers but also other recordable activities. Statistics around Gen Zers on the platform aren’t very accurate but when you look at eSports in general, 44% of consumers are aged between 14 and 21, giving a good indication of Twitch’s popularity.

What sets Twitch apart is an 80% male user base, in contrast to Instagram’s heavily female-oriented users. But unlike Instagram, Twitch is made up of many groups of tight-knit communities that stick to a strict code. They reinforce Gen Zer needs around trust and authenticity and won't advocate any old brand that comes their way.

If brands can bring value to, and align with Twitch tribes, it could give them a great advantage over mainstream influencer channels. In the video below, Doritos sponsored four Twitch streamers in a competition showcasing Call of Duty: Black Ops 4’s new Blackout mode. Thanks to Doritos further cross-platform marketing, the Doritos bowl gathered over 16,000 viewers for the event, and probably a few more Dorito sales along the way.

Since we're discussing platforms, there's one in particular that revolutionized story telling features on social - Snapchat. It introduced the concept of disappearing photos and videos, which was highly popular among young audiences.

It's a generation born to swipe so quick snapshot storytelling works better on Gen Zers when its raw and simple. They're a cynical bunch moving away from flashy professional campaigns, wanting real people to tell it how it is.

One teen influencer doing it right is Emma Chamberlain. The 18 year old keeps it real and scored some 8 million YouTube subscribers and 7.7 million Instagram followers in less than two years. Her persona is just the right mixture of Instagram and reality, portraying fashionista style, without the airbrushed, overproduced deception. You’ll find her lounging with her friends, kicked back with no makeup on, or at home snacking on a pizza slice. She's relatable with all the style of a teen icon, unafraid to show her flaws.

im tanning w a facemask on🤣🤣🤣 .. might get a weird tan line on my face but also might not so we’ll see😳😄

3. Select influencers based on your target tribes

We can talk about authenticity all day. The time of mass marketing is over and micro-influencing is in. Gen Zers, more than their predecessors, are embracing individual differences in their various tribes, collectively breaking one-size-fits all marketing. They expect brands to prove their credibility through transparent communication and are more likely to buy from brands promoting a cause. If you can align with their cause, interests and tribes, you’ll find insider advocates willing to work with you, and more importantly bring you customers. Tip: The Meltwater social influencer tool is perfect to help you find the right influencer for your brand.

One of the most effective ways to promote meaningful messaging is the use of micro- influencers and peers in targeted tribes. Gen Zers are a generation seeking new creative opportunities that they can share online. An IBM study found 22% of Gen Zers make extra money online and a further 16% work for themselves. They want to shape their own experiences and are keen to advocate brands on their terms.

Florence Given is a 20 year old artist and champion of gender equality. With a humble but impressive organic following of 192K on Instagram, using the world of social to promote her illustrations and views on feminism.

--->SWIPE FOR VIDEO---> I love being single because of the endless opportunities for growth, and the freedom to constantly refine myself 🌹 I designed a t-shirt for @tinder_uk as part of their #SingleNotSorry campaign to embody this message, which is now available to purchase from my store! I also answered your questions about being single and queer dating on @dazed youtube channel, swipe for a preview the vid!! // AD

Being an outspoken writer, activist and bisexual, she scored publications in the likes of Cosmopolitan. And thanks to her powerful, uncompromising views she appeals to multiple tribes across social media that ultimately caught the eye of global brands. She appeals to singles, lgbt+, feminists, young females, entrepreneurs, retro fashionistas and more. The umbrella of interests around an influencer is an indication of the types of tribes you're trying to align with. In 2019 alone, shes already fronted campaigns with Tinder, Converse and Revlon.

Closely linked to Gen Zers entrepreneurial side is their willingness to collaborate with new brands. 44% of Gen Zers said they’d be interested in influencing product designs, 42% said they would take part in an online game for a brands campaigns, 38% would attend an event sponsored by a brand, and 36% would create digital content for a brand. This generation actually seeks out collaborative opportunities and face-to-face interactions.

But it’s not just digital stimulation they’re looking for. They want to physically interact with brands. Music festivals now dedicate entire areas to brand experience, encouraging young consumers to use their hashtag and create a buzz on social.

Here is an example of experimental marketing. Brands are increasingly turning to live events to create unique immersive experiences with their customers. A great example is the Royal National Institute of Blind People (RNIB) Karaoke Eye Test at Glastonbury festival. Their aim was to highlight the importance of regular eye tests through a fun-filled karaoke-themed activation.

“We wanted to play a meaningful role within Sónar and not just have a stand selling product,” explained Desigual’s CMO Guillem Gallego. Giant projectors cover the walls, accompanied by a complex camera set up with sensors that illuminate physical movement. They also created active meditation rooms for people to come and relax. 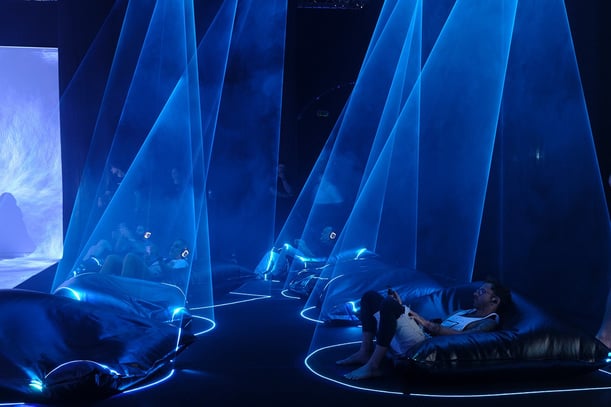 While trends come and go, we believe the relationship between Gen Z and influencers is here to stay. They’re a generation pushing for creative innovations and authenticity that can only be found among trusted members of their own tribes.

These empowered consumers have immense influence on their inner circles and with countless options available, they have the power to say no.

To learn more on how to engage Gen Zs and Millennials, watch our live presentation: Marketing to Gen Z and Millennials: How To Connect With Young Consumers Beyond Simple Demographics