Pride and the Pink Pound: Who's on the money? 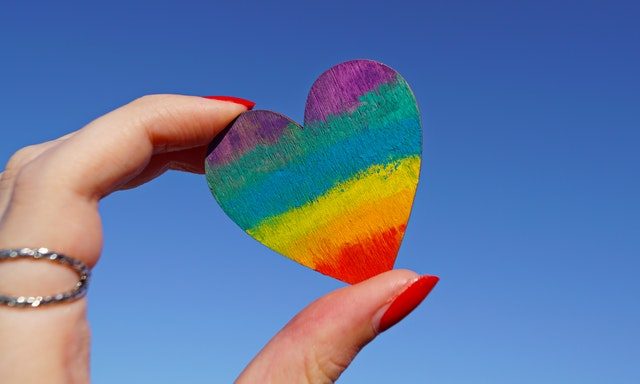 The first iteration of a London LGBT+ Pride march took place in Highbury Fields in 1970 and constituted around 100 men. Two years later, the first official ‘Gay Pride Rally’ marched down Oxford Street, now around 2,000 strong. 46 years on from that, after a fitful few decades of metamorphosis, 30,000 (including myself) marched two kilometres through the heart of the capital as part of Pride in London 2018. They were just a fraction of the million or so people thronging the streets of the city to celebrate the one of the biggest LGBT+ events in the world.

What had started as a small political protest for the rights and freedoms of gay men in the UK has swelled into a two day festival for people from across the spectrum of gender and sexuality, larger than Edinburgh and Cardiff combined. The LGBT+ community has broken into the mainstream, and - whether we like it or not – we’ve become a market.

One worth $5tn, according to the Drum

Even the most casual observers would notice the rainbows that adorned the marketing of dozens of household brands, from the offices of Natwest across the road from the Linkfluence UK offices, to Virgin Trains, the Army’s 2017 ‘This is belonging’ campaign, and of course the fan favourite, Absolut Vodka rainbow bottles. Many see this as a good thing, citing the importance of maximising and normalising the visibility of queer people in society. Luke Graham, writing for City AM, says that visibility is key: brands have the power to bring certain social issues to the foreground, not just through advertising but also through the promotion of visible networks and role models from the corps of their employees. Matt Measor, a risk analyst at a major UK bank associated with Pride and recent face of the bank’s OOH Pride campaign, highlights that in his opinion “being part of an organisation that allows colleagues to self-identify and self-disclose creates and maintains an environment where sponsorship of Pride isn’t a PR stunt” and that “sponsoring local prides is the right use of our resources to demonstrate our commitment to the LGBT+ agenda”.

We decided to dive a little deeper and use Linkfluence Search to explore how these Pride season campaigns were received by the social web. The subject certainly generates substantial traffic, with major brands

Who's getting it right

Coca Cola has an interesting history with Pride marketing: along with Ogilvy they famously turned a casually homophobic turn-of-phrase in Brazil into a moment of marketing genius, an example of where brands can use their power for good in reclaiming a phrase for the community it was designed to deride (as many minority communities actively reclaim pejorative terms historically used against them).

This Coke is a Fanta from jean zamprogno on Vimeo.

This generated significant conversation in Portuguese and Spanish and even though that campaign was from 2017, echoes of it still appear in conversation this year (5000 pieces of Twitter content containing the phrase in the last 31 days alone.

In 2018, a not insignificant amount of content was created around the new Italian Deputy PM Matteo Salvini, who attacked the drinks brand as an avatar of globalism and a proponent of the ‘gay agenda’ for its sponsorship of Milan Pride. This drew the ire of the social media users and the press, who took to Twitter (which made up 76.4% of content) in droves to denounce Salvini’s comments and in turn, boost the brand profile of Coca Cola in that market. 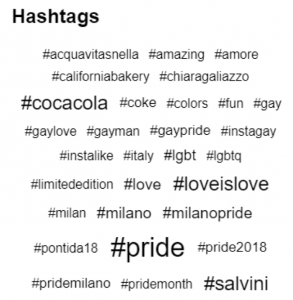 Most popular hashtags around Milan Pride

Virgin Trains took an interesting angle in engaging in some anti-homophobic activism through their Facebook channel - the illusive ‘KM’ from their social team generating rounds of applause online – while Absolut continued to provide visual delight as well as hard-hitting truths, evidenced by their share of voice primarily coming from Instagram (34.5% of content).

Which brands are falling short

Others are more sceptical, however, decrying marketing exercises as transitive pandering to queer audiences with no intention to advance the causes of the community. It even has its own word: pinkwashing.

The fact that Pride hasn’t got a healthy pot of funds for homeless/undocumented/broke queers with all of that Barclays cash is everything that’s wrong with it. https://t.co/KUQgdfUWCg

It goes back to the 70s when #Pride banned gays & lesbians support the miners as in the great film #Pride and had to change when coach loads of miners arrived so lead the march . Protest & struggle is what built #Pride. Not Barclays or Vodka as is today sadly

H&M had a triple whammy of bad PR, falling foul of the advertising and marketing sector’s LGBT+ network – Pride AM – for a somewhat tone-deaf portrayal of a bisexual relationship, getting embroiled in a transphobia row over a swimsuit, and most significantly the revelation that many items in its first ever Pride Collection were made in countries where homosexuality is punishable by life imprisonment.

Influencers played their part as well: Jaime Cullen led the Barclays float at Pride in London and posted the most engaged-with piece of content related to the Bank’s Pride activities (2,344 likes). Likewise, H&M benefited from a collaboration with Ru Paul’s Drag Race alum Aja, and Absolut from a Coachella event with Rita Ora. One could even argue that Coca Cola made an influencer out of Matteo Salvini, in a roundabout way.

How to get it right

Different companies approach Pride season in different ways, with varying levels of success. Whether you’re giving the proceeds of your pink pound earnings to LGBT+ causes or using your brand power to fight for acceptance and rights, there are certainly many ways for brands to be allies of this cause.

The key is understanding: your audiences, their conversations, and the narrative within which those conversations take place. Tone deafness is synonymous with a lack of listening, and we’ve seen that the best marketing campaigns (in this context at least) come from listening to the voices within an organisation as well as those coming from without.