Recovery & Reopening: How do customers feel about returning to businesses?

After countries around the world have been locked down for several months due to COVID19, some of the hardest-hit areas have started to slowly re-open different industries and businesses. Though many of these places have seen dramatic reductions in cases and infection rates, the virus is still spreading and still poses a risk of infection to individuals and society in general, as new outbreaks could be triggered. With the risk remaining present for employees and customers alike, everyone is doing their part to overcome the hesitation and fear of returning to places that have been avoided for months by creating safe and hygienic environments.

Retail stores, restaurants & bars, and concerts & sporting events have all been profoundly impacted. While these segments of the larger retail industry may function differently, the short and long term problems they face are quite similar. All of these businesses rely almost entirely on people being able to physically be present in their store, restaurant or arena. Without in-person activity, these businesses have been pushed to the brink. Sports teams and leagues are not faring well either and will continue to suffer the longer fans are not in their stadiums. Restaurants and bars are the hardest hit mainly based on how they generate revenue and the nature of the margins that the retail food industry operates on – they rarely ever have the capital or savings that some retailers and most sports leagues, teams, and stadiums have.

How are brands handling reopening?

As brands, companies and retailers reopen, it’s interesting to note the differences in engagement on social media posts of the respective segments in the retail industry. In general, posts with the highest engagement are controlled by brands that are announcing a detailed and organized plan for reopening. For example, in France, 19 out of the top 25 posts with the highest engagement were about brands and their reopening plans. 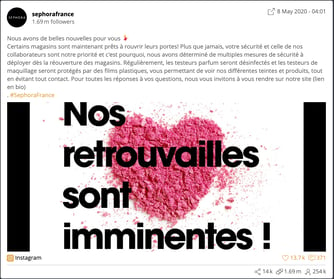 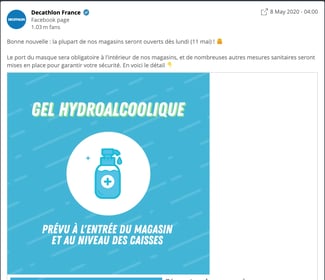 Examples of brands posting about reopening plans in France. 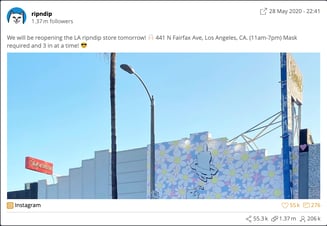 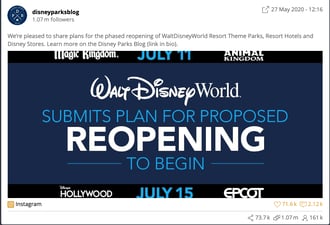 Examples of brands posting about reopening plans in the United State

The trend in conversations about businesses reopening in Italy in the last three months.

The trend in conversations about businesses reopening in France in the last three months.

The trend in conversations about businesses reopening in the United States in the last three months.

Focusing on reopening trends in the U.S.

Focusing specifically on industries within the United States, we can take a more in-depth look at some of the reopening trends that are emerging as lockdowns are ending across the country. 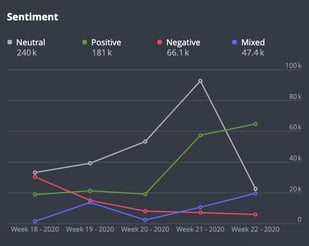 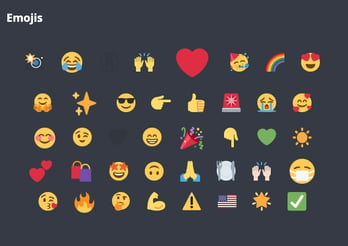 Sentiment and emoji reactions to the experience consumers are having with stores reopening.

From the end of April to the end of May, we can see the sentiment changing in a few interesting ways. The most significant is how positive sentiment increased as more regions in the US reopened and customers could begin returning to stores and restaurants. As positive sentiment increased, it makes perfect sense that negative sentiment decreased. It is also interesting to note how drastically neutral sentiment dropped off – leaving a gap between positive and negative sentiments that indicates people are feeling intense emotions amidst the current situation. The emojis connect closely to the sentiment trends as there are mostly positive emojis that indicate excitement for shopping and restaurants while also revealing people want to take precautionary measures by wearing a mask.

The good, the bad and the confused

These positive Tweets related to reopening reveal a sense of hope and love for local businesses while also showing excitement for doing things that people love. The post about Disney mentioned specific safety measures, which again is largely supported and appreciated by customers as reopening expands.

still life from home. dispatches from isolation in my kitchen studio in queens, one of the hardest hit areas on the states. in my neighborhood, some stores and restaurants that had been shut are reopening. it’s like seeing an old friend!! i get emotional over each small sign of survival and resilience and have to quickly turn away. we scan for the mo-mo trucks and the tibetan restaurants, not yet open. we rejoice at each shop that makes a comeback. “open for pick up,” sometimes hand written, sometimes printed, becomes a victory sign, a milestone passed on this long journey.

BIG DISNEY NEWS!! ✨⚡️📣 I am so excited to announce that @disneysprings begins their phased reopening TOMORROW with a number of restaurants and shops! And next week on May 27, many of their third-party operating participants will open their doors to Disney Springs guests. In fact, 3 Disney-owned and operated stores and venues will reopen: World of Disney, D-Luxe Burger (mobile order) and the Marketplace Co-Op. . . In accordance with government requirements as well as guidance from health authorities, they are implementing a number of new health and safety measures and operational changes like cashless transactions, physical distancing and capacity measures, temperature screenings when you arrive, increased cleanliness, limited parking and entrance openings, extensive cast member trainings, and requiring all guests and cast members 3+ to wear a face covering, except when sitting at a dining table. . . I have an entire list of what is open in my stories including an article from @disneyparksblog that you can read with more up to date information. One restaurant that’s going to be open is @planethollywood - where we were #hosted for dinner the first night we arrived in Orlando before the #DisneyCreators Celebration in February. We had excellent service, delicious food, and a really fun experience! Head to my stories to take a step back in time to our entire evening in action! . . . . #disneysprings #disneyspringsorlando #disneymom #disneymoms #waltdisneyworld #waltdisneyworldresort #orlando #orlandoflorida #disneyblogger #disneyfamily #foodblogger #disneylife #disneygram #disneytravel

Other posts reveal the confusion that people in some regions are feeling as regulations are perceived differently by different businesses and have led to conflicting messages and uncertainty relating to the proper protocols. The confusion has also led to doubts about the reasoning behind certain restrictions.

Posts carrying negative sentiment tend to be related to the economic situation, politicians, and the possible political motivations for either reopening sooner or later – dependent on the region and the respective political affiliation of the leader of that city or state.

Gov. .@dougducey insist on moving forward with reopening the state as virus spreads.

BUT loot an Apple Store in #Scottsdale
and a #curfew is issued.

in case it wasn't clear, this is the entire point of "reopen" conversations. "reopening" doesn't do anything about a pandemic reducing demand for restaurants and hairstylists and bowling alleys, but it does allow states to punish poor people https://t.co/uuhJHyOPjr

Industry breakdown of reopening conversations in the U.S.

Within the US, some segments of the larger retail industry have been mentioned more than others and have different levels of engagement and varying sentiment.

Most notably, restaurants & bars have the most mentions and highest levels of engagement. Given the personal nature of restaurants and bars, it makes sense that people are engaging more with these posts as they are excited to interact with friends when these places continue to reopen. Closely connected to these retail activities and their physical locations are the safety measures and precautions that patrons care about deeply.

The most discussed topic within conversations about reopening is mask-wearing (with a 2,000% increase in engagement), which makes sense given how vital it has become during the pandemic and how important it will continue to be as more cities, regions, and countries reopen their businesses.

As the world begins to slowly reopen to the “new normal”, we are seeing that different countries have different responses to reopening and that people value certain aspects of reopening more than others. While there may be several differences in the reactions to reopening across the world, one thing is for certain. People miss the traditional retail experience. Whether that’s at a shopping mall, a restaurant, or at a sporting event, most consumers are excited to start having the ability to enjoy some aspects of social interaction that they’ve missed for several months. Even though many are still concerned as the virus continues to spread, they are encouraged and motivated by the continued use of precautionary safety measures in public such as face masks, hand sanitizer, and enhanced cleaning.

Consumers are looking forward to supporting their local communities and local small businesses after so many have faced hardship in recent months. Though regions are beginning to slowly reopen, some parts of the world are currently being hit hard by the virus. Hopefully, in these tough times, they can look to places that are beginning to bounce back for a sign of hope and reassurance that things will improve, and at some point in the near future, we will be able to return to our favorite restaurants, shops and sporting events.