An Analysis of the Russian Social Media Landscape in 2019

Russia may not be the first market you think of when looking to expand your social media marketing. Overlooking the country's 70 million active social media users however, would be a major oversight if you plan to establish a business presence in the country.

In Russia company’s like Facebook and Twitter do not have the same market share they enjoy in Europe and North America. Instead, companies like VKontakte (VK) and OdnoKlassnik dominate the market. These companies don’t just operate in Russia, they have a significant presence in many of the countries of the former Soviet Union. 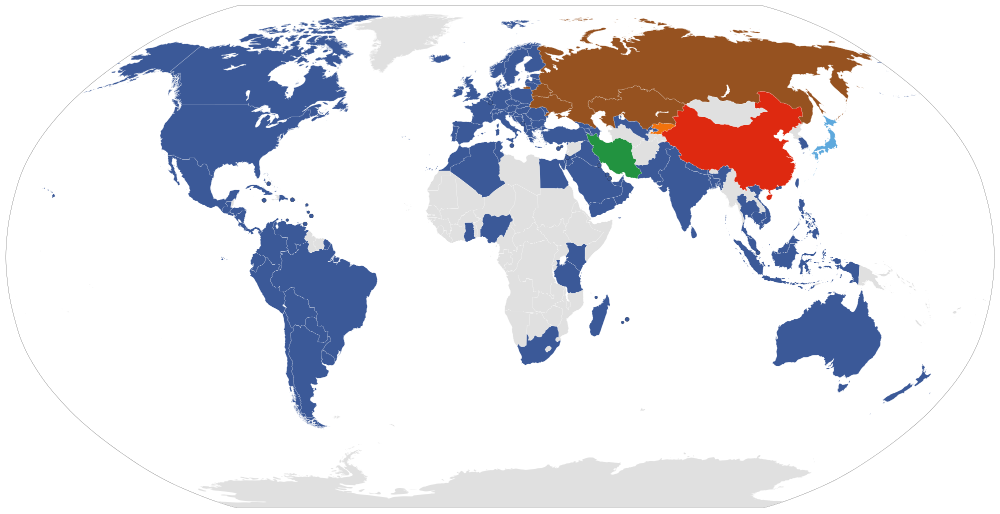 Source: Wikipedia. Most popular social media platform by country in 2015. The brown is VK.

Simply understanding how these native social media platforms work can be a stumbling block for international firms. Simply put, you can’t implement the same social media strategy in Russia and Central Asia, as you would in Europe, China or elsewhere.

In this article, I provide a whistle-stop tour of the most popular social media platforms in Russia. I’ll then guide you through the social trends and why they matter. Keep in mind when reading this report that different sources often provide conflicting data. I’ve tried to highlight instances where this happens.

Let’s start by looking at how you might profit from expanding your social media presence to Russia.

According to Russian Search Marketing around 49% of the Russian population, or 70 million people, are active social media users. This sites between Eastern Europe at 56% and Central Asia at 21%. That's not as high of a percentage of population as most western nations, but it does dwarf the proportion of active users of social platforms elsewhere in the world. 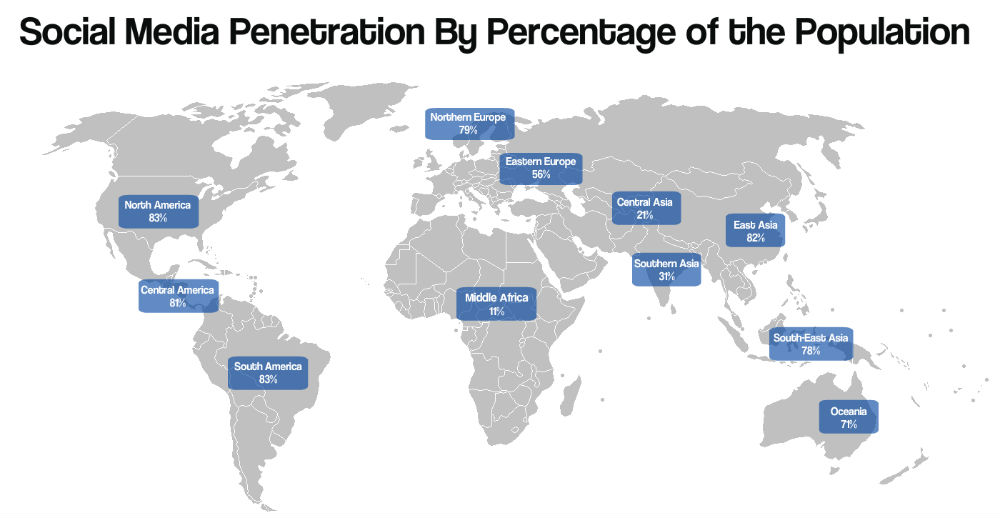 While that number might be lower than the US, Russians are embracing social media at lightning speed. Between January 2018 and January 2019, the number of social media users rose close to two million. In the same period, social media usage in the US remained static.

This same story is played out in a number of countries where Russian social media channels have a significant presence. It’s fair to say then, that this market will continue to grow for the foreseeable future.

The other thing to keep in mind when assessing this picture is internet speed, a contributing factor in which and how social media channels are used. According to Pingdom the average speed in Russia is 45.01 MBPS with a fixed internet connection, and 19.04 MBPS for a mobile connection.

Internet speed is increasing rapidly having seen a 20% overall increase in speed in 2018. However, there are significant differences in speed and coverage between urban and rural areas. 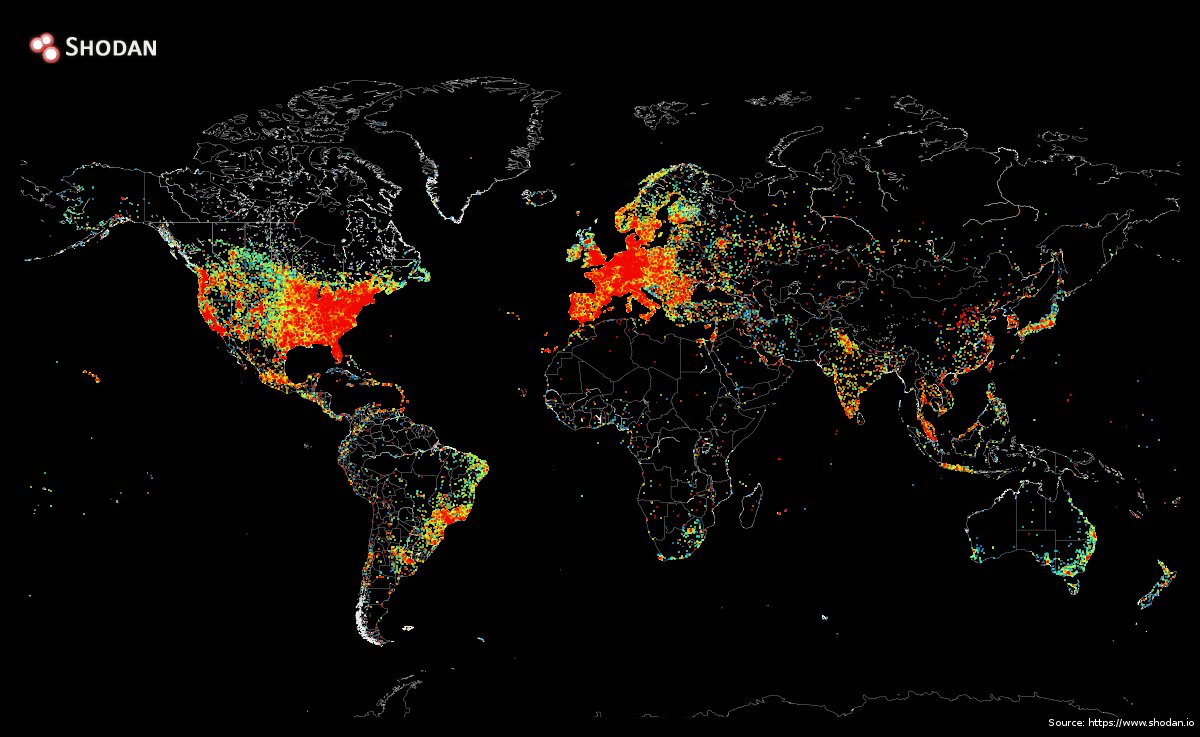 It’s not only the untapped potential of Russian social media that should appeal to global brands. It’s also the power of social networks and platforms over existing Russian users.

That means well-targeted and tailored social media marketing in Russia has a great chance of reaching a target audience. Global brands can design and deploy such marketing, but to do so, it’s crucial to first understand what makes the Russian social media landscape unique.

The market share enjoyed by US based social media networks is significantly lower. Facebook has a 39% share, while Twitter has 19%. Data from Similarweb provides some interesting insights into the top three social media platforms by users in Russia.

While these figures give you an overarching view of the landscape, you need to dig down into the demographics to get the full picture. Fundamentally different platforms and channels are more popular with different parts of the Russian population.

International platforms (Facebook, Twitter etc.) are more popular in Moscow and other urban areas. Just to give you a sense of how the data can be skewed, in 2017, it was reported that 50% of Russia’s Facebook users lived in Moscow alone.

The native Russian social networks meanwhile are far more popular in small towns and rural areas. The age and gender profile of Russian users of different social media channels also differs. Twitter is the only major platform where there is gender parity when it comes to Russian users. The other five most popular platforms (including OK, VK and Facebook) have more female users than male.

All those idiosyncrasies of the Russian social media landscape are vital for global brands to understand. They dictate how to tailor the expansion of their social media presence to the nation. That is if they want to boost their chances of success. We'll cover that in a bit more detail later. First, let’s take a moment to take a look at Russia’s unique social media platforms.

The two main International social media channels, Facebook and Twitter, don’t enjoy the same primacy in Russia as elsewhere. That’s not to say that Western social media platforms don’t have a significant presence.

VK is the largest social network in Russia. 83% of the country’s social media users are active the platform. That equates to the platform having close to 50m unique monthly users. As I mentioned earlier, it attracts a younger demographic.

In style and functionality VK is very similar to Facebook. Much of its popularity is down to its integrated file sharing capability. It lets users post both videos and music directly. When it comes to videos, VK rivals YouTube in Russia as the most popular video hosting platform.

VK presents a great opportunity to international brands thanks to its English interface. The platform’s targeting tools, too, allow brands to get really specific with targeted ads.

OK is Russia’s second largest native social media platform. Around 55% of Russia’s active social media users have an OK account. That means the channel ranks behind only YouTube, VK and WhatsApp. With over 30m unique monthly users it's more popular than Instagram, Facebook and Twitter.

Unlike VK, OK is more favoured by older Russians. It also has more female than male users. The age profile of its users may be explained by the nature of the platform. OK is similar to the now defunct UK-based social network called Friends Reunited. It’s designed to reconnect old school classmates and friends.

The demographic of OK users, presents clear marketing opportunity. Typical Russian users of the platform are older and often female. That makes it a great channel for exploitation by fashion or beauty brands.

Moi Mir, or ‘My World’ is Russia’s third largest native social media platform. It doesn’t achieve the same level of popularity as OK or VK, but does still have a significant presence. It is owned and operated as an extension of Russian email provider Mail.RU.

In essence, Moi Mir is a combination of a blogging service and a photo/video storage and sharing platform. It also has an instant messaging service that’s powered by the main Mail.RU email client.

Telegram has a growing presence in Russia, especially around Moscow and St Petersburg. It has a daily audience of more than 3.4 million people. The platform became popular in part after privacy breaches on other social networks. Attempts to block the messenger by the Russian Government had the opposite impact making this social channel famous. As a result, Telegram is known as a safe place for news and conversations.

Top Telegram channels that provide news have a daily reach of 5M views. Pavel Durov, the CEO and Founder of Telegram, used to be the CEO of VK.com. All his announcements, interviews and actions are always in the spotlight.

Youtube is the most widely used video streaming site in Russia. The platform attracts the interests of a cross section of Russians by age. For instance, all 10 of the most popular Russian Youtube channels are aimed at children. Top of this list is Get Movies, which provides kids cartoons.

Yet as an article on The Economist makes clear it is not just children who spend hours watching Youtube. The platform is also used by politicians to connect with their audience. Youtube affords significant opportunity for brands to connect with a diverse cross section of Russian society as this list of the top 250 Russian Youtube channels makes clear.

If you’re targeting a Moscow-specific audience, Facebook becomes a more viable channel. Statista does predict that the number of active users will continue to increase with an estimated 21.65 million users by 2022.

According to data provided by Facebook 13 million Russian users can be targeted through advertising campaigns. However, while this sounds respectable, quarter on quarter advertising revenue in 2018 actually dropped by 7.1%. This indicates that advertisers are choosing to spend their marketing budgets on other platforms. One underlying issue that could have played into this is the pressure that Facebook has seen from the Russian Government.

Of the international platforms, Instagram offers some of the best opportunities for global brands. Instagram, in fact, is arguably the most important of the international channels. Its popularity in Russia is growing at a faster rate than any other channel. According to data provided by Facebook 37 million Russian users can be targeted through advertising campaigns on the platform.

The channel’s popularity is on a rapid rise in Russia and presents plenty of chances for advertising. Brands who do look to use Instagram in Russia, though, need to use it in a Russian way. Captions are typically much longer on Russian Instagram posts. Users also expect posts to be more often linked to other social media channels.

Both Facebook and Instagram can also work well for building the HR brand of your company. This is a potential opportunity for international companies that need software developers are Russia is known for its programmers, engineers and marketing specialists who offer professional service skills for a reasonable price.

The bottom line is that you must think local when leveraging Russian social media. You must use the channels most popular with your target audience and use them in a way that’s most likely to reach them. If you do, you could reap the rewards of getting in early to a social media market that’s still growing.