Social Media Politics: How the Trump Presidency is Shaping Twitter 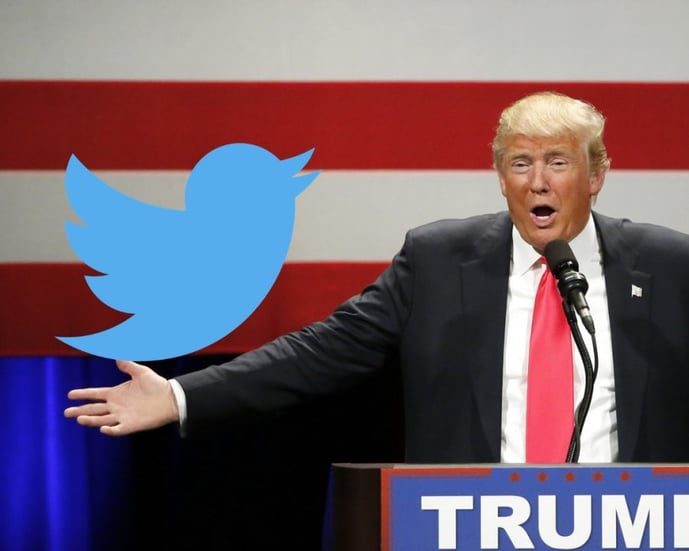 No matter where you stand on the man or his politics, one thing is certain: no other modern public figure has taken to Twitter quite like Donald J. Trump.

Whether he’s sparring with media foes or dredging up insults for political rivals, the 45th President has a knack for direct and entertaining communication. With every brash, combative tweet, his supporters only seem to love him more.

The November 2018 midterm elections have only served to illustrate this trend, with Trump serving up a daily barrage of tweets taking aim at the Democrats, the Dodgers baseball team, and even Twitter itself.

Commentators have spent countless column inches looking at the ways in which the modern social media environment - including Twitter - has assisted and enabled Trump’s rise.

In this post, we'll look into how the Trump presidency is shaping Twitter as a platform, what this tells us about social media politics and trends, and what these means for business.

To begin, let’s travel back in time to what feels like many centuries ago: 2006.

“The SMS of the Internet”: Twitter’s origins

Created in early 2006, Twitter’s founders established the global messaging platform as an accessible way to spread information. Optimistically referred to as “the marketplace of ideas”, Twitter offered a useful means to sidestep traditional broadcasting methods.

The platform quickly gained popularity. By the end of 2012, over 100 million users around the world were posting 340 million tweets per day. An active Twitter presence became the norm for major businesses and public figures.

Twitter’s potential as a tool for political organization soon became apparent: the platform played a central role as an information hub during the Arab Spring and Occupy Wall Street movements, as well as in the UN HeForShe campaign.

In these movements, Twitter was a key tool to amplify social change. By connecting people to information and resources, coordinating social networks, and calling attention to issues and needs, Twitter became an indispensable platform to assist democratic processes.

When Trump was getting set to announce his candidacy for president in June 2015, Twitter formed a central part of his communication strategy.

When people think of Twitter, Trump is one of the first people who come to mind.

A lot of this comes down to his unique style: punchy, irreverent chunks of language which read more like playground smack talk than announcements from an elected official.

A vicious accuser of Justice Kavanaugh has just admitted that she was lying, her story was totally made up, or FAKE! Can you imagine if he didn’t become a Justice of the Supreme Court because of her disgusting False Statements. What about the others? Where are the Dems on this?

For his supporters, this is all part of his appeal. Trump’s tweets are seen as raw, unvarnished reflections of his personality. In a world of careful statements and safe language, such a jarring and blunt approach is seen by many as a breath of fresh air.

Trump seems to understand how much his supporters want to be entertained. This might be why he had averaged about ten tweets per day during his presidency.

Twitter is a natural fit for such a combative figure, compressing his brash statements into a concise format for a wider audience. This has earned him a huge following: as Trump himself has said, he probably wouldn’t be president without Twitter.

To avoid making assumptions without any data, we looked at a sample of 13 million negative tweets in our database from the last 30 days on Linkfluence Search:

We see that negative tweets are mainly about US politics, from men between the ages of 55 and 64. This coincides with the demographics of the average Trump’s supporters, more male than female, and more old than young.

In the Topic Wheel below, we can see a breakdown of the most discussed topics among the 13 million negative Twitter posts, with Donald Trump and the two parties leading the negative conversations: 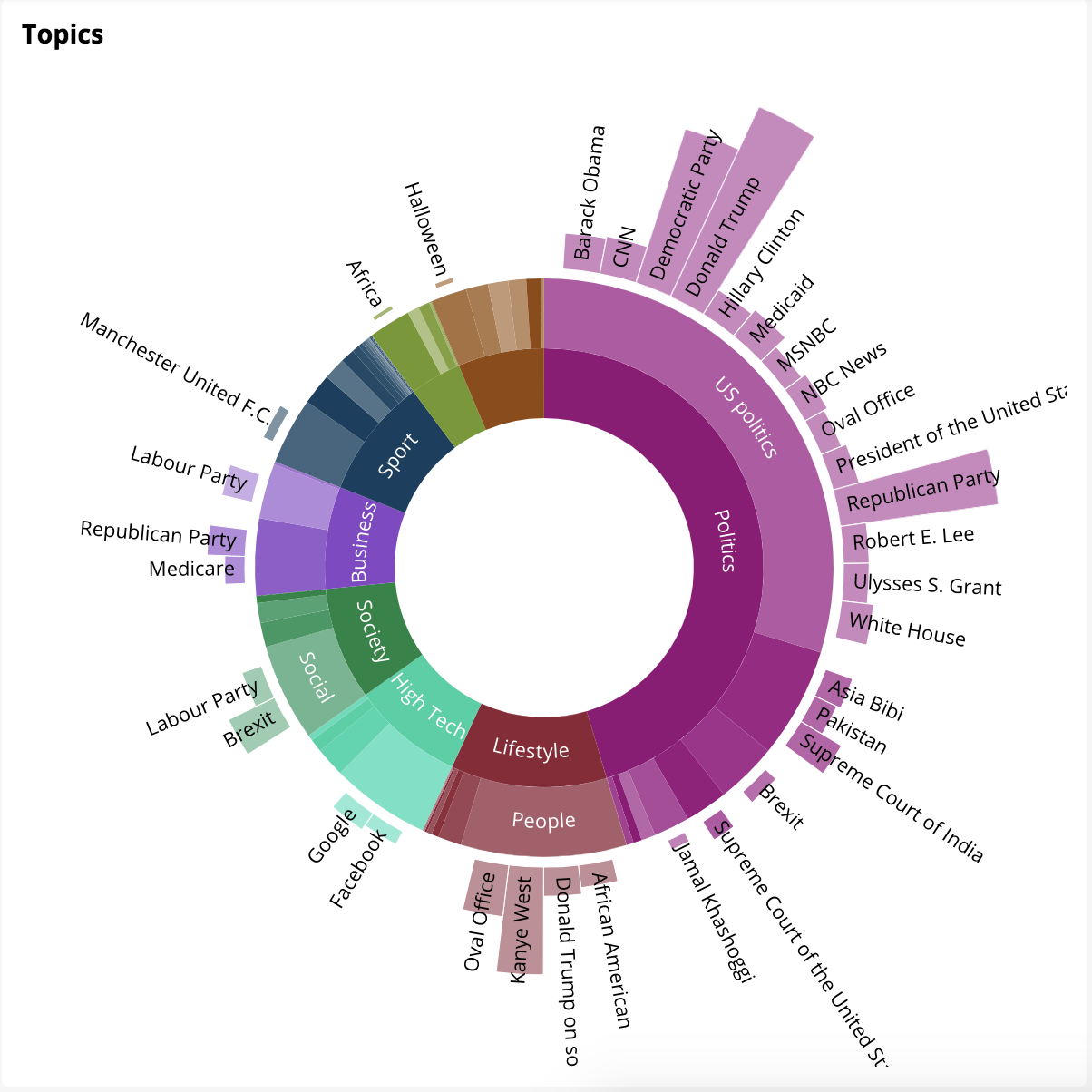 What’s interesting is that in the same Topic Wheel, we see a second category for Donald Trump, with a specific focus on social media: 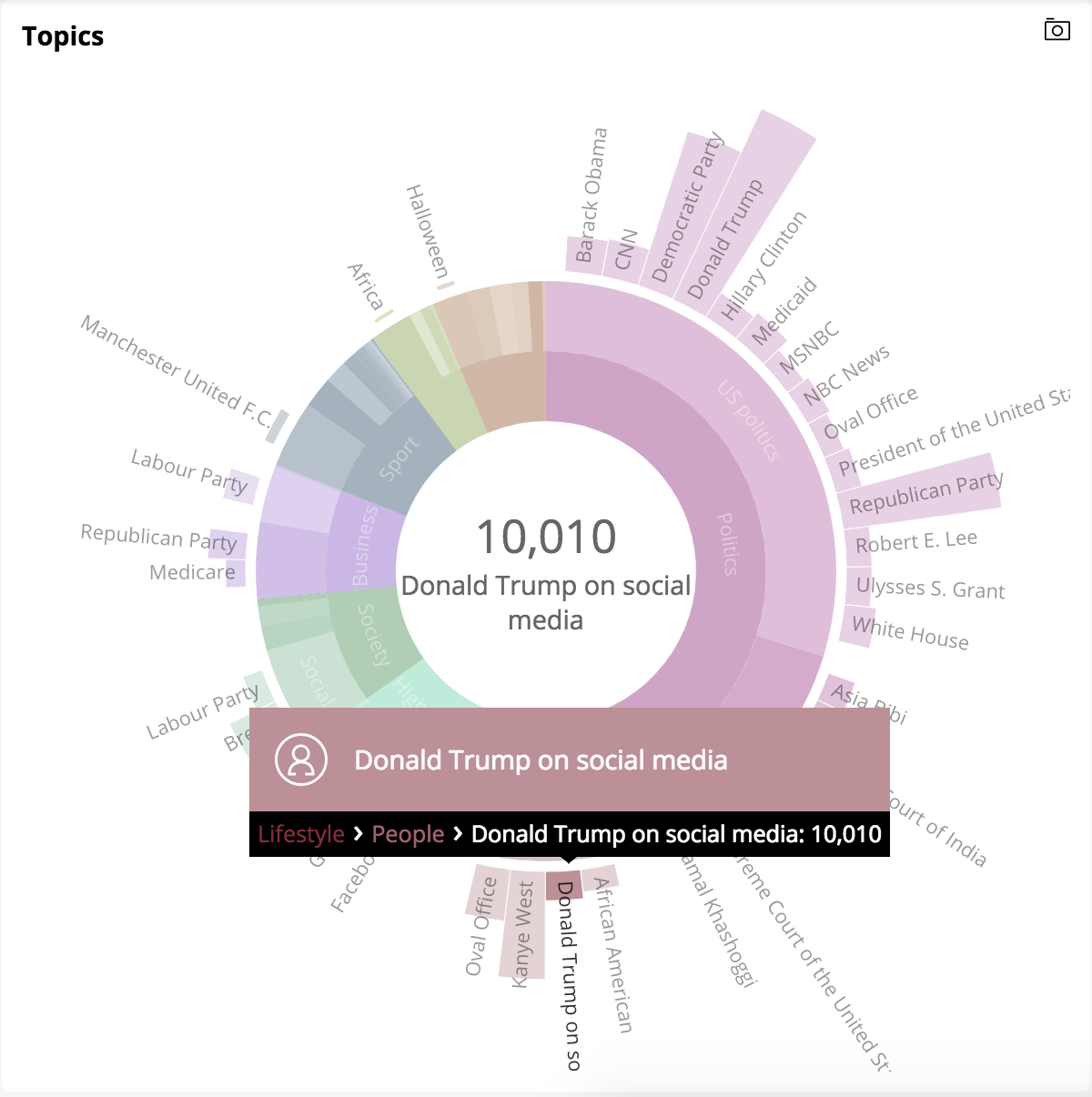 This tells us that “Donald Trump on social media” is indeed by itself a hot topic of discussion. (which is why we’re writing this article.)

As a point of reference, here are the results for positive tweets in the same 30-day period:

Source: Linkfluence Search - a sample of positive tweets in our database from Oct 10 - Nov 8 2018 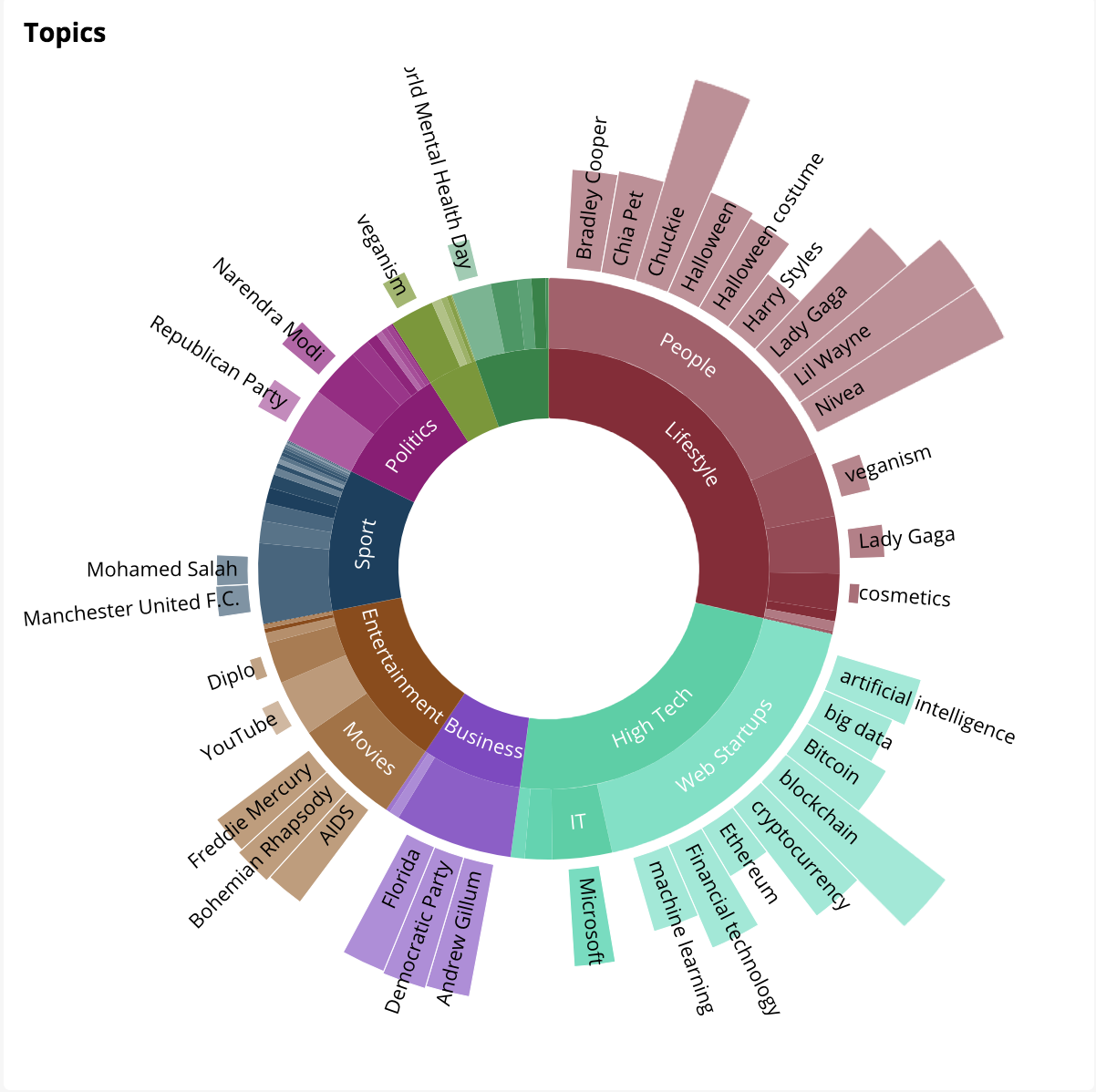 Source: Linkfluence Search - a sample of positive tweets in our database from Oct 10 - Nov 8 2018

Interestingly, positive posts are mostly driven by young people between 18-24. Most of the discussions are about Halloween (and Chuckie) and a lot of celebrities - including Queen’s lead singer, Freddie Mercury, and Bohemian Rhapsody, which is one of the best movies I’ve seen in a while.

But let’s get back to Trump - how is Trump’s Twitter presence changing the perception of the platform?

Social platforms like Twitter have tremendous potential in politics. They give anyone the ability to communicate directly with a broad audience, providing visibility independent of traditional media channels such as television, radio, or print media.

For media organizations, Twitter is a goldmine. Many news outlets, including CNN, MSNBC, and Fox each start the day with coverage and analysis of Trump’s early morning tweets. Even his more cryptic tweets (covfefe, anyone?) still get plenty of airtime. 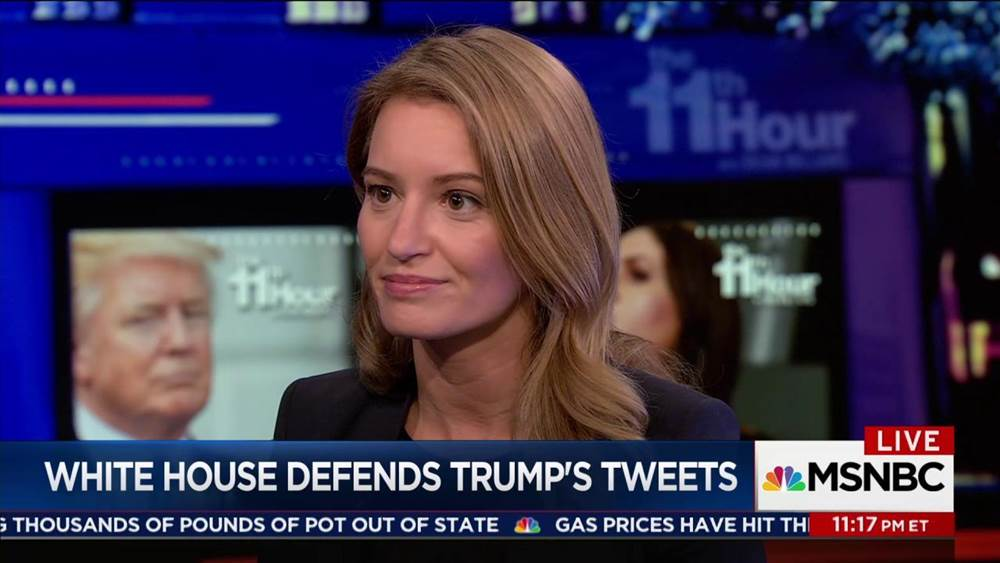 Throughout the news cycle, media outlets gather commentary from social media, often driving the day’s coverage from tweets alone. With 336 million users around the world and 67 million of them in the US alone, there’s always plenty of material to go around.

This is one major consequence of Trump’s avid use of Twitter. He has normalized media outlets in gathering information directly from social media, meaning what would once have been viewed as mere opinion is often rounded up to the status of fact.

And while we’re on the subject of facts...

The rise of misinformation

For a number of reasons, the Trump presidency has coincided with an increase in the deliberate spread of misinformation through social media channels, including via Twitter bots and fake accounts.

While this trend can’t be pinned on any one individual, Trump’s flexible relationship with the truth definitely doesn’t help. A Washington Post study found that he made 6,420 factual misstatements in 649 days, which is a green light for others to do the same.

This presents a huge challenge for social media platforms. Fortunately, Twitter is taking this issue seriously, and has taken aggressive measures to combat the spread of misinformation. This includes suspending 70 million suspected fake accounts over the May/June 2018 period.

Contributing to a toxic environment

Many commentators have charted the increasingly toxic behaviour of Twitter users in recent years. Even Twitter CEO Jack Dorsey has acknowledged the issue as being worthy of study.

Some have drawn a direct link between Trump’s behaviour and the emergence of a more hostile Twitter environment. While this relationship is difficult to pin down, it’s not hard to see how this behaviour might encourage some of his more passionate supporters to be hostile or negative.

The divisive and adversarial environment fostered by Trump and spread amongst some of his followers has major implications for Twitter.

Not only does this kind of environment run contrary to the sentiment behind Twitter’s creation, but it also inhibits the power of the platform in promoting democracy and positive social change.

Now we’ve examined the impact of the Trump presidency on the perception of Twitter, let’s take a look at some broader observations regarding Trump and social media.

Risk and reward: What the Trump era tells us about social media

Beyond influencing public perception of Twitter, the Trump presidency can tell us plenty about social media engagement for brands and businesses.

Whether intentional or not, social media platforms encourage users to become increasingly polarized.

Part of this is due to human nature, and part is due to a design which rewards retweets, meaning critical tweets often get more exposure than affirmative tweets.

Crooked Hillary Clinton is the worst (and biggest) loser of all time. She just can’t stop, which is so good for the Republican Party. Hillary, get on with your life and give it another try in three years!

This pattern is alive and well in Trump’s Twitter feed. His scathing messages often receive more coverage and attention than any others and are broadcasted to a wider range of people.

Twitter’s community guidelines do go some way to curbing this cycle of negativity. However, brands and businesses engaging with the public via Twitter should be aware of this trend and should have strategies in place to combat it.

As Trump’s Twitter feed demonstrates, as public figures and brands become increasingly active on social media, they expose themselves to volatile public engagements.

This can be a particular risk around major public events, for example, the 2018 midterm elections. As we’ve seen, there has been no shortage of divisive and confronting tweets in the lead up to November 6th, including from Trump himself.

Exposure to this kind of division and volatility is the natural downside of having an online presence. For every positive connection you make with a supportive audience, there will always be those out there waiting to criticize.

@muckrack We make tacos, not war.

However, when things go well on Twitter, there is far more to be gained by engaging customers than by staying away. As we’ve seen, platforms like Twitter encourage the free and honest sharing of information. By participating, brands can significantly boost their visibility.

Most importantly, it’s crucial for brands to stay on top of what consumers are talking about, even when such discussions can be negative or misinformed.

Businesses can also boost their chances of effective online engagements by communicating strategically and staying in touch with public opinion.

To effectively engage the public using platforms like Twitter, businesses need a detailed sense of public opinion and prevailing attitudes regarding their brands and industry, or any trending discussions. This helps anticipate reactions to particular advertising campaigns, promotions, or brand decisions.

Without this understanding, businesses can risk making embarrassing missteps which can haunt them for a very long time. For a case in point, look no further than Pepsi’s regrettable 2017 ad campaign with Kendall Jenner.

Kendall Jenner gives a Pepsi to a cop and rids the world of -isms. Y'all can go somewhere with this tone-deaf, shallow and over-produced ad. pic.twitter.com/CEr4cAw3Ld

As seen in the Linkfluence Search results discussed above, social media listening is a key part of developing this understanding.  Social listening gives brands a full and nuanced picture of the social media content landscape, with real-time big data.

However, given trends with polarization and misinformation, Trump’s particular brand of public engagement presents challenges for platforms such as Twitter and Facebook.

Similar to Twitter’s efforts to stamp out fake accounts, other social media companies must also take these issues seriously in order to preserve public trust.

As we’ve seen, engaging the public on platforms like Twitter can be of immense value for brands and businesses.

Companies should approach this public engagement in an informed, strategic way, with the benefit of the deep understanding available through social listening tools..

If you’re interested in the social listening search engine we used to generate the graphs above, request a demo here: