Linkfluence's Nominations: The Brand, the Speaker and the Influencer that left their mark on social media at #SMWLDN 2017 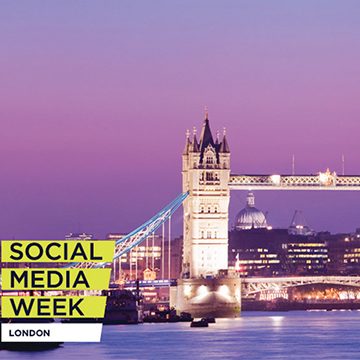 “This is not just about coming to the show, hearing someone speak, exchanging a bit of information, and then walking away. It’s really about starting a conversation.”, Social Media Week video.

Social Media Week, aka #SMW, one of the most prominent global social media conferences has once again visited London this September. The event gathered more than 1,000 social media professionals and 66 brands, including Facebook, National Geographic, Google, Pinterest, Twitter, BuzzFeed and Spredfast around the theme: “Language and the Machine” - how algorithms are shaping human language communication; data and analytics and visual storytelling.

One brand, one speaker and one influencer left their mark on this year’s #SMWLDN by contributing to its success on social and attracting particularly high engagement.

Who were they and how did they do it?

National Geographic, well-known for its social media savviness, with over 19.6M followers on its official Twitter alone, came first with mentions in 229 posts, scoring a total of 2.37M impressions and reaching an audience of over 193K people.

“We are explorers, ready for the next chapter”, said Nadine Heggie, the company’s VP of Global Partnerships. She also revealed that National Geographic’s brand success on social media, with tens of thousands of photos shared each day, followed a simple formula: “We take the community to drive our brand forward”.

At its talk, ‘Masters of Storytelling: How NatGeo Engages 350 Million Fans on Social’, Nadine’s colleague whom she partnered with, Stephen Alvarez, an award-winning National Geographic’s photographer, shared one of his photos with the audience, which was claimed to be the “the oldest selfie”.

Adrian Cockle, Hootsuite’s Industry Principal for EMEA, spoke about ‘Powering the human connection’. In his talk, he addressed the growing need for brands to prioritise human interactions as opposed to only pursuing technological innovation.

Don't favour #tech over people. Customers don't want to talk to brands. ???? @ade Thanks for cutting through the noise #HootSMW #SmwLDN pic.twitter.com/w1s79CnNY3

“Let’s build communities, not just products” called out Cockle in an attempt to portray social media as a dialogue and make a point about successful social media management. Cockle’s surefire recipe for social media would follow the rule: “Build your employees into your social strategy”.

Focusing on the other ends of the interaction, rather than just getting tied up by algorithms and data-driven decisions, is what, according to Cockle, defines the interplay between humanity and technology.

Cockle’s speech sparked a total of 67 posts using his direct handle @ade, reaching over 1.58M impressions and an audience of 126K 'humans'.

Emojis used in conversations around Cockle’s talk and their impressions. Powered by Linkfluence

#Hootsuite appeared in 49 posts, #hootsmw in 92, #Hootsuite_UK in 44, reaching a total of 2.9M impressions. Cockle’s speech reached the most impressions and audience among all 53 talks at the SMWLDN conference.

Paisley’s engaging content in the form of mood gifs posts, sharing both opinion and good humour around #SMWLDN resulted in 668K impressions and a 53.4K estimated audience reach, and granted him first place in the Social Media Week’s London 2017 influencers rank.

Things that Love Island brought to its audience... ?

Paisley’s  social media blueprint was in his excitement and creativity as seen in his posts. His blog on Social Media Week further depicted his favourite tweets throughout the event.

It’s Not Just About the Speakers. It’s About The Conversation

Each year, Social Media Week results in a raft of inspirational content being shared across social media channels, with Twitter being the focus of this.

This year’s conference in London reached more people on social media than the year before, whereby this achievement is not owed only to the speakers and their talks, but also to the conversations their storytelling provoked among the audience.

Thanks to our platform, we were able to recognise Social Media Week’s success by capturing and analysing social data and conversations throughout the event.

"...to be on social media, you need to do social listening. Social listening first. Strategy second." @WebCertain #SMWGlobalSocialStrategy

If you think Linkfluence’s social media intelligence solutions can help you gather actionable data insights to grow your business, please get in touch for a one-on-one consultation with one of our advisers.