Is flexitarianism just the taste du jour, or here to stay? 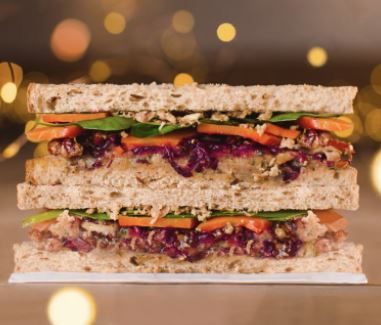 Walk into most supermarkets or lunch spots these days and you’ll be greeted by a variety of diet options, from vegetarian and vegan to gluten-free, alongside the traditional bacon sandwich. Our interest in nutrition is growing as we become more aware of our bodies, and on the impact our choices have on the world around us.

Today 35% of people in Britain say they are ‘semi-vegetarian’, and there was a 350% increase in British veganism between 2006 and 2016, largely driven by campaigns such as Meat-Free Mondays, launched in 2009 by the McCartneys. But it’s the flexitarians - the semi-vegetarians or the veggievores - that prove the most interesting.

Once upon a time these flexitarians could have been seen as half-hearted or scared to go ‘the whole hog’ as a veggie. Increasingly the media, though, is reporting on studies that illustrate how cutting down your meat consumption can have a number of health benefits, including reducing the risk of diabetes, cancer and heart disease. Elsewhere, as younger generations become increasingly interested in sustainability, the global environmental impact of agriculture is also taking up column inches - it’s been reported that the livestock sector could be responsible for as much as 51% of global greenhouse emissions.

Health and environment are driving factors

Earlier this year, The Independent newspaper ran a story by writer Emma Henderson, who self-identified as a ‘meat reducer’. Her argument was compelling: in the UK the average person eats around 84.2kg of meat per year, for a total of 5.5bn kilograms in this country alone; an estimated 2.2 million chickens are eaten per day in Britain, too. “That’s an awful lot of meat,” she writes, “and its production affects our carbon footprint – from the transportation of animals to the vast quantities of methane gas released by livestock and huge amounts of water required as well as the amount of land used for the process.” For the record, it takes 16,000L of water to produce 1kg of beef.

Suddenly, we can see why everyone is talking about flexitarianism, one of 2017’s biggest food trends.

Social conversation surrounding flexitarianism reached an annual high in October, up on 63% from January 2017; if you include re-tweets in this analysis, the peak occurs in June, when conversation was nearly triple that in January thanks to a particularly prolific tweeter. The October spike can be traced back to a thread on Mumsnet where users debated the term itself. Generally speaking, “flexitarianism” seems to be embraced by health and lifestyle accounts and influencers on Twitter and Instagram, but many consumers see the name as being pretentious - as one forum poster writes on The Student Room, “Flexitarian is ****ing stupid term, it is just people trying to be healthier”. 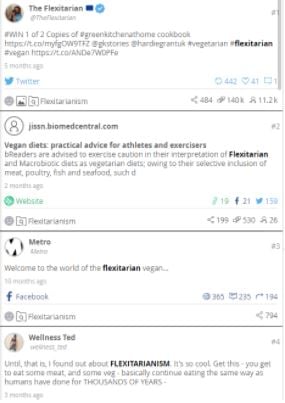 By way of reinforcing that poster’s message, roughly one-third of social posts approached flexitarianism from a healthy eating perspective, indicating their reasons for eating in this way were health and fitness related. A vegan diet was mentioned in 54% of conversations, but just 30% of vegan-related content is about health, so we could also infer that more people are concerned about the environment, sustainability and animal welfare.

Whatever the reasons behind the move, it’s something that brands are jumping onto. Those that include flexitarian choices on their menus include Pizza Express (vegan pizza), Pret A Manger (vegetarian and vegan options), and Wagamama (vegan choices). News of #VeggiePret stores opening delighted the veggies and the flexitarians of London. 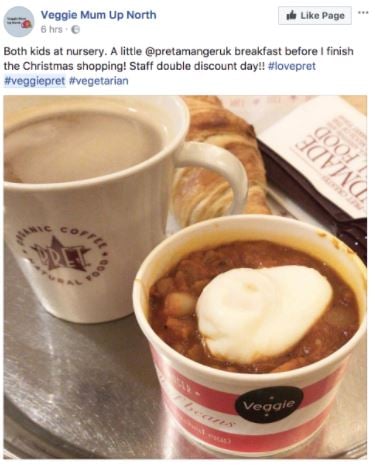 Although the term flexitarian was coined in the mid-1990s, it really came to the fore during 2017. It would be easy to ascribe the majority of this growth to the rise in health and wellness social media influencers - see the #eatclean trend on Instagram for proof - but we should not discount economics from the argument, with the price of meat rising substantially as cost of production grows and austerity continues to impact household budgets.

A YouGov poll earlier in 2017 found that 56% of Britons no longer see meat as essential to meals, while last year’s British Social Attitudes survey found just under one-third (29%) of people said they had reduced the amount of meat in their diet over the year. Indeed, meat substitute manufacturers Quorn have seen a large spike in sales - 19%, in fact - which they attribute to the boom in flexitarianism.

As for the diet itself? Dietitian Emer Delaney gave some advice to readers of the BBC’s Good Food Guide: “If you're thinking about changing to a flexitarian diet, I would advise plant-based foods at every meal, at least five portions of fruit and vegetables a day and wholegrain foods. It is a good idea to include alternative sources of iron that may be lacking due to a low intake of red meat. Good sources include low sugar, iron-fortified breakfast cereals and dark green, leafy vegetables such as spinach, cabbage, kale and broccoli. As vitamin C increases iron absorption, a small glass (150ml) of fruit juice or salad items like sweet peppers, lamb's lettuce and tomatoes with meals is recommended.”

Social insights can help give you a wider view of the market you operate in; find out how Linkfluence’s research and marketing intelligence can get you started.