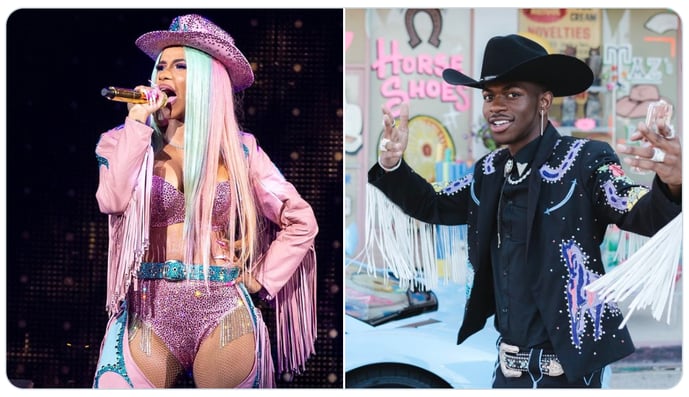 No, we’re not huge country-trap fans...we’re just curious marketers looking for the greatest strategies. Much like Ariana Grande's “Thankyou Next” viral sensation, we believe “Old Town Road” is the most prominent marketing case study of 2019.

In this blog post, we’ll analyse how one previously unknown Gen Zer harnessed the power of social media and penetrated several tribes to become a global internet star.

Old Town Road: how to engineer your own success

So what makes this number one so special? Perfectly and consistently marketed through a series of social strategies, Lil Nas X was the mastermind behind his own success. The twenty-year-old college dropout scoured the pages of BeatStars, a digital marketplace for producers, before coming across Young Kio’s beat for a mere $30. It samples a track by heavy metal group Nine Inch Nails, and was transformed into what's being described as a country-trap hit.

From a statistical point of view, this cross-genre hybrid was destined for greatness.  Country has held third position in the most played genres on US Radio, for three consecutive years. It’s also the fourth most popular genre of 2019 by total volume, including physical and digital album sales, and digital song sales. But there's more behind the numbers. Let’s break down his strategy.

Where does social come in? It turns out this digital native embodies all the traits of an entrepreneurial Gen Zer. For many years Hill had been churning out viral content to amass a strong, loyal following. He’s an avid tweeter, meme junkie and was controversially identified as a tweetdecker.

Much like Instagram Engagement pods, tweetdecking is a social media growth strategy. It’s the name for owner-led groups organizing mass-retweets; with the aim of increasing profile and brand popularity. It’s controversial because owners are often paid to push agendas. With a tech savvy knowledge of what it takes to go viral, Hill reached out to his existing fan base, and tweetdecks, to help propel his content.

Lil Nas X was also well known for his “scenario threads” on Twitter, choose-your-own adventures based on the threaded tweet format. The threads were captivating enough for YouTubers to play them in their vlogs and narrate the experience:

But wait... the plot thickens. In October, two months prior to the release of the song, the greatly anticipated western-themed survival game, Red Dead Redemption 2, was released. Fresh off the heels of RDR2 and its cultural success, Hill took his strategy to the next level. When he published “Old Town Road” to YouTube for the first time, low and behold, the entirety of the video footage had been taken from RDR2 gameplay. Simple, yet ingenious, the video surpassed 40 million views that can no doubt be credited to the tribes of RDR2. He tapped directly into lucrative audiences and gained traction.

He simultaneously released the independent track across multiple other platforms, Twitter, Apple Music, Soundcloud and Spotify with popular hashtags including #Country, #HickHop and #RedDeadRedemption2.

During this time, an existing trend was taking place known as the Black Yee Haw Agenda. It can be described as a visual aesthetic that was recently imitated by black artists like Cardi B and Solange, where clear cowboy influences are found in their clothing and video imagery. The fashion industry picked up on it, and you can guess that Hill did too. Returning to what he does best, Hill went onto curate his on-trend, aesthetic masterpiece using meme marketing across several social platforms.

But perhaps the most pivotal of choices, was social app of the moment TikTok. Spreading like wildfire, the #YeeHawChallenge took on a mind of its own to become a global viral sensation.

By March, Hill’s social assault caught the attention of major record labels and he was signed by Columbia Records after being contacted through Instagram.

I WOULDNT BE HERE WITHOUT TWITTER! THANK YALL! pic.twitter.com/24jLWm2Xvc

He even turned to popular global forum Reddit, albeit anonymously, asking users to verify the title of the song in order to get the post trending; a real one-man marketing machine.

At this point, the song simultaneously achieved success on the Billboard Country and Billboard 100 Charts before shorty after... controversy struck. “Old Town Road” was removed from the Country Chart for “not embracing enough elements of today’s country music to chart in its current version.”

5. Grabbing the attention of industry influencers

Social media erupted in disagreement, in-turn boosting the song's visibility. The scandal was considered by many as “whitewashing” the Country industry of black artists. Instead, it inadvertently generated such a buzz on social, that it reached cable television news having already garnered the support of celebrities and sports stars.

Luckily, one of these celebrities was just the man Lil Nas X was searching for.

Earlier in December, he was seen requesting the help of his Twitter tribes; asking them to produce a buzz loud enough to grab the attention of country hit legend, Billy Ray Cyrus. This cross-genre strategy allowed Lil Nas X to re-enter the country charts and grow an even wider audience of supporters.

twitter please help me get billy ray cyrus on this pic.twitter.com/UDoeiOZqc1

@lilnasx Been watching everything going on with OTR. When I got thrown off the charts, Waylon Jennings said to me “Take this as a compliment” means you’re doing something great! Only Outlaws are outlawed. Welcome to the club!

6. Remixes to stay relevant and include international audiences

Finally, on April 5th, Lil Nas X and Billy Ray Cyrus released their collaboration in what is now the longest-running number one on the Billboard 100.

In total there have been five perfectly engineered versions of "Old Town Road" of which four were created with Columbia Records. The idea was to release various versions of the song to attract wider audiences and stay relevant by continuing to dominate Radio play. And more importantly, all the versions are counted by Billboard as the same song. The more content the better! The "Seoul Town Road" version even features a member of Korea’s best selling K-Pop artists BTS, who are also known at the world's biggest boyband, to include Asian audiences. Hill's latest collaboration pursuit is previous Billboard 100 record breaker Mariah Carey.

Create your viral hit with these GenZ marketing hacks

Lil Nas X fully embraced the entrepreneurial traits of a Gen Zer and understood his audiences before even creating “Old Town Road”.

He targeted specific content to each social media platform simultaneously, while also producing content as short and as engaging as possible, to satisfy decreasing attention spans.

Above all, Hill has never allowed the momentum to die. To this day his Twitter feed engages and A/B tests with his audience, allowing them to have an input in his songs and album art. He authentically promotes his product in a process that has taken years to cultivate, using a deep understanding of the culture and technology of his generation.

He reinforces Gen Z's need for authenticity and has promoted his product in a process that no advertising agency could replicate.

And better still, each time “Old Town Road” was referenced, he was the first to re-post and benefit from free marketing. Beginning to end, this song and its success will go down in history as a product of the internet.

The entertainment industry, brands, and marketers alike will struggle to replicate the relentless strategies of this Gen Zer. But the key take away is engaging individual tribes and audiences authentically to produce long term results. The question is, how long will audiences keep listening?