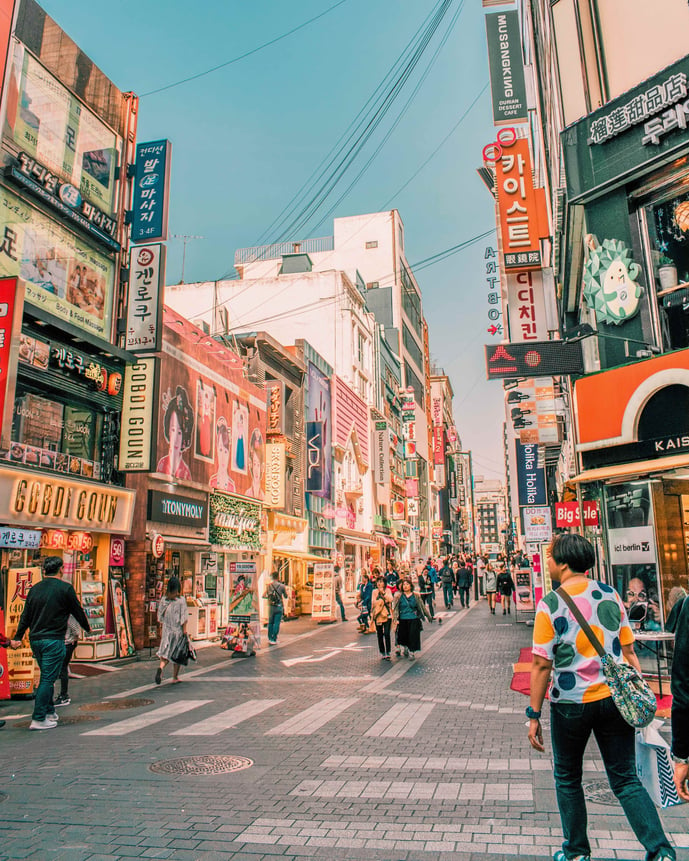 For most of us, life revolves around a few major tech companies. It’s nearly impossible to spend a week without Google these days, and many social networks are the same story.

In fact, chances are you found this article through Google, Facebook, or LinkedIn. Unless you’re reading this from South Korea.

Because unlike most countries in the world, where Google, Apple, Facebook and Amazon reign supreme, Koreans have developed their own digital economy giants.

So what are the main social media platforms? And do Koreans really prefer them over their western counterparts? This article explores these questions in details.

To understand Korean social media usage, let’s begin with the technological landscape. The Internet has reached more than 95% of the country, the highest rate for any Asian country outside the Middle East.

As the home of electronics giants Samsung and LG, it shouldn’t surprise us to learn that the country is number one in the world for smartphone ownership. And as long as smartphone users have a web connection, they’re probably on social media.

Good news on that front, too. South Korea also has one of the highest rates of LTE coverage in the world. 4G networks are available essentially anywhere in the country. Whether you’re on the subway, in the middle of the countryside, or on board a high-speed train, it’s always possible to connect to social media.

Most South Koreans already use 4G, and have done for years. But the country’s top three service providers rolled out 5G access in April 2019, and speeds are up to 100x faster than 4G. 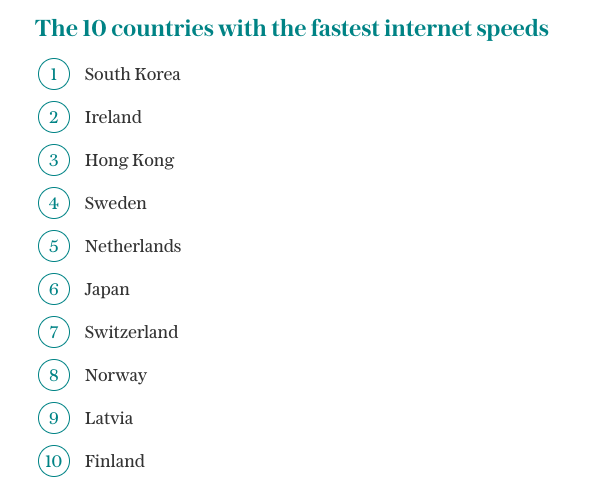 Coupled together, these are ideal conditions for social media users.

A nation of intense social network use

As a country with such good Internet infrastructure, we’d expect to see social media use at incredibly high levels. Which is exactly the case.

As of January 2019, South Korea had the third highest rate of active social media users in the world. (Interestingly, the top six countries are all in Asia).

But as we’re about to examine, the Korean social media landscape is a little more complicated than westerners might expect. All your favorite social networks are present in the country, and many are thriving.

But South Korea has its own set of platforms that have proven equally or more popular over the last two decades.

As we’ve already teased, South Korea is home to several social networks that many readers won’t recognize. Some look similar, of course, and many features were developed as a way to stay ahead of interlopers. Here are the big names in Korean social media: 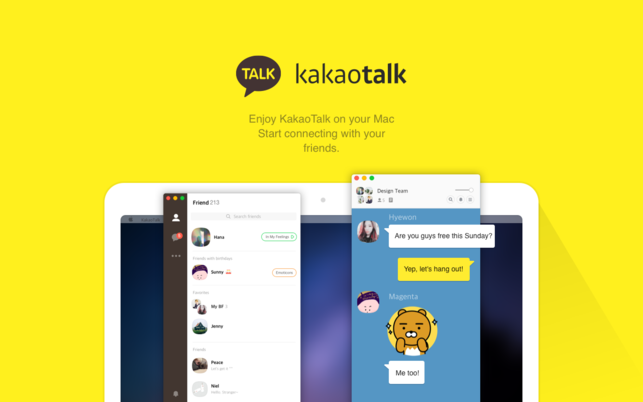 The Daum/KakaoTalk universe, a merger of two major Korean digital service providers, has managed to carve out a sizeable chunk in the market. According to StatCounter, Daum is the 3rd biggest search engine in South Korea with a market share of approximately 6.5% (behind Google and Naver, with market share rates of approximately 66% and 25%, respectively).

KakaoTalk, on the other hand, is a WhatsApp-style messaging service, which is actively used by 97% of all smartphone users in Korea and serves more than 43 million monthly active users.

KakaoStory, with its plethora of services, is the equivalent of Facebook. Launched in 2012 by Kakao Corp, it was the most popular network among Koreans. Its popularity is particularly impressive given the prominence of similar tools like WhatsApp and WeChat.

Like the Chinese WeChat, Kakao has since engaged in a diversification strategy, for example offering online banking and taxi services. Kakao users are also able to send each other gifts.

For instance, a Kakao user can easily buy his friend a pizza by sending a bar code to his account, which then can be redeemed online or in store.

KakaoTalk continues to be hugely popular in South Korea, despite the intrusions of other powerful social networks. But as we’ll explore shortly, this may not last. 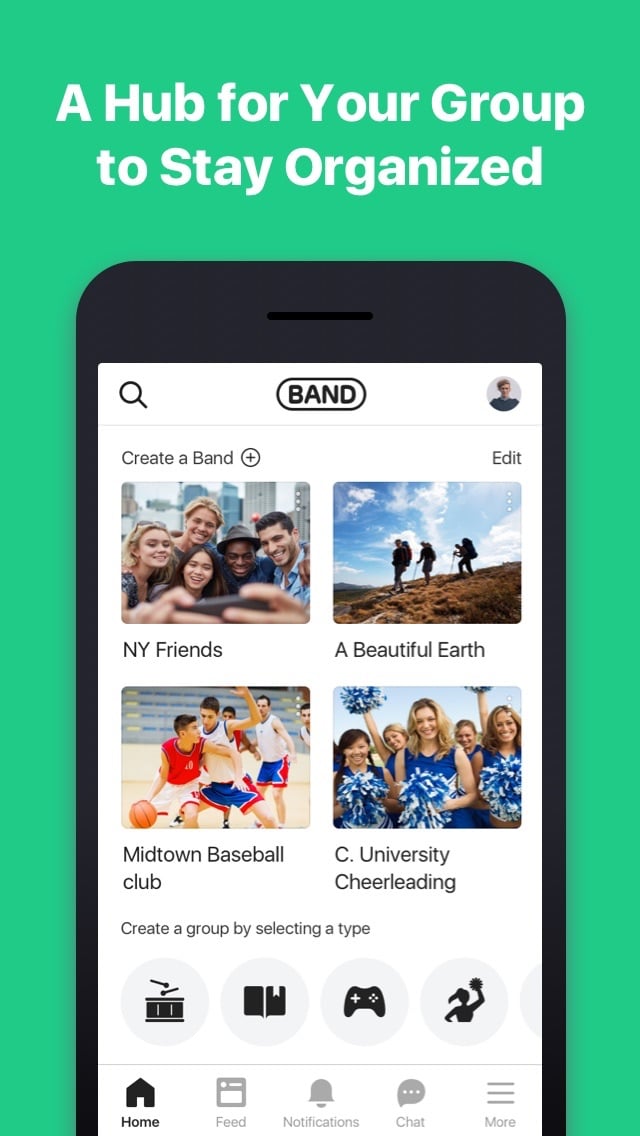 Naver is basically the Google of South Korea. Of course, South Korea has Google as well, but Naver operates in much the same way.

The company has a range of different search engines (Blog Search, News Search), Knowledge In (similar to Yahoo Answers), as well as popular products Naver Cafe, LINE, and BAND.

BAND is a communication app for teams and groups. In the US, it’s marketed as more of a business tool - similar to Slack: 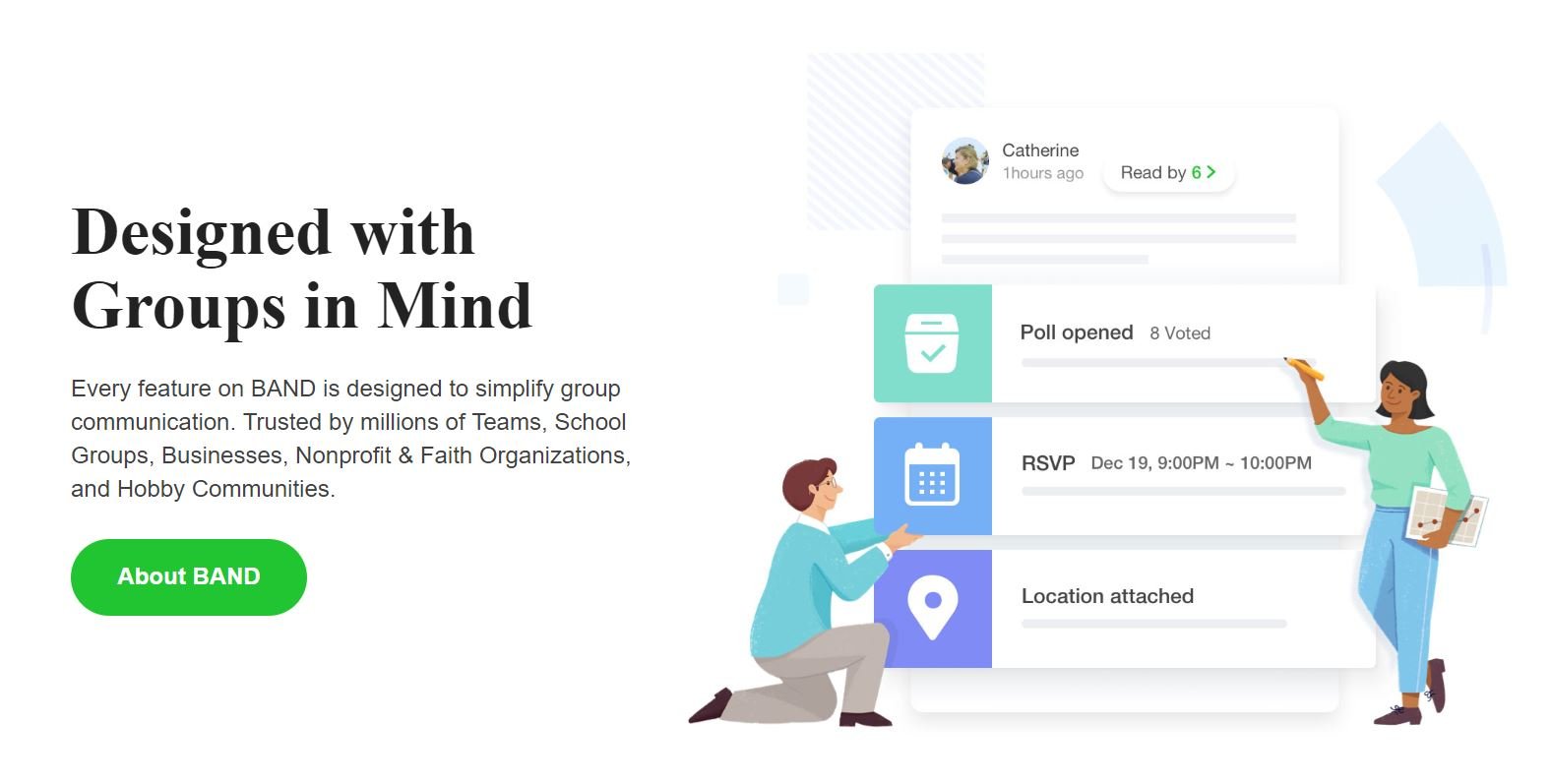 But it really became popular in South Korea through the gaming community. When users played online in teams, they needed an easy way to talk to one another. BAND made this easy.

It’s even officially used by the Republic of Korea Army.

It’s to Cyworld that Koreans owe their enthusiasm for social networks. Cyworld created the first major social network back in 1999, well before Facebook or Twitter, and it rapidly became a hit.

One unique feature is that it allows its users to organise, manage and prioritise their relationships according to a hierarchy consisting of three different ‘ranks’, thus matching the structure of Korean society.

For a long time, the company resisted the inexorable rise of Facebook. But eventually Cyworld recently experienced a sharp decline in use: 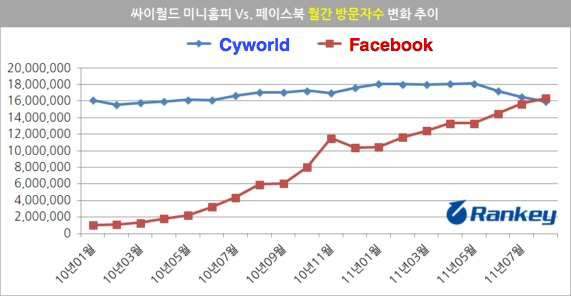 Number of Cyworld vs Facebook users. Source: The Realtime Report

The other networks, however, are still going strong. And as of very recently, they were holding off the outside invaders.

It wasn’t long ago that the Korean social landscape was dominated by domestic companies. But just as it has done in most of the world, Facebook has climbed to the top spot.

Note: YouTube actually has usage rates even higher than Facebook’s, but this is not what most people think of when they picture a “social network.”

The statistics on social media usage can be confusing

It should be noted that the numbers aren’t exactly clear on all this. Based on one survey, BAND actually has the highest number of active users.

But really, what’s most interesting is how popular these networks are in the first place. Compared with their American and Chinese counterparts, their overall usage is tiny.

But as a percentage of the South Korean market, each punches well above its weight.

Aside from the fact that Facebook is simply everywhere today, demographics seem to have a large part to play in this pattern. There’s an interesting difference in social media usage depending on age.

Facebook is enormously popular with Koreans under 24 years-old. These young people spend 29-34% of their social media time on the network (depending on their age), far more than any other platform.

The same group of youngsters also uses Instagram heavily - it’s the second-most popular network among them.

Facebook is also the most popular option for users in their late 20s and 30s. But they also spend a relatively even share of time on other networks, including locally-built offerings.

By contrast, Koreans in their 40s and 50s heavily favor two options: Kakaotalk and BAND. This could be because they were already using them, or perhaps older Koreans prefer Korean-made products.

A battle of East vs. West?

Overall, these changes could suggest that domestic Korean social networks are in trouble. As more young people get their first smartphone and create new social profiles, they’re likely to join their peers on Instagram and Facebook.

On the other hand, it might mean that some social networks are simply better suited to certain demographics. BAND, in particular, seems to appeal directly to users who need slightly more professional elements. It includes a shared calendar, lets users create polls, and has an inherent organization that likely fits older users.

Most likely, it shows the slow creep of companies like Facebook (and Instagram) across the entire world. Even in a country that already had a thriving social networking culture, it was only a matter of time.