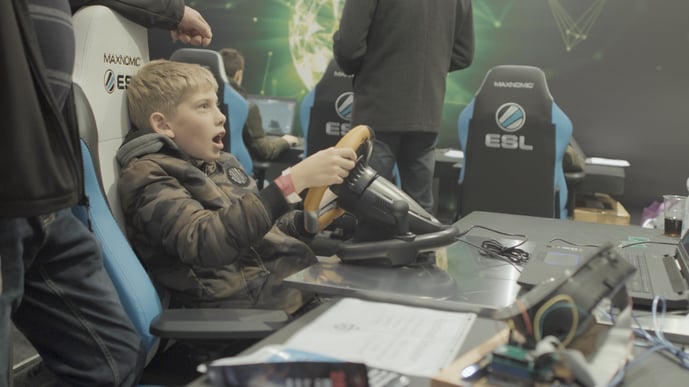 Video games are fun. I don’t think there’s much debate about that one (except maybe with the older generations who didn’t grow up with game consoles).

From the millions of people playing world-building games like Minecraft, through to the smash-hit cultural phenomenon that is Fortnite, there’s no denying the world’s obsession with video games.

But how fun are video games when you’re not actually playing? What about being on the sidelines instead, watching someone else play?

Now, technological advances are making video games a lot more captivating to watch as a spectator sport. In recent years, sites like Twitch have fueled the rise of gaming content as a popular streaming medium alongside TV, film, and music content.

In this article, we’ll take an in-depth look at the rise of eSports, who’s behind it, and look at some of the recent investments, technology, and other trends within this growing market.

Let’s get started with some basics: what is eSports?

What is eSports, exactly?

‘Electronic sports’, or simply ‘eSports’, is essentially professional gaming - where pro video game players take part in competitions for an audience of spectators. Typically, these are multiplayer games like Call of Duty and Fifa, though there are plenty of single-player eSports games, too.

Professional eSports competitions are live-streamed through platforms like Twitch or YouTube, with dedicated fans subscribing to team or player channels for regular updates. Recently, Facebook has also launched its own video game streaming hub, Facebook.gg.

Hosting eSports can mean huge business for streaming platforms. This helps explain why major technology players are investing in the area, from Amazon’s $1 billion buyout of Twitch in 2014 to YouTube’s 2017 partnership with the eSports Championship Series.

These developments show the gradual movement of eSports into the mainstream. In fact, Business Insider reports that a third of U.S. consumers now watch eSports at least once a week, with the number rising to 44% for Gen Z consumers aged between 14 and 21.

This growing popularity has helped drive some major earnings. Forbes reported the eSports market as having generated almost a billion US dollars in revenue for the 2018 calendar year, representing an amazing 38% growth over 2017.

Now, let’s take a closer look at some of the online buzz around eSports.

Some major online trends in eSports

We wanted to take a closer look at the buzz eSports is generating online, and find a window into the most vocal eSports fans. To do this, we used Linkfluence Search, a social listening tool helping businesses to discover market trends and insights.

According to Linkfluence Search, the term ‘eSports’ has been mentioned in over two million social and web content posts in the last twelve months. That’s a lot of chatter!

Here are some of the interesting eSport market trends we found with relation to demographics, investors, and technology.

From looking at the chart above, it’s evident that the vast majority of online posts and interactions come from males (84%). This imbalance may reflect the lack of professional female gamers in the industry. Although there are a lot of female gamers out there, women make up a scant portion of the professional eSports player pool.

In fact, Bloomberg has reported issues of toxic behavior and other barriers which make it harder for women to participate in eSports. Fortunately, major figures within the industry are now talking about potential solutions to these issues.

When it comes to the ages of those mentioning eSports online, we found the term ‘eSports’ is used mostly by young adults between the ages of 18 and 24. It’s surprising to see less usage of the term from those between 13 and 17, but it’s likely these fans are using a different set of vocabulary to talk about their favorite games and players.

Another surprise is the fact that almost 30% of posts mentioning the term came from the 45 to 64 age range. However, when looking a little deeper, it became apparent that these are coming from analysts and technology consultants, not necessarily eSports fans themselves.

So, that’s a little about who’s discussing eSports online. But what about eSports investors? Who’s opening their wallets to get in on the action?

The numbers don’t lie. After all, eSports revenue is expected to reach a staggering $1.65 billion U.S. dollars by 2021, with most of the business likely coming from North America, China, and South Korea.

Esports revenues will grow 38% this year to $906M and reach $1.65B by 2021—with most of the business likely coming from North America and Chinahttps://t.co/Tmwp8XQD6R pic.twitter.com/3clO5SIWj0

According to Newzoo, sponsorship is the biggest eSports revenue stream ($359 million in 2019), followed by advertising ($174 million), media rights ($161 million), game publishing fees ($116 million), as well as merchandise and tickets ($96 million).

And this interest in eSports isn’t just being driven by large tech companies: traditional sports franchises are getting in on the action too. Even educational bodies and organizations are starting to pay attention.

This investment isn’t just a recent thing, either. For example, Intel has been involved with eSports for nearly two decades through their work with ESL, formerly known as the Electronic Sports League.

Over the last year, we’ve seen Globe Telecom team up with Riot Games, Garena, and Mineski in a strategic eSports partnership. Also, around this time last year, one of the biggest eSports crews, Team Liquid, partnered with multinational software corporation SAP.

Other big technology and telecoms companies actively supporting eSports include Acer, Tencent, and as we can see in the tweet below, Nokia.

Now, traditional sports such as Formula 1, football and basketball all have players and associations actively promoting eSports tournaments, helping to drive the credibility and visibility of eSports into the mainstream sporting culture.

Celebrity eSports endorsements are even coming from the likes of Neymar Jr., Mesut Ozil, and Michael Jordan, who is leading a major funding round for the eSports group aXiomatic.

Michael Jordan is leading a $26 million round of funding for the ownership group aXiomatic. For Jordan and new co-investor Declaration Capital — the family office investing the personal wealth of David Rubenstein, who co-founded and serves as co-executive chairman of the multi-billion-dollar private equity firm, The Carlyle Group — investing in esports looks like a slam dunk. As owners of the TeamLiquid esports franchise, which Forbes estimates as the second most valuable gaming team in the industry, aXiomatic has a solid base in the budding world of esports — an increasingly lucrative market. Jordan or LeBron? #stocks #success #bitcoin #stockmarket #nasdaq #forex #trader #millions #billions #cryptocurrency #network #daytrader #business #entrepreneur #motivation #quote #amazon #wealth #inspiration #blockchain #investing #money #lifestyle #daytrading #economy #trump #education #finance #wallstreet #nyse

This widespread level of interest has also led to school-sponsored eSports leagues sprouting up across the US, an initiative driven by the National Association of Collegiate eSports. There's even a University in Ohio offering scholarships to top Fortnite players.

Given all this interest, it’s inevitable that the technology behind eSports will continue to improve. Let’s take a look at what people are saying about eSports technology online.

Technology - what’s happening next with eSports?

eSports fans are typically interested in tech. Unsurprisingly, we found a huge amount of technology discussion from eSports fans online.

There’s a lot of talk around graphics and processing units in gaming and the eSports topic wheel reflects these same technology trends, with various leading GPU brands featuring in the most searched for terms.

Given Intel provide computer processing for all of ESL’s events with its Core i9 Processor and Xeon processor, as well as trial technologies like 5G, it’s natural to see these driving a lot of the online discussion. There are also more specific terms relating to computing - as well as gaming equipment - reflected in the most popular topics for discussion.

“Oculus is committed to fostering long-term growth of the VR eSports ecosystem, and Season 2 - with its new format and additional games - is an amazing next step on this exciting journey,” says Oculus’s Head of eSports Christopher K. McKelvy.

Unfortunately, it’s not all fun and games when it comes to eSports. Players and spectators also have to deal with the threat of bad actors online.

The ongoing threat of cyber attacks

One problem which continues to plague the gaming industry is the threat of cyber attacks and hacking. This has led to a growing awareness over the last year about security, and how to protect eSports events from these kinds of deliberate disturbances.

Game-makers have had a field day making examples out of cheaters. Most recently, a pair of Overwatch hackers were charged in South Korea as a result of a year-long investigation by the region's police.

Elsewhere, in China, authorities recently arrested some fifteen game hackers, collectively fining them over $4.5 million U.S. dollars for their role in developing and selling cheats to the game PlayerUnknown's Battlegrounds.

However, the threat of hacking is unlikely to dampen the growing interest in eSports from around the world.

eSports is growing and it’s here to stay

Leaseweb is excited to be part of the growing eSports industry, working closely with various gaming, entertainment and technology companies.

We’re also proud to support our customer ESL Benelux, who organize some of the largest eSports events in Europe by providing them with our Dedicated Servers.

With these recent developments in mind, it’s safe to conclude eSports is here to stay, and will only get bigger and better with the investment it’s getting from educational organizations, sporting bodies, and tech firms.

Don’t be surprised if you even see it in the Olympics one day. After all, it has already been made a demonstration sport in the Asian Games!

For a closer look at the ways major brands and celebrities are backing the eSports industry, be sure to check back in with the Linkfluence blog.

Social data included in this article is from Linkfluence Search. If you're interested in analyzing social conversations around your industry or brand, book a free demo: