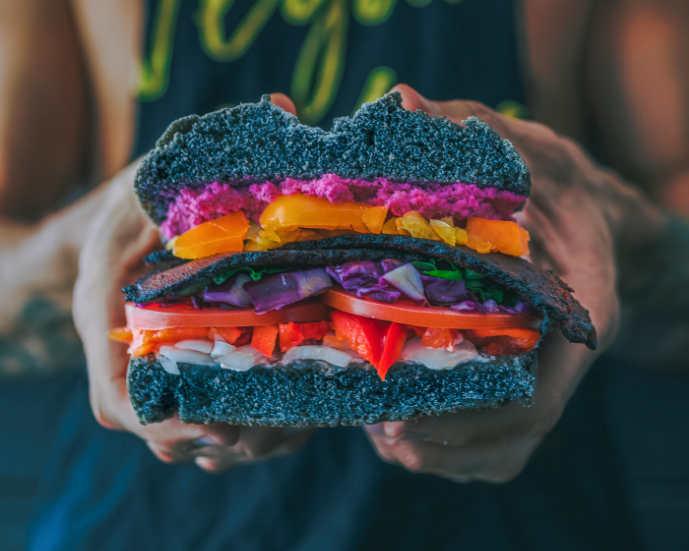 If you feel like veganism is getting more airtime lately, that’s because it is. The no-meat, no-dairy regime is now a household name.

Natalie Portman is vegan. Ellen Degeneres is vegan. So is Madonna, and Jay-Z and Beyoncé once tried it for three weeks.

There’s little doubt that veganism is increasing in popularity. And, just like many social movements in history, brands are looking for ways to meet the trend head-on.

In this post, we’re going to look at what might have caused this rise in vegan coverage online, and especially at its prominence on social media. Plus, we’ll talk about what marketers can learn from these social media trends.

To begin, let’s see just how large this rise has been.

Prefer watching over reading? We’ve done a webinar on this exact topic. Watch on demand here.

The vegans are taking over

What was once a fringe movement has become so mainstream that big brands have been forced to create new products. Of course, companies have always been eager to jump on new trends. But unlike other recent food movements, veganism isn’t seen as just a passing fad.

Major chains like Pizza Hut and Pret A Manger have introduced vegan offerings. And perhaps even more surprising, McDonald’s has been trialing the “McVegan” in Scandinavia: 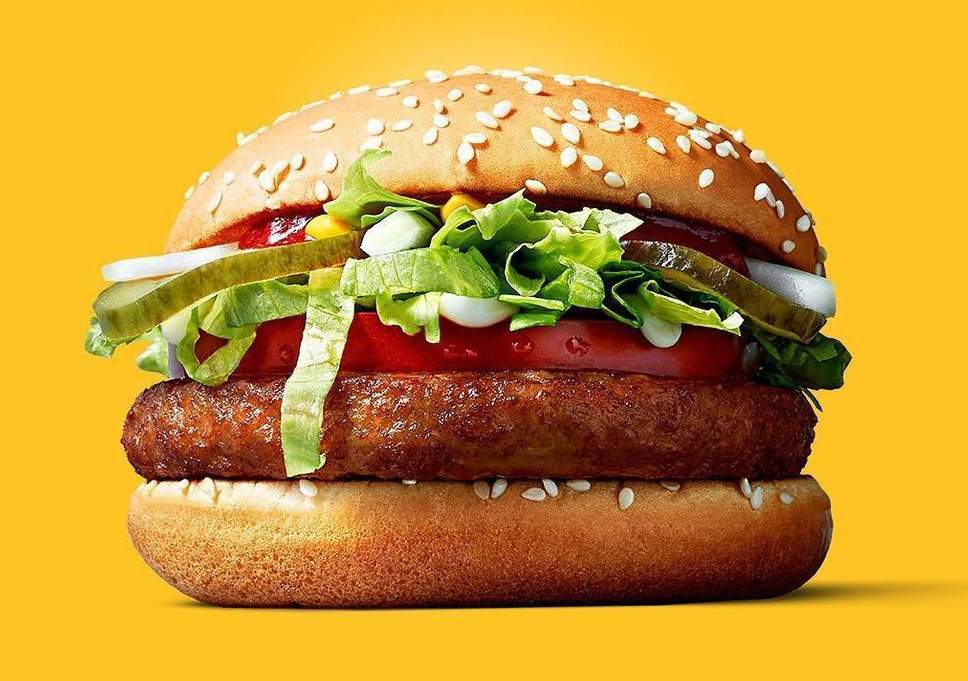 This is all in response to clear growth in plant-based eating habits. The number of people who describe themselves as vegan has reportedly risen 350 percent in the UK in the last decade, and 600 percent in the US in just three years!

A vegan diet is fast gaining acceptance. The Guardian stated that 2018 “is the year of mainstream veganism, as every trend forecaster and market analyst seems to agree.” Vegetarianism is rising too, and buyers in virtually every country are looking for ways to cut back on meat consumption.

But maybe because it’s more hardcore, “vegan” is what’s trendy, not vegetarian. Even if both are gaining steam, Google search volume has gone sharply up for one movement, and not the other: 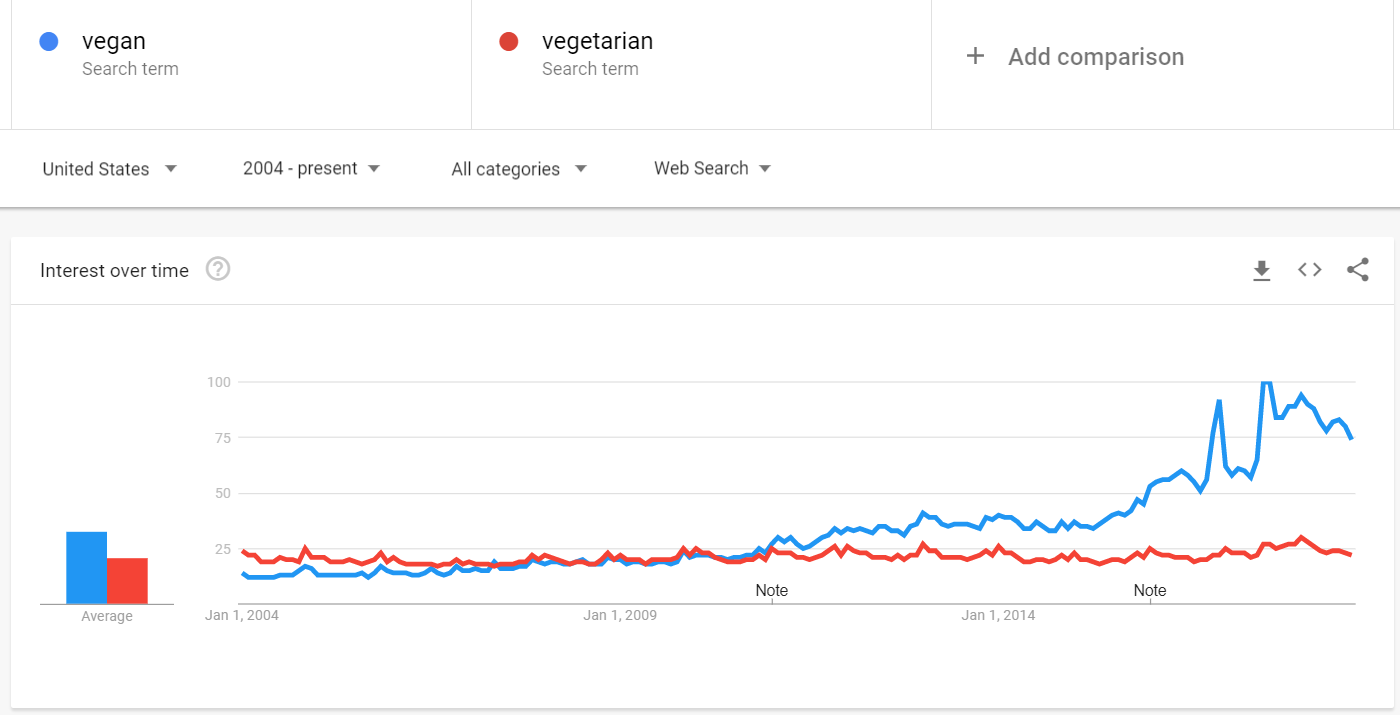 This doesn’t mean that vegetarianism is losing popularity - there are more vegetarians now than ever. But as a social movement, it hasn’t captured the same level of conversation as its plant-based sibling.

So what makes veganism different? Why would one idea be chocolate, while the other is vanilla?

Our social data researchers did some digging and found a few key characteristics to help us better understand veganism’s growth:

By analyzing one year’s worth of conversations around “veganism” and “plant-based diet,” we found that there are three main communities that drive the vegan movement on social media:

These three communities represent the reasons or drivers for the rise of vegansim: 1) self-care and well-being, 2) health and fitness, and 3) animal welfare and sustainability.

These categories are reflected in the top hashtags around vegan conversations as well: 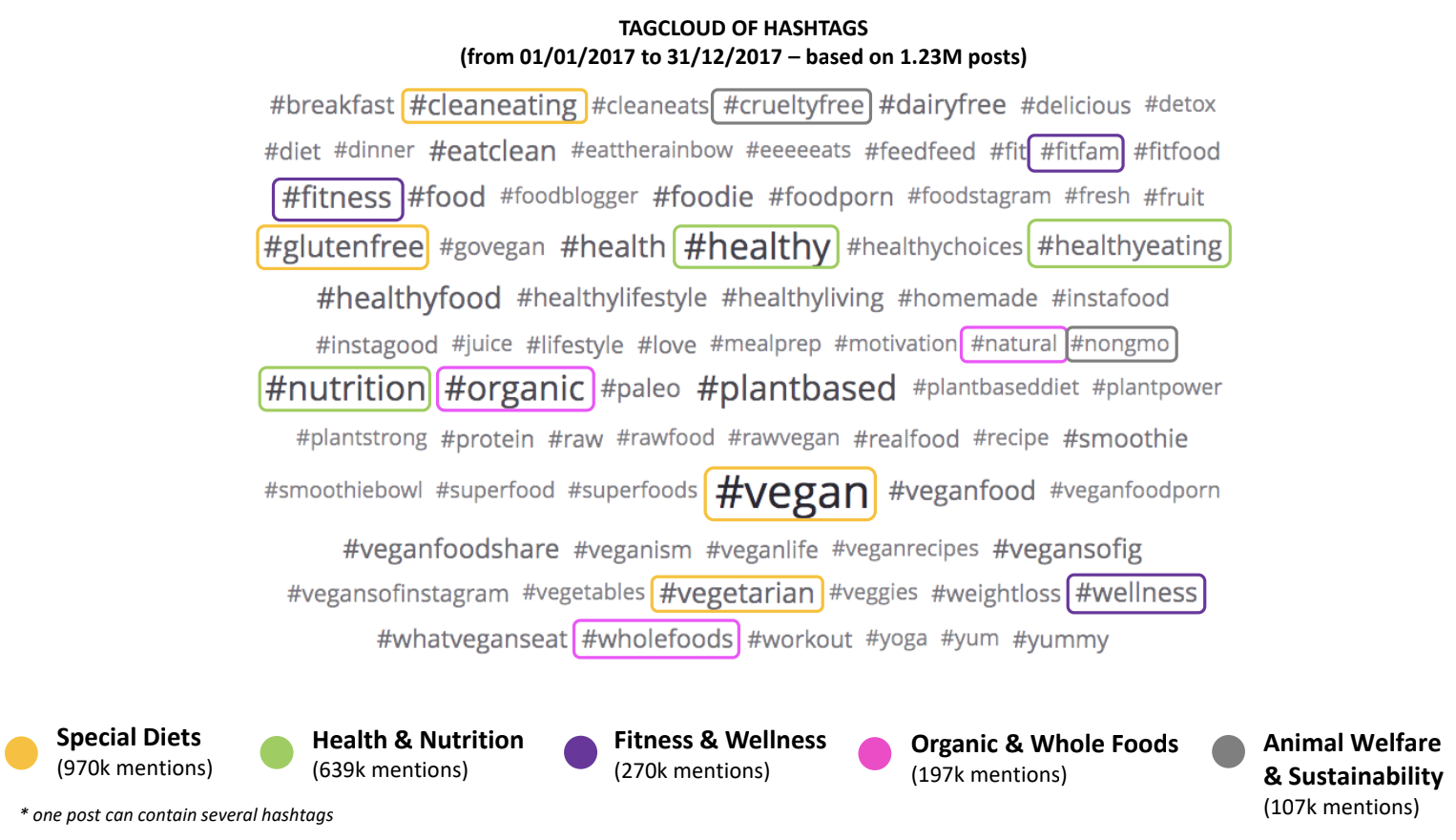 Why veganism is growing on social media

There are countless reasons why veganism might be trending. And we can’t pin the rise of any movement solely on a few factors.

But after some thorough social data research analysis, here’s our take on the main reasons behind veganism’s explosive growth:

The vegan movement is controversial

Although the vegan movement is mainly driven by health and environment conscious advocates, not all social conversations around the topic are positive. A lot of people are skeptical about the benefits and impact of the diet, and advocate against it.

In fact, a large portion of online buzz is generated by naysayers: 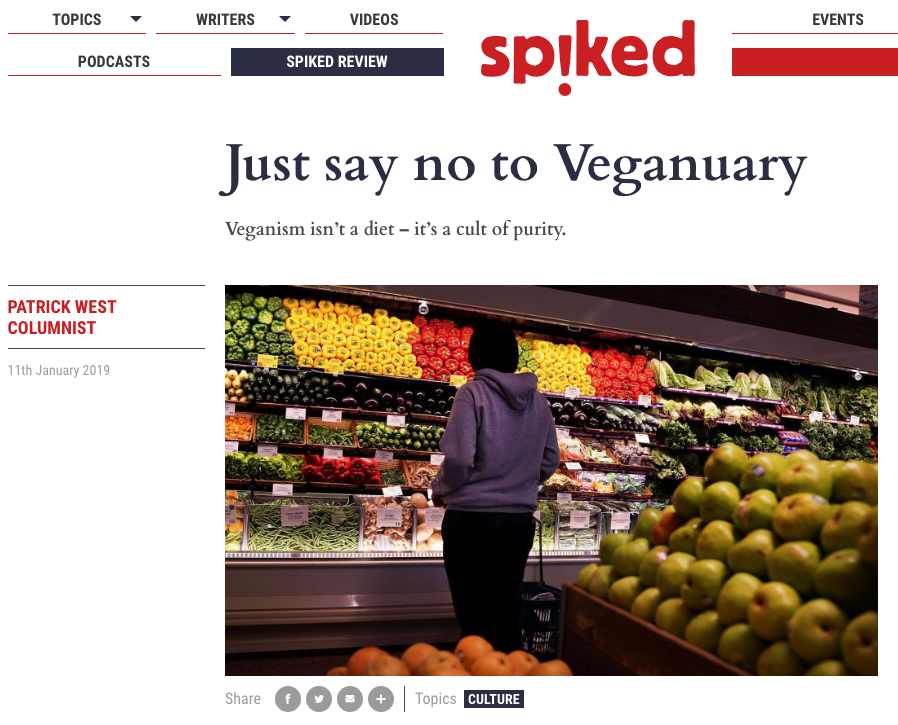 Controversies, myths, and conspiracy theories fuel heated online discussions as both sides passionately defend their stance with arguments and "proof": 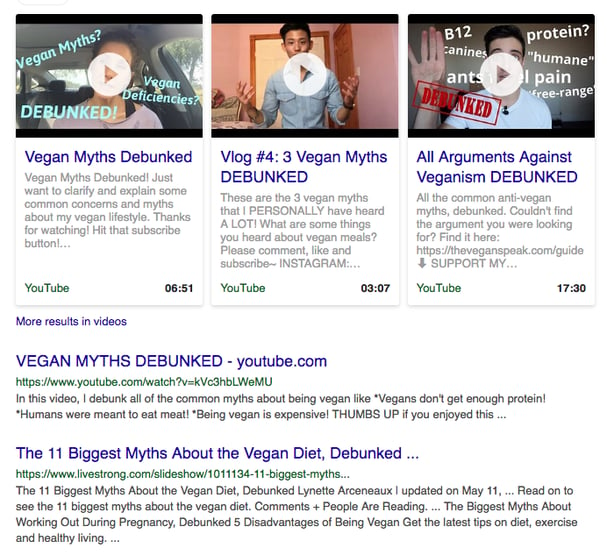 As this controversial topic touches upon health, environmental, social, economic, and political aspects of many people's (and animals') lives, debates over whether veganism is good or bad abound on the internet.

The vegan movement is led by young people

Advertisers have always coveted the 18-34 age demographic. This group has money to spend, and hasn’t yet settled into firm shopping habits. In other words, we can win these people over.

So any trend that favors this demographic needs to be taken seriously. And veganism is one such shift.

Citing a 2017 study, Forbes argues that “the shift toward plant-based foods is being driven by millennials.” Younger consumers are more likely to care about animal welfare, the environment, and supply chains when purchasing food.

A different, Canadian study found that more than half of vegans in the country are under age 35.

To better understand this prized market segment, our team looked at the most important values for millennials on social media: 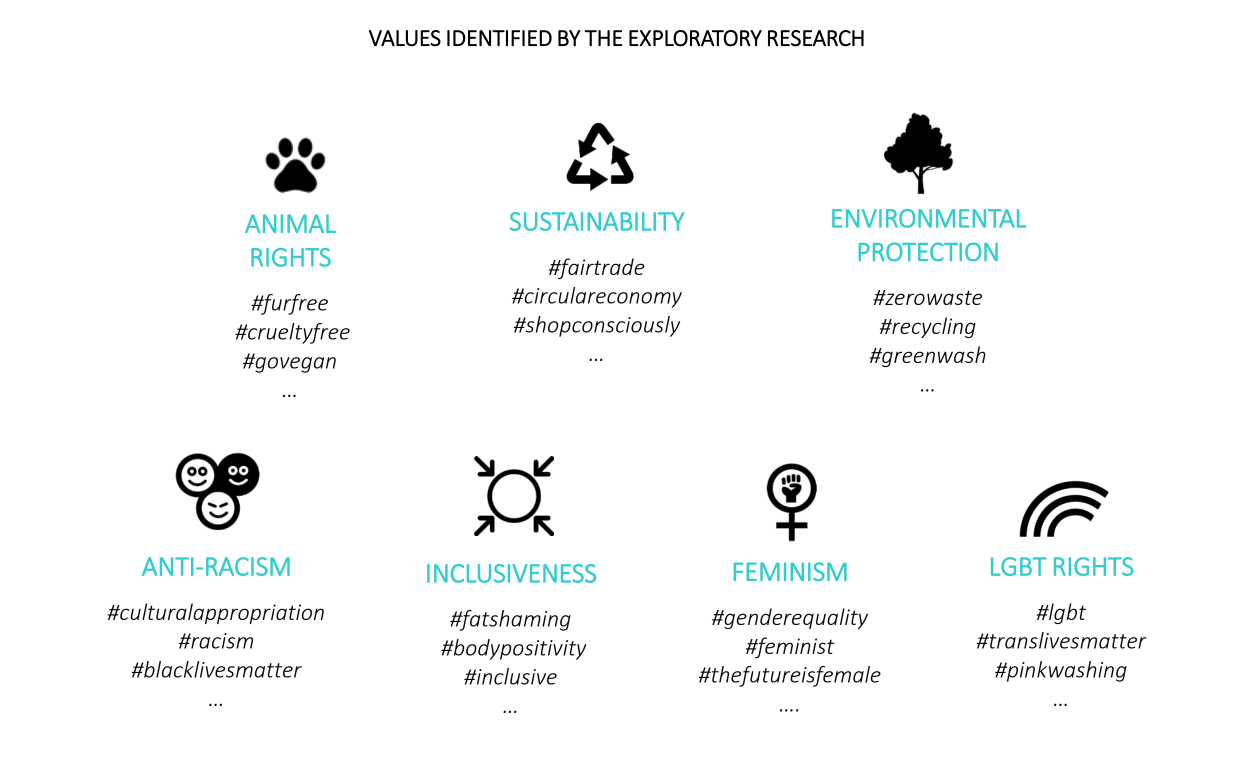 And we found that veganism fits three of the top 7: animal rights, sustainability, and the environment.

As mentioned earlier, veganism is a relatively new and controversial topic. Despite its popularity, veganism is still not widely understood. Perhaps people recognize the term, but they still have common questions that aren’t always easy to answer.

And for young people these days, social media has become a major source of information and answers. They may not trust advice from company websites, and the news is quickly losing trust with people of all ages.

But they do trust their friends. And they love to watch users who’ve already transitioned to veganism.

YouTube and Instagram are full of influencers answering every question imaginable, showing what they eat in a day, and proving that vegans can still live fulfilling and desirable lifestyles:

In the past, a movement might have needed news articles and television coverage to be able to share its message. But social media lets users:

Since veganism favors young people, and young people use social media in part to find information, the vegan message spreads quickly on these platforms.

There’s a clear desire to prove that veganism can be fun and interesting - not restrictive. And most importantly, that food can be just as exciting and delicious.

As if responding to a challenge, vegan chefs (professional and amateur) create colorful food that looks as good or better than the classic (omnivorous) version: 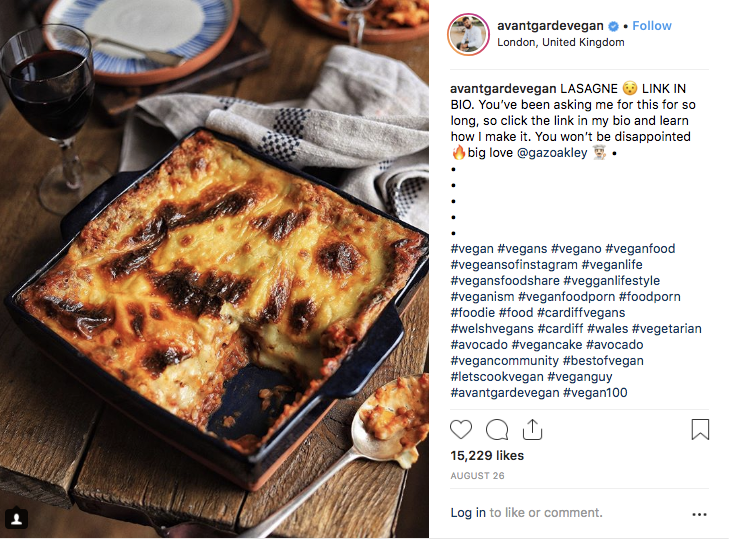 As Instagram becomes more popular, so too does veganism. But Pinterest also saw a 52 percent jump in pinned vegan recipes between 2015 and 2016. These image-based social platforms let vegans prove that the lifestyle isn’t as hard as it looks.

The clichéd vegan is preachy, tired, and annoying. But social media has let this community show that it can be interesting and enjoyable as well.

We’ll need further studies to find out. But this does go to show the power of social media in spreading social movements, trends, and sentiment.

Food holds a special place on social media. Users simply love to document, photograph, and share their eating habits with the world.

To date, more than 126 million Instagram posts use the hashtag #Instafood. Among these, topics such as gluten-free, dairy-free, and cruelty-free (collective known as “living free”) are hugely popular.

It’s not enough that your food looks good - it has to also be part of a regime or philosophy.

And avocados fit right in. One of the best-known “superfoods,” they’ve become rapidly more popular over the last half-decade. Now, the avocado is the second-most discussed superfood on social media (after the coconut).

And many of the reasons for its popularity seem to be the same as the vegan movement. First, it’s most popular among young people, with 63 percent of posts coming from 18-24 year olds.

Second, it’s photogenic. 90 percent of social media posts about avocados include an image or video. Users are proud of their avocados, and want you to see them.

And third, the avocado now comes with an ideology. It’s a superfood - every bite is packed with “healthy fats” and protein. In the same way that a vegan shares their ethical lunch with the world, an avocado enthusiast shows others the healthy choice they’re making.

Which brings us back to veganism:

In fact, vegans and veggie enthusiasts are the most likely users to post about avocados, followed by fitness addicts. These are growing, increasingly powerful social media communities - full of sophisticated users producing quality content.

The takeaway here is not to start producing exclusively vegan products. Although, clearly there’s a market out there.

Instead, there are three clear lessons we can learn from the vegan movement:

1. Find out what matters to your audience

Social media lets you speak directly to buyers and prospects, easier than ever before.

You want buyers to love and be proud of your messaging. That means you need to know how to build the right messaging for them. Learning about the values and issues your buyers care about helps you do exactly this.

If you stand for a cause, your customers will fight for you. 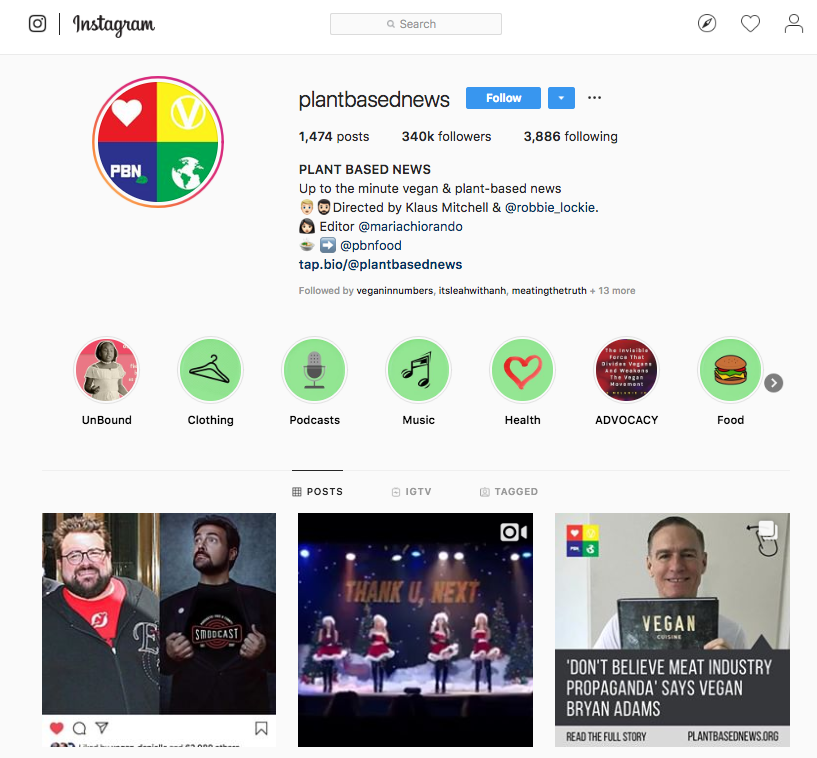 2. Find your social media communities and speak to them

We’ve seen how powerful social communities can be. Information spreads organically through them, with a high degree of trust.

So for brands, it’s essential to try to find these communities and reach them.

You may be able to do this on your own. You may even already know who you need to reach. But good social listening tools can help you spot patterns based on the topics you care about.

For instance, after the USA and UK, Australia talks about avocados most on social media. Coincidentally, Australia is also the third fastest-growing vegan market in the world.

The point is, if you’re able to speak to these communities, you’ll be able to market your products to the right people more efficiently.

So much of the rise of veganism comes down to its Instagram-friendly appearance. A movement that is essentially about restricting what you eat has been able to appear exciting and even beautiful.

If brands can do the same - present themselves as desirable - social media can become a major growth stream.

The key here is the same as it’s always been: if you want organic social media traffic, you need to create things that people want to share. More and more, this means image and video content.

The top viral posts on Facebook last year were almost all videos. A video tweet is 6x more likely to be retweeted than a simple photo. So visual social content - especially video - is pretty much essential if you want to have your posts shared.

This is also exactly the kind of content that speaks to communities. If your image or video gets picked up and shared by the right people, you’ll be able to achieve the kind of reach that every brand dreams of.

Understand what builds a social movement

This was an exercise in understanding what makes things popular on social media. In the case of veganism, it’s largely because its followers are young, they need information, and that information is presented beautifully on social media.

At their most popular, avocados displayed similar characteristics.

So what does your social media audience look like? And how can you reach them most effectively? We’d love to help you find out.

For more statistics, examples, and analysis, watch our webinar on demand: