A world without sports: The impact of empty stadiums on fans, players and brands 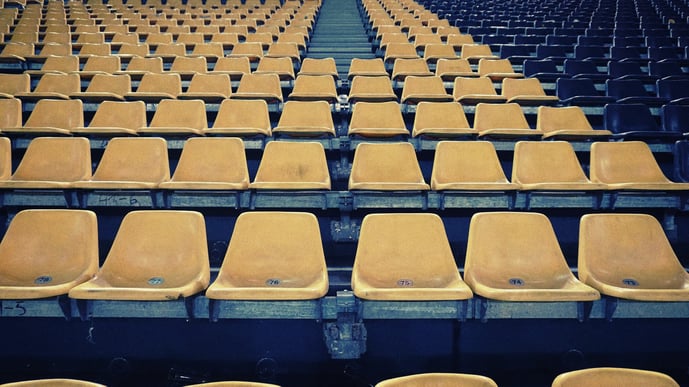 In a little under two months, sports fans went from enjoying some of the world’s most-watched events to being at home without any games or competition to watch. This timeline provides an eye-opening perspective on how quickly and significantly sports have disappeared from the world. March Madness was canceled, the Champions League and top football leagues across Europe suspended (France’s Ligue 1 was cancelled), and the Olympics have been postponed to 2021. As lockdown measures are beginning to be lifted in some parts of the world with others to soon follow, the likelihood of us enjoying a big sporting event live, in-person, and sometime soon seems nearly impossible. Does this mean sport has no place in consumers’ lives anymore? Hardly.

Online conversations about sports since January. The spike in March resulted from several suspensions and changes to major sports leagues/events around the world. Source: Radarly

Online conversations about sports and quarantine since January. Source: Radarly

Sporting events in 2020 were poised to bring huge marketing spending for brands across the world with prominent events such as the March Madness basketball tournament, UEFA’s Champions League, and the 2020 Summer Olympics in Tokyo at the top of the list. COVID-19 changed this.

Coca-Cola and P&G were set to be two of the largest sponsors at the Olympics and now those plans have been halted. This is the new reality for several prominent sports sponsors such as Toyota and large beverage companies like Anheuser Busch. Many businesses have readjusted their budgets to promote positive campaigns and the repurposing of essential goods or materials. Without sports and the in-stadium experience for fans around the world, we are starting to get a glimpse of what interacting with sports will look like when leagues re-start.

Baseball in Taiwan and Korea lead the way

While fans won’t be seen in American sports stadiums any time soon due to the severity of the outbreak, sports have started to slowly return in parts of the world where lockdowns have been lifted. Taiwan’s Chinese Baseball League and the Korean Baseball League are good examples of this. Just last week, the Taiwanese league began allowing a small number of fans into the stadium after playing without them for roughly a month. For now, the Korean Baseball league will continue without fans, and if one player tests positive the league will be suspended for three weeks. With the KBL being the larger and more popular of the two Asian baseball leagues, it “could provide a return-to-play road map for MLB”.

The implications of these returns go beyond the entertainment and excitement of sports with brands, sponsors, and teams having to come up with new ways to interact with fans that align with the new normal – showing support and appreciation for health care and essential workers, social distancing, and improved hygiene in social places.

The German Bundesliga resumed on May 16th, the Premier League is set to return in early June, the MLB is eyeing a July start date, and the NBA is hoping to make a decision about the season in the coming weeks. These major leagues will provide brands with a new opportunity to connect with fans since the lockdowns started. Whether it is food/beverage brands rewarding viewers with coupons for traditional in-game eats for social media challenges, sports apparel brands offering exclusive online discount codes, or promoting ads thanking health care workers, the options for positive messaging are endless. 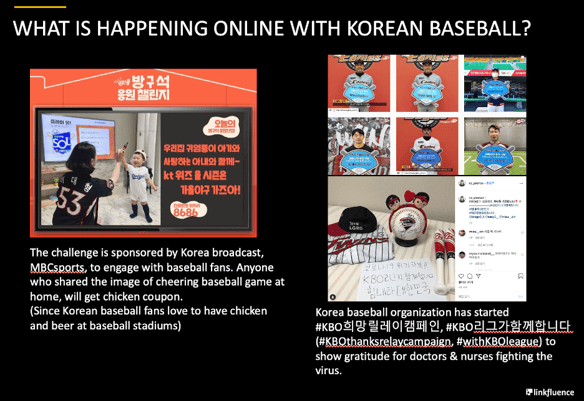 These types of messages have been seen across the Korean Baseball League since it began to play, and they are our best indication of what is likely to be seen as other leagues return. Could more people being at home lead to increased viewership and increased interest in sports as more leagues return? Many leagues are preparing for new and different ways to help more fans watch games – with free viewership options being considered to provide some much needed, live entertainment but also to discourage people from watching at a friend’s house who has access to the stream. 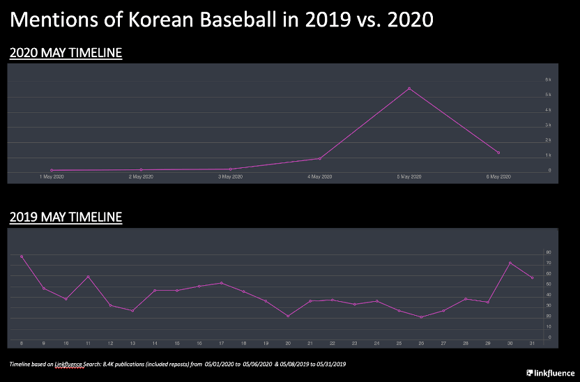 Given the increase in conversations about the Korean Baseball League from last year to this year at the same time, going from about 80 posts at its peak in May 2019 to 8,000 the day play started in May 2020, we’ll likely see even more significant interest with the major leagues returning in the coming weeks. The more online activity that occurs will provide brands another meaningful way to engage with fans. More specifically, teams and leagues could create Twitter surveys or discussion threads to gage the feelings fans have about what they want their experience to be like when they can return to stadiums and how they can replicate this while they are at home in the meantime.

Some of these behaviors have taken place in the U.S. for baseball fans even though the MLB season hasn’t started. Mentions of #openingdayathome skyrocketed on the originally planned first day of the season and fans still found ways to express that. Interestingly enough, fans have missed paying for the notoriously overpriced food and beverages found in baseball stadiums – a sign that even the negative aspects of in-game experiences are being appreciated for the deeper meaning.

Sports fans will remain sports fans, no matter what. Baseball fans are showing us that they are no different. It’s really interesting to notice the connections between the activity around the Korean Baseball League and the MLB as we see Korean fans participating online trying to win free chicken, and fans in the U.S. are enjoying their hotdogs and beer at home for what would have been opening day.

Sample of images from online posts on March 26th with “#openingdayathome and hotdog” Source: Radarly 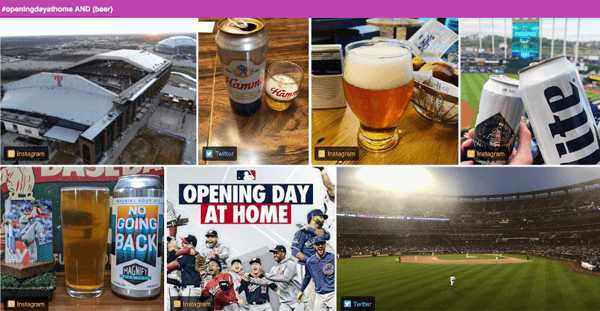 Sample of images from online posts on March 26th with “#openingdayathome and beer” Source: Radarly

It is interesting to notice the demographics of these posts fall directly in the category of young people that baseball has been targeting in recent years to help strengthen a weakening fanbase that has traditionally included mostly older men. The new circumstances could provide the MLB, and relevant brands, the opportunity to connect with the Gen-Z population online – the most influential generation on social media. Budweiser’s tweet on #openingdayathome is a perfect example of how brands can engage with younger baseball fans in a light-hearted way that will also create nostalgia for older fans. 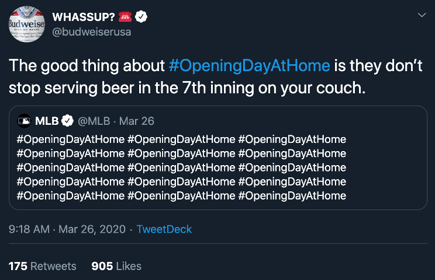 Unity remains at the forefront of sports

As sports begin to slowly return, the world continues to prepare for the drastic differences that will be seen throughout the sports world until the pandemic is completely over. One thing is for sure: fans, players, and brands are all still extremely active and should remain active, especially on social media. While each group wants sports back to normal for their own reasons, the sports community seems focused on returning to play in a smart and safe way that is still enjoyable for everyone involved.

Lebron James, one of the most popular athletes in the world, originally was not interested in playing NBA games without fans, but he has adjusted his perspective as the situation has evolved since the season was suspended in March. Cristiano Ronaldo has taken a different approach and being the most followed person across all social media doesn’t hurt! Ronaldo has been active online supporting health care workers, encouraging people to stay home, and inviting people to join him in the #livingroomcup – a fitness challenge he started last month. With two of the most influential athletes remaining active online, it will help keep fans eagerly waiting for them to return to their respective arenas.

Players, fans, and brands all have different roles to play right now, but there is one thing that they all have in common. They all want sports to return. Whether it is with or without fans in the stadiums, fans will be watching and cheering. Brands will be engaging with these fans, maybe more than ever before. Players will most definitely be competing. And sports will continue to bring people together, as they always have.